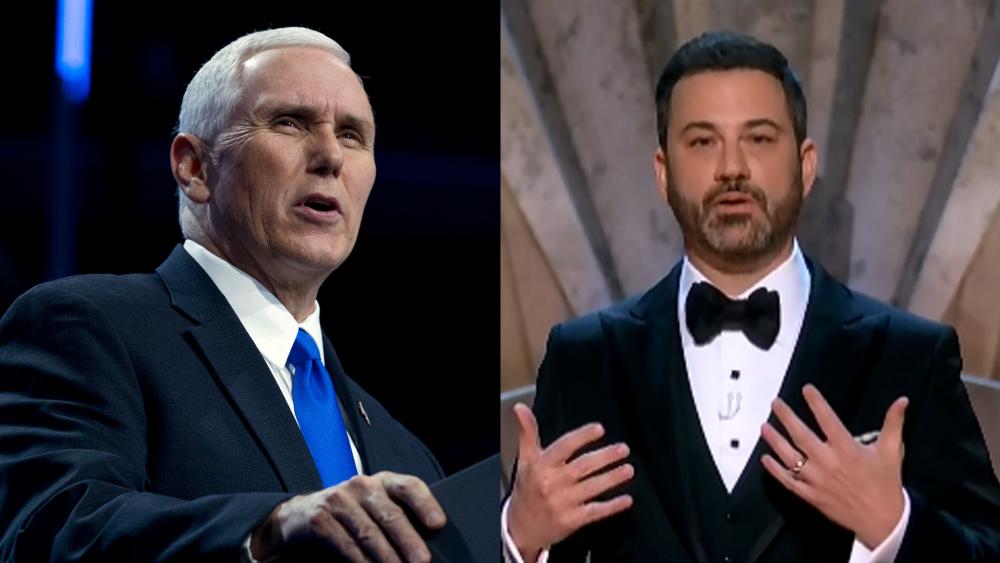 Vice President Mike Pence has come under attack once again by media leftists for his conservative Christian beliefs – this time it happened at the Oscars in front of millions.

Academy Awards host Jimmy Kimmel made a joke about a film that features a homosexual romance between a teen boy and a man – a story that some might consider pedophilia.

And Hollywood loved it, laughing at his joke and giving the controversial film, "Call Me By Your Name," an Oscar for best adapted screenplay.

During a politically correct evening that was laced with anti-Trump political statements and marred by low ratings, apparently, the one group Hollywood still finds it acceptable to offend is Christians.

Kimmel's joke about Pence stood out, in part because Pence was recently attacked by Joy Behar, host of ABC's "The View," who said he was mentally ill for talking to God.

Kimmel piled on to the attacks against Pence's Christian beliefs saying, "We don't make films like 'Call Me By Your Name' to make money. We make them to upset Mike Pence."

The audience erupted with delight, revealing that Hollywood clearly agrees with Kimmel's comment. After all, Joy Behar led the way with her disparaging comment and faced few if any consequences, even though tens of thousands of upset viewers contacted ABC about it.

While much of the evening was spent on the #MeToo movement, decrying the horrible abuses against women by powerful men in Hollywood, the Oscars revealed there's still a segment of the population that's acceptable to sexually target – teen boys.

Kimmel's comments were revealing along those lines as well because he joked about the young age of the actor who played the 17-year-old in the man-boy gay "love story." Kimmel said the actor was missing the children's show "Paw Patrol" just to attend the Oscars.

If someone is young enough to be joked about as watching a children's show, why does Hollywood think it's okay for that young person to be in a sexual relationship with a predatory older man?

Actor Corey Feldman doesn't think it's okay. He has revealed that he was sexually abused by men in Hollywood when he was a boy actor, and he tweeted his disgust with Hollywood's love affair with the film.

I HAVE BEEN INVITED 2 MANY OSCAR PARTIES 2DAY, HOWEVER I CHOOSE 2 ABSTAIN. NOT BECAUSE IM WORRIED ABOUT MY SAFETY THERE, OR BECAUSE IM AFRAID OF RUNNING IN2 SOME1 IM AVOIDING. BUT I CHOOSE 2 IGNORE THE OSCARS IN LIGHT OF THE "CALL ME BY YOUR NAME" BEST PICTURE NOMINATION!

I GUESS I WOULD B SATISFIED IF THEY USED THE TIME INSTEAD OF HONORING A MOVIE ABOUT BLATANT GROOMING & MANIPULATING A YOUNG INNOCENT BOY INTO A WORLD OF HOMO EROTICA, 4 HONORING THE VICTIMS & SURVIVORS & THOSE WHO GAVE THEIR LIFE & INNOCENECE 4 THE INDUSTRY & THE ACADEMY!

Overall, the evening exposed Hollywood's true colors on several levels: praise for sexual perversion and excitement at the bashing of Christians.

True, there's nothing new about attacks on Christianity by the Left. It's been an ongoing theme from liberals and Hollywood elites for years.

The only thing that makes Behar's and Kimmel's comments different is how brazen they were, and how much the audiences at both events laughed. Clearly, their fans are on board with the Christian-bashing.