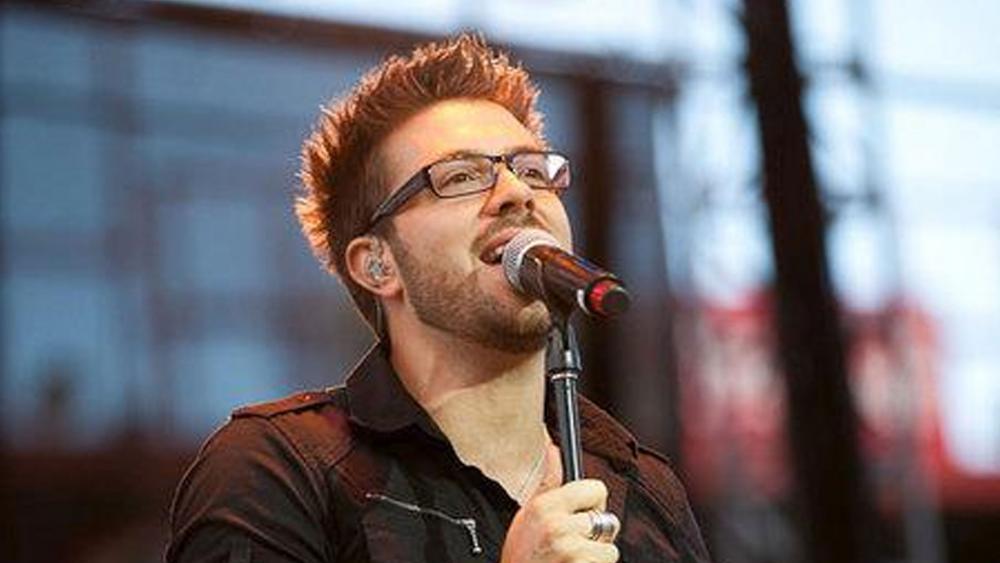 Danny Gokey is known for his extremely vulnerable performances which resonated with the American Idol fan base, and which turned him into a household name. He won and has been nominated for everything from the Grammys to the American Country Awards. The biggest award came just a few months ago—when he won the K-LOVE Male Artist of the Year award against the best in his industry.

Flying high on so many wins, including his just-released Christmas album, I had a chance to catch up with Danny.

Shawn: You recently won Male Artist of the Year for the K-LOVE awards. How did that feel?

Danny: It felt incredible, especially with the caliber of artists in the category. When you hear them, you think How can I ever have a chance? I am a big fan of these people and listen to their music. It was like a God wink. It's really hard to quantify.

Shawn: You have lived pretty transparently. This vulnerability—where you let us invade the privacy of your personal life—doesn't feel that common. What allows you to give yourself permission to be so vulnerable?

Danny: One of the biggest motivators to be transparent is that in Psalm 139, it says God has written our story before we are even born to live our days. I have found so much value in sharing my story to try and help others connect to their own stories. I want to try and relate to the people who would listen to me or watch me, and I have been through some really dark times. There were times I couldn't sense God at all, but God didn't stop. I think people really connect to this and it helps them.

Shawn: One of these moments of vulnerability was during American Idol. Your first wife, Sophia, passed away from heart disease a few weeks before you auditioned. You didn't come across as sharing this to get ahead on the show; but you won American Idol with your voice and with this vulnerability, which caused us all to relate to your music choices even more. What is amazing is that many years later, when you had your fourth child, a little boy, you told everyone that he was born on Sophia's birthday. Sharing that is sensitive too since you are remarried and have four children with your beautiful wife, Leyicet.

Danny: Yeah, my son Emmanuel was born on my first wife's birthday. During that eleven-year season of losing Sophia, I did American Idol and got a record deal, then lost a record deal. It was one of the most painful seasons of loss in my life. When the Lord told us to name my son Emmanuel (which means "God is with us"), and then he was born on Sophia's birthday, it meant so much more—because I felt like God was just stamping my life with "I have been with you." I really want to inspire people to say "I know life might be hard, but God is here." I really want to encourage people that God is doing much more behind the scenes on their behalf, and I think my sharing and showing how I overcame is doing that— by my testimony and the blood of the Lamb.

Shawn: How does your relationship with God help you in the entertainment industry?

Danny: There is one prayer that Moses prayed: If you don't go with me, I don't want to go. That has been my prayer since I was young. It's this thing of, "God, I need you to stay at the center of this all. I have to go with your presence." His presence sustains me.

Shawn: When you come to the point of winning awards in Christian music but also getting recognized by the Grammys, what are you looking at for the future, and what are you dreaming of at this place in your career?

Danny: When I was on American Idol, I saw it as a movement. I said this in my exit interview, but I couldn't explain it. God has been recently connecting the dots and the pieces for me. In some ways the music has been a forerunner for other projects—I am currently producing a TV show. I think of Bono creating Red. That was a movement, but he used his musical career to synergize it. The TV show is called Better Than I Found It. I started it after my nonprofit couldn't get the funding to house 200 homeless families in a hospital we were given. We were housing them there, but we had to shut the door. I was discouraged, but it was the catalyst for dreaming of this show. I didn't know that God was going to open the door to this movement of finding people like us, telling their stories, and resourcing them—people who are trying to do amazing things in their communities. The TV show, I believe, will help people connect with incredible people who are using their lives to make a real difference, and it will be so entertaining and touching to watch.

Danny: I felt myself coming back in TV in 2015, and my wife and I began to dream of this show. We are producing it ourselves, believing that God is going to find our network and relationships. Recently, as we took a leap of faith in other areas of our lives, my music began to have some incredible people backing us. God connected us to one of the biggest promoters of our genre. When I saw all these pieces of my music career born in a greater way and coming together, it gave us more faith. The biggest radio station started backing me, the branded tour went out, and it gave us the push we needed to start moving the TV episodes, which will be starting in March next year. The stories are unreal!

Shawn: What is the Gokey family up to since all of this increase of notoriety and influence?

Danny: Being a dad is my favorite thing. Our life is wrapped around school and kid stuff. I try and show unconditional love every way possible to my wife and four kids.

Shawn: What is your biggest challenge?

Danny: Trying to figure out how to work this hard with family and music—the great balance. It's been my biggest producing year. I keep looking at my wife and thinking I want to figure this out better. Work-life balance. The goal for the future is that when our TV show comes out and the tour comes out, we'll have as much impact but be doing less. We hope to work on more focused projects so we don't have the drain on our lives.

Shawn: How does your wife keep that balance?

Danny: Leyicet is my biggest cheerleader. She is an intercessor, a prayer warrior who is also super hilarious. She hardly ever says no to me. When she was pregnant for the fourth time, it was the first time she said it was all getting a little much. I was overwhelmed with the workload I had. So we have begun to visualize what the future could look like. She is the kind of girl who handles my crazy. We've begun to make new plans.

We met when I got dropped from my record label on the day I was supposed to shoot a music video she was going to be in, and they canceled my music video. We started dating. She wasn't in it for my career. She loved me and was believing with me, and in 2014 BMG signed me. It was hard because no Christians would sign me. The guy who signed me told my manager, "Please don't let me lose money. I need to break even." Leyicet stood with me and dreamed with me and believed for us. I ended up taking off and being the main record moneymaker for that label.

Shawn: So many people who were on these reality shows that you were on don't have a full-time career in music, but you are killing it. So many people have won on these shows only to fade away. Why you?

Danny: From a young age I have felt the call of God. Lots of people feel that and I am not saying mine is unique, but God uses the foolish things of the world to confound the wise. When you have faith, it makes you a visionary to believe for things you would never believe normally. When I was on Idol, it gave me a passion to find a medium whereby I could reach people who would never walk through the doors of the church. I felt him say, "Danny when you do music, do it in a way that creates hope in people who don't understand the gospel. Do it for Christians and everyone else." I signed a country record deal, but that label dropped me. God transitioned me the day I got dropped, and I ended up getting signed when I knew I was supposed to go past just Christian music.

On all the projects I work on, I keep in mind that God wants to do it in a way that's not normal; I'm not to follow the normal patterns, and his way is not going to look like everyone else's. God rebuilt me in a way that he wanted, not in a way I would have ever thought. This industry becomes a burden if God is not the center of it; it will eat you up and spit you out.

Shawn: You are signed to the biggest record label in the world, and you have a new album out. You are doing a Christmas tour right now that has packed-out crowds, not to mention you won a GMA Dove Award for Christmas Album of the Year back in 2016. What is your favorite thing about this album, Christmas Is Here?

Danny: I am most excited about the duets I did—one with Kari Jobe, one with David Archuleta, and one with my tour partner Natalie Grant. My son was also on it, Danny Jr, which was amazing! I do a Christmas tour every year, and it's always one of my favorite things we do.

Shawn: You have many people who follow you who really love you and your family. It goes beyond fandom, but Christians are inspired by you. I know many would want to give back if they could through prayer. What can we pray for you?

Danny: Protection over my life. The power of prayer really protects people in the front lines. We are representing the gospel on different stages, and with the number of people we are representing the gospel to, we need prayer. I would love prayers of protection over my family, and for our health, and that my family remains really teachable and we stay humble.

Let's do just that and pray for Danny and the Gokey family.

Bolz is an Author, TV Personality, Prophet, Speaker, Producer, and the founder of Bolz Ministries. See more of his work below: