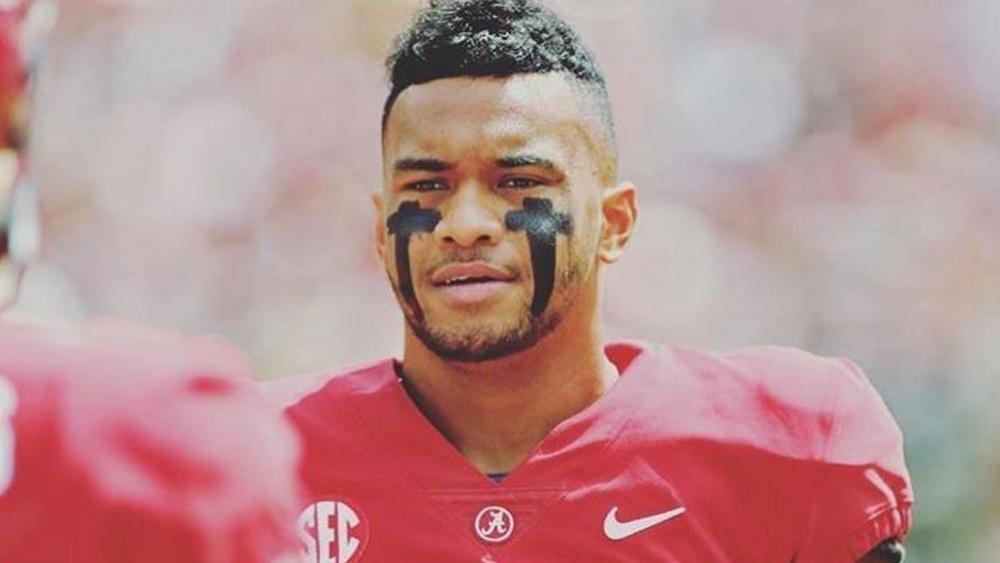 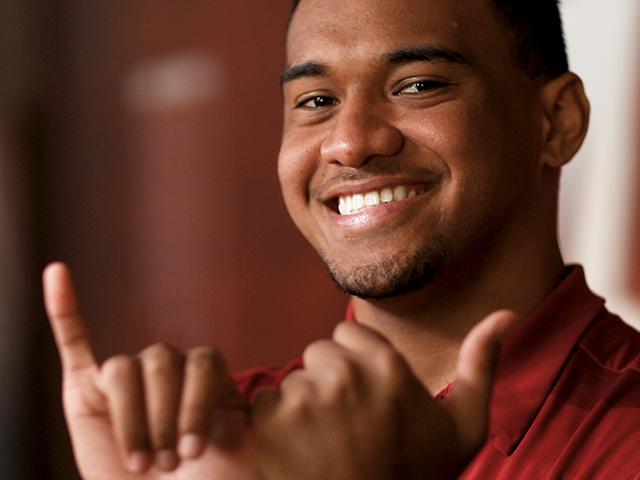 The star quarterback of the Alabama Crimson Tide is back and better than ever. And he's opening up to CBN Sports about his faith, his journey to fame, his leadership secrets, and a prophecy that was fulfilled in his life through a huge championship win.

Tua Tagovailoa, the living legend of Tuscaloosa, kicked off the opening game of his 2019 college football season with an impeccable performance against Duke: 4 touchdowns, no turnovers, completing 26 of 31 passes for 336 yards.

It's just another reminder of how Tua burst onto the national scene after one of the greatest performances in college football history. He came off the bench to lead Alabama in a come-from-behind victory in the 2018 championship game. Now he's back for another crack at the title and talking to CBN about what it takes to get there.

Tua's sudden rise to prominence was stunning – when the Samoan-born, Hawaiian-raised freshman back-up, stepped up with a 2018 overtime, game-winning championship throw that elevated him to the forefront of college football.

"My life has accelerated in many ways. Especially after you come off the bench, you know, no one really knows who you are! How people treat you is totally different. How people view you is totally different. Now you're at a pedestal where every little thing you do now is under a microscope, you know! It's not the same anymore. Something I've always dreamed – you know, when I was a kid, winning a national championship. Never thought I'd get the opportunity to be on Sports Illustrated!"

Question: "How are you different do you think? How have you grown from that freshman season?"

Question: "And then it comes with it, there's the chatter. There's the pressure, NFL teams tanking for Tua - how do you compartmentalize that and live your life as a college student?"

Tua: "Well I think you got to be able to brush a lot of those things to the side and you got to worry and focus about what's at stake now. The things that I need to do to prepare me for that next level, footwork, to my eyes, to things I need to do in the film room. If I can take care of the little things with what I'm doing now I can be that much better. If that professional life does call me – I'll be sure to be ready!"

Question: "What is it about the Alabama Football Program that draws the best out of both player and person?"

Tua: "Just the standard that we have set here. How Coach Saban goes about doing things. You know everyone thinks Coach Saban is this guy where – 'wow you guys got to fear him because he's going to yell at you'.  But you know, Coach Saban only does that because he expects the best and he understands that you're more capable than what you do and this is how I got to correct you, you know, so you don't do it again. So, it's just being held to a standard here."

Question: "What does the Alabama southern life uniquely offer a life-long Hawaiian resident?"

Tua: "Well there's many similarities and there's many differences. When you go to Birmingham its almost like the city and then you go elsewhere you got that country life and in Hawaii the North Shore is kind of a country life and then you go to Waikiki and that's the city life. I say a lot of people out here are very true to what they believe. Football here is pretty big and out there in Hawaii it's pretty big too, so not too much of a big difference."

Question: "And Tua, what does that mean to you?"

Tua: "When I was little, asking my parents what it meant – Tuaninga was this bird, so Manu in Samoan is bird. And Olepola in Samoan is mountain. So, this bird who circles the mountain – he's just the protector of it!"

Question: "What is the Samoan way?"

Tua: "They say, 'Fa'asamoa'. Samoan Way is respect! Respect is the biggest thing in our culture. Our dad always told us growing up - people will always remember you from the way you walk. From the way you talk. And from the way you hold yourself. And that doesn't go just for you but it goes towards representing your family as well!"

Question: "The Samoan devotion to family is revered. How do you explain that value to teammates, to friends, whose family life is broken?"

Tua: "It's a lot harder to explain it to them only because it just comes natural to us. And so I'd say, every time my family's around - just being able to love on each other - those guys being able to look and see, you know, how we treat one another our brothers, our sisters, our moms and our dads – you know being able to treat them with respect."

Galu Tagovailoa: "It's all about giving back and being obedient to the things, you know, that will make you successful in life."

Diane Tagovailoa: "For our family it's basically faith, family and football! You know, so everything is based on our faith - grounded and rooted in that."

Question: "Vision to see, core to throw from – does that transfer over into life – having vision and having the footing to handle?"

Tua: "Oh yeah it definitely does! Football when you're a quarterback your base is the biggest thing -- being able to throw and follow through, having your ground really centered, where the ball's going to go and how hard it's going to travel. Your foundation is what you're always going to revert back to. For me, my foundation is my faith and my family. You know my faith is what keeps me motivated when I can't even stay motivated myself. I'm just trying to play football, just trying to be able to take care of my family and be able to use my platform for the right reasons."

Question: "What do you admire most about Jesus Christ?"

Tua: "The greatest gift that God could've ever given us was his son! It's not just a matter of hearing what Jesus Christ is. It's a matter of getting to know who Jesus Christ is! To really understand and really feel the identity of who you are because of things that He's done. And I'd say you can only find your identity through Him, if you know Him."

Question: "The story with your grandfather goes that he once proclaimed, when you were an infant - that your name would become great, world renowned, giving recognition to God's honor. When you look back on that 20 some years later, where you're sitting today - how does that resonate with you?"

Tua:  "That's only something that God could have done. My grandfather was someone who we really go to before games for prep talks and soft words – you know, just go out there with the heart of David or things like that. And when our grandfather would tell us this, you know, we really wouldn't know what it meant. But, you know, as you grow older you start to understand the revelation of what he's been saying and they all fall into one thing - knowing that what we believe in - is something much bigger than us!"