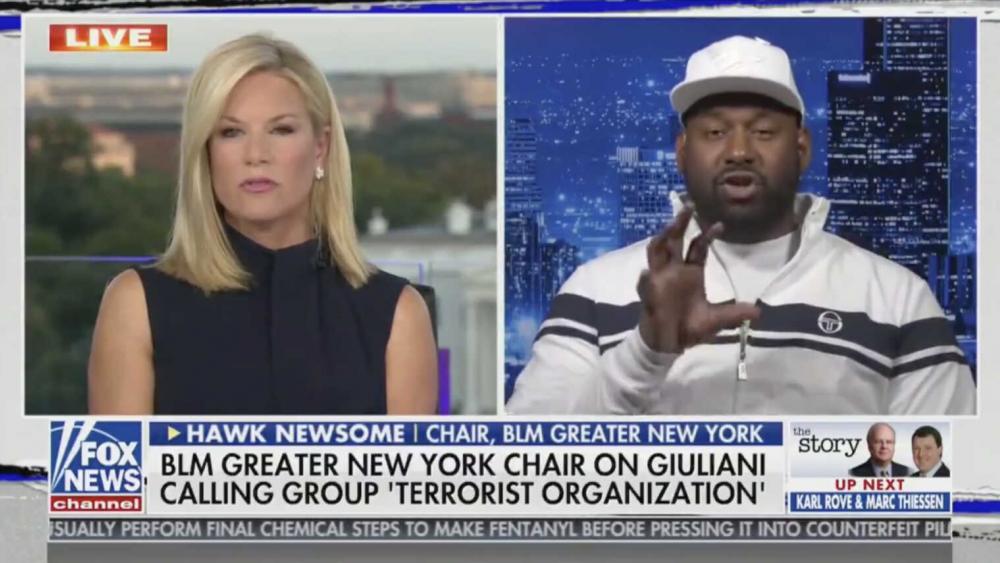 Fox News anchor Martha MacCallum shut down a tense interview with prominent Black Lives Matter leader Hawk Newsome after he refused on multiple occasions to answer her question about whether looting is ethically and morally wrong.

MacCallum posed the question to Newsome, whom she’s interviewed before, after playing a clip of Chicago Black Lives Matter leader Ariel Atkins, who said she doesn’t care “if somebody decides to loot a Gucci or a Macy’s or a Nike because that makes sure that that person eats.” She went on to call looting a form of “reparations.”

BLM Chicago Leader on the looting of stores: "That is reparations.... anything they want to take, take it because these businesses have insurance..." pic.twitter.com/uB9GAGmkLu

Newsome immediately struck a defensive tone, and rather than answering the Fox News host’s question, began lecturing her on her language.

The New York-based Black Lives Matter leader told MacCallum to “be very careful” and to “let me speak.”

BlackLivesMatter of NY’s @IamHawkNewsome refuses to condemn rioting/looting, let alone even answer the question directly: “Do you think it’s OK for a country to profit off of slaves?" [via @marthamaccallum] pic.twitter.com/TtoqHv4wBl

At that point, MacCallum cut Newsome off, acknowledging his desire for government-sanctioned reparations from private corporations and then asked that her guest answer her singular question, noting, “I listened to you, and now I want you to answer my question.”

Newsome instead continued talking over the anchor.

“Do you think, sir, do you think, do you agree that it’s OK to go in and break the windows at Gucci or Macy’s or Nike because it makes sure that that person eats and that person has clothes?” MacCallum asked again. “That was my question to you. Is that ethically OK to you?”

“Before I answer that,” he said, “I want to ask you this: Do you think it’s OK that America kills people in their homes like Breonna Taylor and our politicians do not do anything about it?”

MacCallum confirmed she, of course, does not think such actions are acceptable and pointed to a recent survey showing a majority of respondents support peaceful protests against racial injustice.

“But you’re not answering my question, which is whether or not it’s OK to take away people’s livelihoods because you deserve the stuff that’s in the broken window, OK? There’s two different issues here, and I wish you would answer my question, which you said you would, but you didn’t.”

Newsome, once again, turned to the tu quoque fallacy — commonly referred to by those on the left as “whataboutism.”

“Do you think it’s OK for a country to profit off the backs of slaves and to pay reparations to other peoples and deny black people reparations?” he said.

At that point, MacCallum called it quits and abruptly cut the feed to Newsome, quickly ending the interview with the Black Lives Matter activist.

“You don’t want to answer questions about looting and stealing and broken windows, so.”