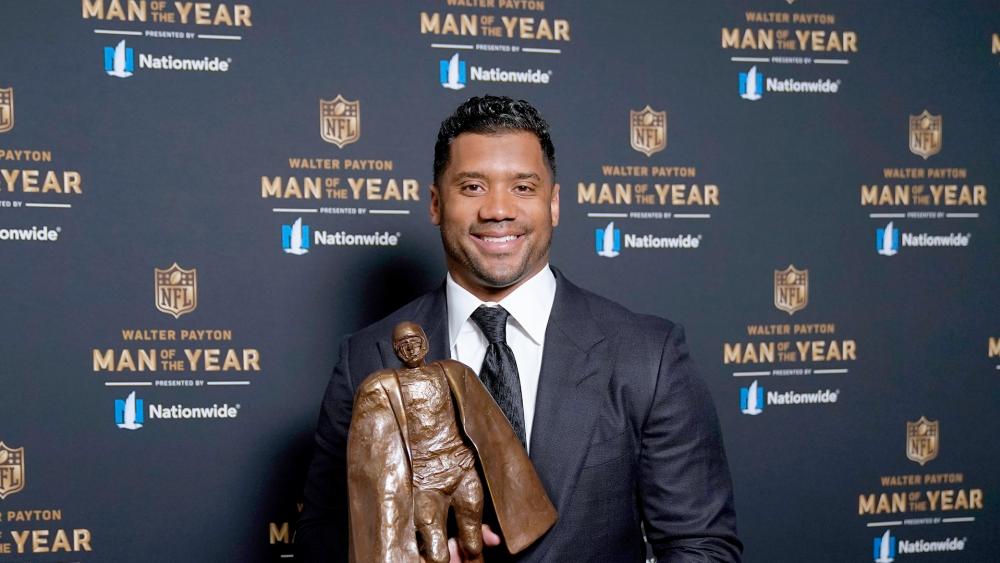 Seattle Seahawks quarterback Russell Wilson poses with his trophy after winning the Walter Payton NFL Man of the Year award during the NFL Honors ceremony as part of Super Bowl 55 in Tampa, Fla. (AP Photo/Charlie Riedel)

Seattle Seahawks quarterback Russell Wilson rephrased a scripture from the Bible's New Testament when he accepted the 2020 Walter Payton NFL Man of the Year Award this weekend.

Wilson, 31, was selected from the annual group of 32 nominees, one from each team, for his COVID-19 relief efforts and philanthropy to other charitable organizations.

In his short acceptance speech, Wilson credited his father Harrison who passed away of complications of diabetes in 2010.

"Dad, I know one your favorite athletes of all-time was Walter Payton. The player he was, but more importantly the man he was, the leader, the giver, the person. Man, dad, I wish you were here for this award," he said. "This moment. Dad, I can remember you telling me in the car one day, 'Son, love changes things.' Well, dad, you were right. I wish you were here to tell the world that in the toughest of times. 2020 was the most difficult times in history."

Then Wilson paraphrased a part of 1 Corinthians 13:4 into his address.

Wilson is the first quarterback to receive the NFL Man of the Year since the New York Giants' Eli Manning in 2016 and the first Seahawks player since Hall of Fame Wide Receiver Steve Largent in 1988, according to NFL.com. He was first nominated for the award six years ago.

Recognized for Efforts to Feed the Hungry and Fight Cancer

Among his many plaudits, the Seahawks quarterback was recognized for his efforts to feed children, families, and the elderly. Wilson and his wife Ciara donated $1 million to Feeding America, the largest hunger-relief organization in the country.

He also partnered with Wheels Up to create the Meals Up campaign in an effort to combat food insecurity. With his Why Not You Foundation, Wilson joined with Door Dash, Rockefeller Foundation, and United Way Worldwide to enlarge Ride United to deliver supplies and food to 175 communities across the country.

The Seattle Times reports Wilson's foundation has donated more than $9 million to Strong Against Cancer in order to fund lifesaving immunotherapy treatment since 2014.

Since his 2012 rookie season, Wilson has visited Seattle Children's Hospital every Tuesday during the season. He has often said one reason he began visiting Seattle Children's hospital was the influence of his mother, Tammy, who was an emergency room nurse while he was growing up in Richmond, Virginia, according to the newspaper. Wilson is estimated to have visited at least 600 patients during his nine years with the Seahawks organization.

"We're incredibly thankful for everything he has done for our patients and families throughout the years,'' Seattle Children's said in a press release. "Even during the pandemic, he still takes time to visit children in the hospital through Zoom."

Wilson will receive a $250,000 donation to the charity of his choice. All other 31 nominees receive up to $40,000 donated to their charity of choice. All donations are courtesy of the NFL Foundation and Nationwide.

The Walter Payton NFL Man of the Year Award recognizes an NFL player for his excellence on and off the field. The award was established in 1970. It was renamed in 1999 after the late Hall of Fame Chicago Bears Running Back Walter Payton, according to NFL.com.

Came to Christ as a Teen

Wilson became a follower of Jesus Christ when he was a teenager. As CBN News has reported, Wilson has been outspoken about his faith from the very beginning of his football career and he believes he plays for a higher purpose.

"In terms of my faith I believe I'm here for a reason," he told CBN. "I believe God placed me in this city for a reason. That never wavers for me, I'm going to trust that the Lord's put me here."