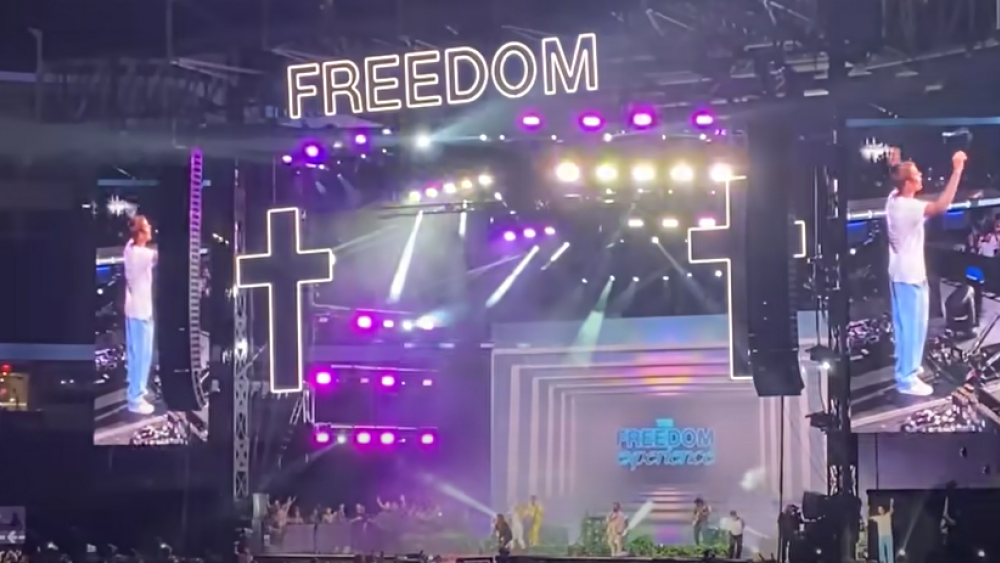 More than 20,000 volunteers across Southern California were invited to a worship concert following a day of giving back to their communities last weekend.

Justin Bieber headlined the Los Angeles Freedom Experience alongside Kari Jobe and her husband Cody Carnes. They led thousands to lift their hands to Christ … many for the first time.

Bieber and Jobe were joined by other top worship artists including Tori Kelly, Jaden Smith, and Chance the Rapper at the SoFi Stadium in Inglewood, California.

Jobe shared clips of the worship event on Instagram, writing: "Still so moved about last night." She included comments made by Bieber while at the worship concert.

Bieber also collaborated with Kelly, who is featured on much of his recent gospel album.

"The Freedom Experience, what an incredible night filled with so much love!!" Kelly wrote on Instagram. "Thank you to @1dayLA & the thousands of volunteers who went & served this city. thank you to the entire crew who made this event possible!"

"Thank you JESUS," she added.

Bieber sang alongside Jobe and Carnes during their anthem, "The Blessing."

The 1DayLA outreach was also part of the event, bringing together thousands of volunteers in an effort to give back to their communities.

After a day of community service, volunteers were invited to attend a worship event hosted by Jason Kennedy of E! News.

According to Billboard, Bieber was motivated to be a part of the 1DayLA movement "because of his strong and long-held belief that giving of ourselves in service to others is one of the most important things we can do. Bieber is committed to the powerful idea that a movement for change can start with individuals helping one another and their community."

Judah Smith with ChurcHome, who is also Bieber's pastor, led in the worship experience.

Members of the faith community, as well as celebrities, attended the concert.

Boxer and mix martial artist Conor McGregor and his family were seen at The Freedom Experience praising Jesus.