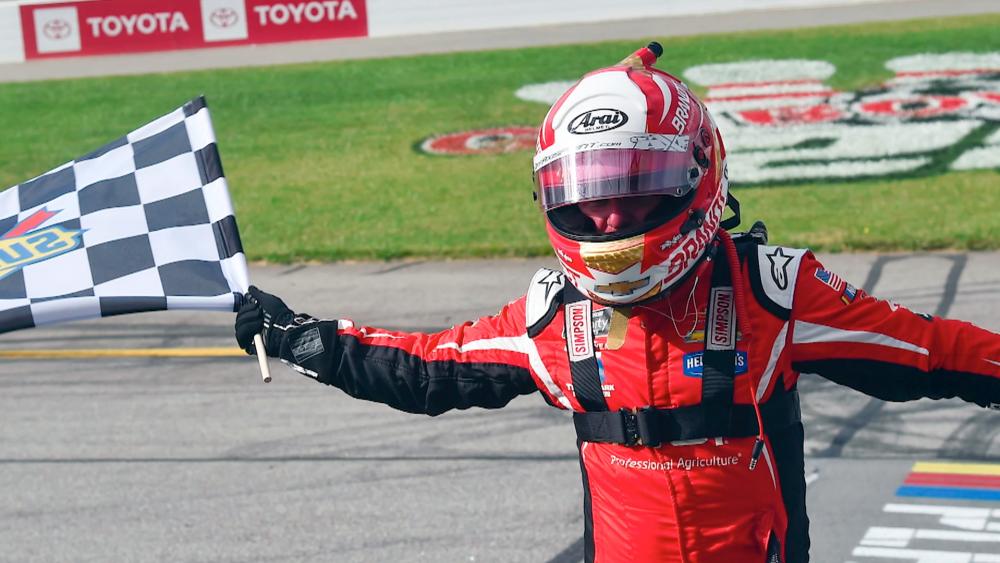 NASCAR driver Justin Allgaier was raised at the races. "I don't remember life without racing," he told CBN.

His dad, Mike, sold racing tires and young Justin dreamed of one day getting behind the wheel.

"I remember some of the earliest days going to the racetrack as a really young child and just remembering the feeling of what that was like," says Justin. "I have a buddy. We'd introduce ourselves and we'd make jokes about 'one of these days we're going be there, we're going to be doing that.'"

His racing debut came at the age of five, driving a quarter-midget roadster. By age 12, Justin became a five-time quarter-midget champion. Though racing was important, the Allgaier's priority was their faith.

Justin says, "I never got into racing because of fame or because of money or because of the perks that might come with it. For me it was all about going to the racetrack, competing, competing at a high level, and using the gifts that, you know, I had been given."

While Justin's NASCAR aspirations were fueled by his passion for the sport, the financial cost of racing began taking its toll and threatened his dreams.

"We were scrapping together every dollar that we could put together to be able to go to the racetrack," says Justin. "And I knew that something was stressing my dad out and I could kind of see it, I kind of feel it."

"And he said, 'Hey, listen. Your mom and I are out of money. We've spent every dime we can spend to go racing. We've done everything we can do and it's just not meant to be. So, you know, make the most of everything we've got right now because I don't know if we'll ever be able to do this again.'"

"And, you know, having aspirations of obviously making it to the Cup Series and being in NASCAR, that was kind of a devastating blow."

Justin says he asked God for help and got an immediate answer. Before his next race, he was introduced to the director of competition at Penske racing, one of the largest teams in the sport of NASCAR.

"We went out, I raced and of all days, I ended up winning that day," says Justin. "It was a fantastic race for us. A racetrack that we shouldn't have won at, but I ended up winning that day. And 24 hours later, literally, 24 hours later I was sitting in Detroit, Michigan with Roger Penske, going over on a legal pad writing down different things that, you know, would ultimately end up being my contract and an opportunity to race full-time in NASCAR."

Justin says God affirmed his racing dreams and it was even better than he imagined.

"God closes doors all the time and, you know, as selfish as we are, we're typically not willing to let that door close, right?" says Justin. "But on the other hand, there's a lot of times where you make peace with closing that door, and then the door kicks wide open and it's even, you know, ten-fold of what you thought it was going to be."

Today Justin is one of the premier drivers in NASCAR's Xfinity Series, driving for JR Motorsports. In March of this year, he won the Echo Park 250 at the Atlanta Motor Speedway.

Justin is thankful for both the gifts and opportunities God has given him.

He says, "I have no reservations about where my talent comes from and the opportunities that I'm given, where they come from. You know, it's definitely a gift of God. I mean, you can see trophies behind me and those are awesome, and I love looking at trophies and reminiscing at old stories from different races. But on the other hand, they're just pieces of metal. And when I'm gone  they're going to tarnish and rust and probably get thrown in the trash someday, and when it's all said and done you have to be thankful for the opportunities and the people that you meet and the opportunities that you're given."

"You know, I think what I want people to know is just that I'm a believer in Christ, you know. That's just been my goal since I started racing and it's carried all the way through."