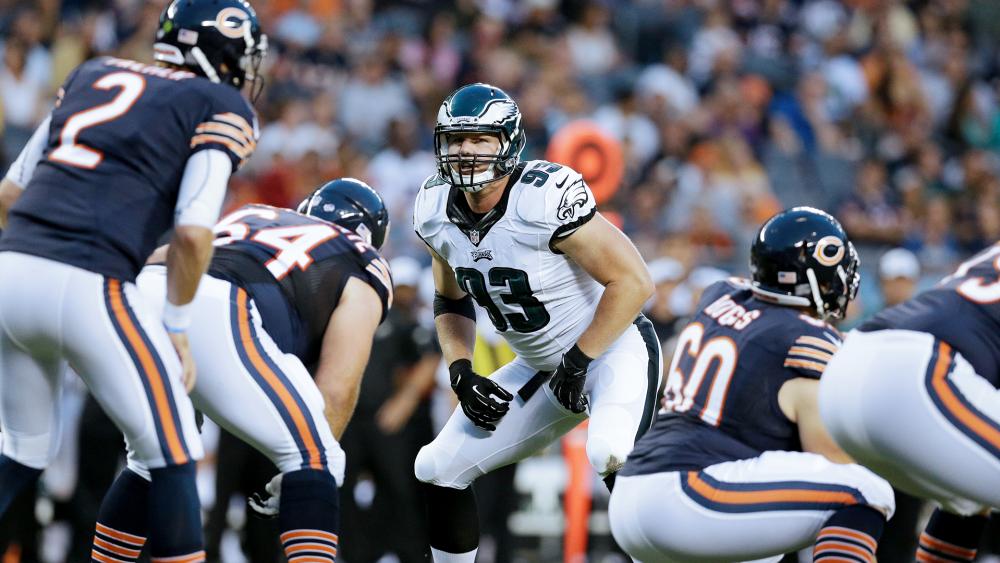 Philadelphia Eagles defensive end Brandon Bair (93) waits for the snap in the first half of an NFL preseason football game against the Chicago Bears Friday, Aug. 8, 2014, in Chicago. (AP Photo/Nam Y. Huh)

A former NFL player just happened to be in the right place at the right time on Thursday and ended up saving the life of a man after the semi-truck he was driving was struck by a train, setting his rig on fire.

The accident occurred around 5:45 pm on Thursday in St. Anthony, Idaho.

Former NFL defensive end Brandon Bair rushed to the aid of a man trapped in a flaming semi-truck minutes after it had been struck by a train in Idaho on Thursday. https://t.co/NDCz62XENw

"I was on Highway 20 driving to my business when I saw the train hit the truck. There was an explosion right away, and the train was pushing the truck down the tracks," Bair told EastIdahoNews.com. "I got on the phone with 911 and started driving down the median to get to the front of the train when it stopped."

The former football player stopped to see what he could do to help. He ran towards the semi after hearing a voice inside the burning cab.

Bair told the newspaper he made an immediate decision to go inside to get the driver out. He said he climbed halfway into the wrecked vehicle through a small rear window.

"I ran up to the window and saw dripping hot flames all over inside of the truck. I could see a guy in a seatbelt and was able to reach in and get it off of him. He was talking, and I told him we had to get out of here now," he said.

Bair realized Jensen was pinned inside the cab. The pair worked to free Jensen and the 6-foot-6-inch, 260-pound former football player was able to pull him to safety through the window.

"We walked away, and within seconds, the fire on the roof fell down inside, and the whole seat and cab went up in flames. A few minutes later, there were a couple big booms and explosions," Bair said.

Jensen was listed in stable condition on Friday at a local hospital, according to ESPN. Idaho State Police are investigating the accident.

Bair said he called his wife as he drove home.

"I was able to hold it together and be tough, but then I got a little shaky when I heard her voice," he said. "Being able to go home and put my arms around my kids – it hit me. You never know what's going to happen in life, and this shows you should hug your family every chance you get."

The former pro football player told the newspaper he doesn't consider himself a hero, but he thinks it was not just sheer luck he happened to be passing by.

"All I can say is this guy was supposed to live. I'm a man of faith, and I've learned to listen to your gut and the promptings you get," Bair said. "The Lord wanted him alive. Things could have gone different, a million different directions, but things worked out on his behalf. That's my conclusion. Whether it was me or someone else, he was supposed to live."

ESPN reports Bair, 36, played college football for the University of Oregon before he signed with the Kansas City Chiefs in 2011.  He also played for the Philadelphia Eagles and the Oakland Raiders before retiring in 2016.

He currently lives in St. Anthony with his wife Jordan and four daughters and is the general manager of Henry's Fork Homes. During the summer, Bair also hosts football camps for teenagers.