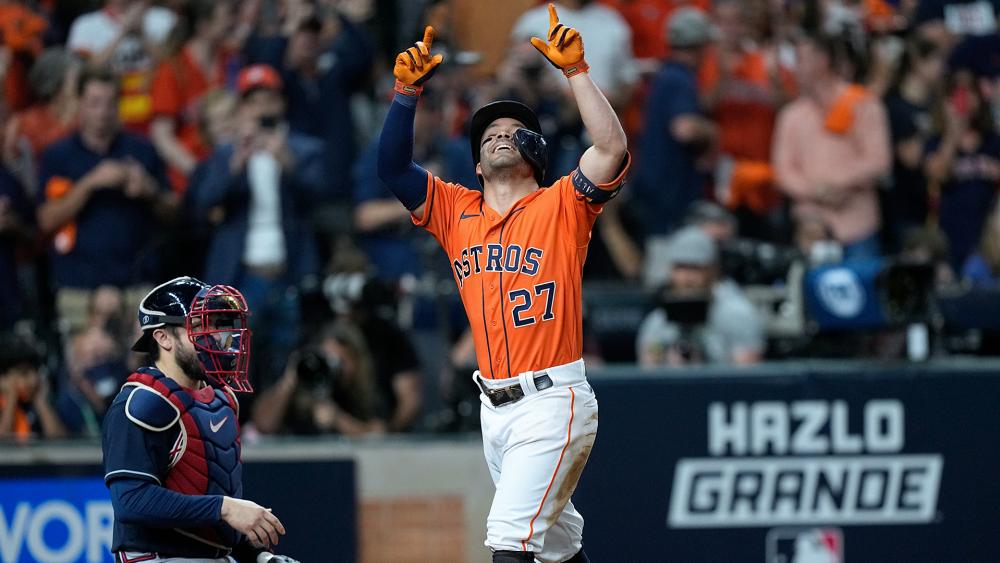 Houston Astros' Jose Altuve points to heaven after a home run in Game 2 of baseball's World Series between the Houston Astros and the Atlanta Braves, Oct. 27, 2021, in Houston. (AP Photo/David J. Phillip)

The Houston Astros have tied up the World Series after a solid performance in Game 2 against the Atlanta Braves on Wednesday night. Astros second baseman Jose Altuve was a big part of that win.

Altuve kicked off his team's comeback with a double, scoring the first run of the game right after that. Later, he slammed a home run in the seventh inning to help his team win the game 7-2.

Baseball scouts once said Altuve was too small to play pro ball, but he has proved them all wrong. How did the 5' 6" slugger swing it into the major leagues? Faith is central in his Cinderella story.

The average height of a major leaguer is roughly 6 feet. So when Altuve blasted his way into the majors in 2011, he rocked the baseball world with a smile.

"I really wanted to do it, and if God give me the ability to play, it was because he wanted me to go all the way through," he said. "And I thank God for everything because he's real. It's hard to believe that what you dreamed as a kid is real life now."

By 2012, the "little giant" was an all-star. So how does Altuve do it? How does someone who's not supposed to be able to play in the majors compete consistently every day? His answer is simple – prayer.

"Before I leave my house every single day, I ask God for health for my family and for me," he told CBN Sports. "And then when I'm about to play the game I just pray and I ask God to keep every single player and every single people on the stands healthy and that we just can go there and compete in a good way."

In 2017, Altuve helped the Astros win their first World Series Championship in franchise history. Now as he fights with his team for another title, he knows he's a blessed man because of his faith. He's making sure to keep his priorities in order with baseball holding the 3rd spot, behind his family at 2nd, and his faith in Christ at 1st, which he says helps him bring everything home and in order.