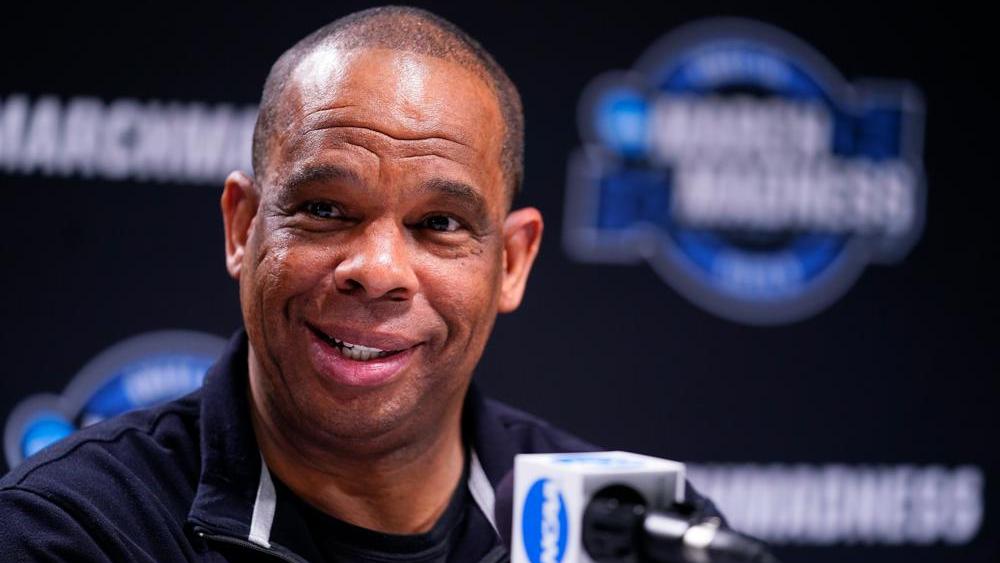 North Carolina men's basketball head coach Hubert Davis is in his first season with the Tar Heels and he couldn't be prouder of his players.

UNC is in the middle of an impressive NCAA Tournament run, making it all the way to their first Final Four in five seasons. It marks the team's first appearance in the Final Four since they won their sixth national championship in 2017.

Davis, who played for the Tar Heels from 1988 to 1992, was overcome with emotion after their Elite Eight win.

"I just desperately wanted this for them," he said. "I love these guys so much. They trusted me in my first year, they allowed me to coach them and allowed me to be in their life."

He continued, "I'm here because of them. It has nothing to do about coaching, it's all them and I'm just — it's tears of joy being able to be in their lives."

In a postgame press conference, Davis was asked about the North Carolina coaches he played for and the positive influence they had on him.

"One of the things that I do is pray all of the time that Jesus would put good people in my kids' life, like Coach Smith, Coach Guthridge and Coach Williams," Davis said. "People that genuinely care for you, that there's no hidden agenda, they're genuinely on your side."

“One of the things that I do is pray all of the time that Jesus would put good people in my kids’ life."@UNC_Basketball head coach Hubert Davis is anchored in prayerhttps://t.co/5FlNP5b7XX pic.twitter.com/ojcn4RRcyi

The 51-year-old coach hasn't shied away from opportunities to share his Christian faith, including at a press conference in April introducing him as the new coach of the Tar Heels.

When asked to briefly talk about his faith and how it plays into the job, Davis said it's "the most important thing."

"My faith and foundation is firmly in my relationship with Jesus. It just is. And my mother was a Christian and she begged me to go to church growing up. And I didn't want to go. I wasn't interested in it. My mom used to always say that Jesus had a plan for me, plans for hope and a future, plans not to harm you, plans to prosper you — Jeremiah 29:11. And at the time growing up, I didn't understand it and I didn't listen to it."

Davis explained that his mother passed away when he 16 and he developed a hatred toward God. He said the bitterness continued into his first two years at UNC because he couldn't understand how a loving God would take away his mom.

"One of the things that (Tar Heels Coach Dean) Smith used to do was make all the freshmen go to church," Davis pointed out. "And as I went to church, only because Coach Smith and (assistant) Coach Guthridge encouraged me to go to church, I started to understand what my mom was talking about. I started to understand the sacrifice that Jesus made for me and how much He loves me, and two days before my junior year of college, I became a Christian."

On numerous occasions, Davis has called his coaching job "missionary work" and tends to redirect attention away from him and toward his players.

"As I've said before, I look at this job as missionary work," Davis said at a press conference. "I've been given an opportunity to be the head coach of this program and be a part of this program for the last 10 years. Every day I get a front-row seat to be able to help out these kids, and it puts me in a place of humbleness and thankfulness and appreciation to be a part of their lives."

UNC will play the Duke Blue Devils on April 2.