60 Million Italians on Strict Lockdown in Latest Measure Against Coronavirus 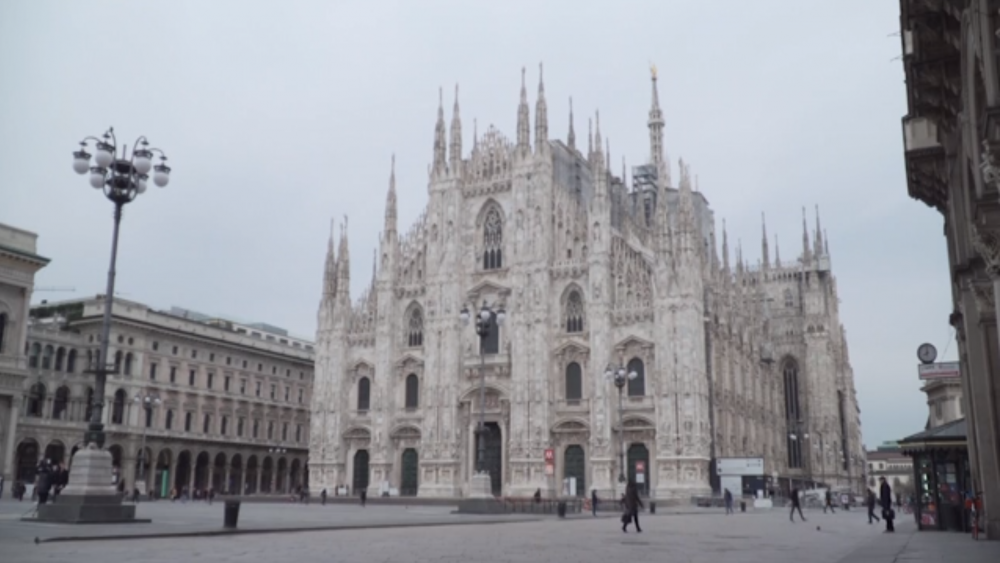 Conte said Monday night that a new government decree will require people throughout the country of 60 million people to demonstrate a need to work, health conditions or other limited reasons to travel outside the areas where they live.

The restrictions will take effect on Tuesday and, like those already in place in northern Italy, will last until April 3., he said.

"There won't be just a red zone,'' Conte told reporters referring to the quarantine order he signed for a vast swath of northern Italy with a population of 16 million over the weekend.

"There will be Italy" as a protected area, he said.

The nationwide decree also extends school closures in Italy until April 3. Schools in the center and south of Italy that were closed because of the virus had been slated to reopen on March 16.

Italy registered 1,807 more confirmed cases as of Monday evening, for a national total of 9,172. With those numbers, Italy again overtook South Korea as the country with the most cases outside China. The number of people with the virus who died increased to 463.

The premier also took to task the young people in much of Italy who have been gathering at night to drink and have a good time during the public health emergency that started on Feb. 21.

Under the weekend decree that applied to regions in the north, pubs, restaurants and cafes are required to close at dusk. Now the mandatory early hours will affect all of a locked-down Italy.

On Saturday night, alarmed at rumors over a quarantine in the north, many Italians fled the targeted regions in the northern "red zone." was put under lockdown on Sunday. Some 16 million residents live in that first lockdown, in the north, in populous Lombardy, which includes Milan, and 14 provinces in the north, including that of Venice. Monday's extension now c

Tuesday's restrictions also extend closure of schools until April 3. Until Tuesday, schools in the center and south of Italy were slated to reopen on March 16.

THIS IS A BREAKING NEWS UPDATE. AP’s earlier story follows below.

MILAN (AP) - Confusion reigned in northern Italy over who could go where and under what circumstances Monday, the first business day since the government locked down a vast area with more than one-quarter of the Italian population in a desperate attempt to contain the country's coronavirus epidemic.

Skyrocketing infections that cemented Italy as a global virus hot spot and superficial compliance with earlier restrictions covering 11 towns led the government to extend its quarantine order to encompass the entire Lombardy region and 14 provinces in the Piemonte, Veneto and Emilia Romagna regions.

Streets in Milan, Italy's financial hub and the main city in Lombardy, were unseasonably quiet. Check points were set up at the city's main train station to screen travelers. People at Milan Central Station were being required to sign a police form, self-certifying they were traveling either for ‘’proven work needs,’’ situations of necessity, health reasons or to return to their homes.

‘’Until a few days ago, the thinking was the alarm would pass in some weeks, we just need to follow the rules. Now, we need to explain to citizens that the situation is very, very serious, our hospitals are at the point of collapse,’’ the mayor of the city of Bergamo, Giorgio Gori, told RAI state television.

People circulating inside the city and also in the provinces beyond were subjected to spot checks to ensure they had valid reasons for being out. Violators risked up to three months jail or fines of 206 euros ($225)

The message from authorities was an increasingly blunt ‘’Stay at home.’’

Italy registered 1,807 more confirmed cases as of Monday evening, for a national total of 9,172. With the latest numbers, Italy again overtook South Korea as the country with the most cases outside China. The number of dead in Italy also increased by 97 to 463.

Italian Premier Giuseppe Conte signed a decree early Sunday attempting to lock down 16 million people in Italy's prosperous north - more than a quarter of Italy's population - for nearly a month to halt the virus' relentless march across Europe. The extraordinary measures, which also apply to the city of Venice, will be in place until April 3.

Under the new decree, casual errands are out. The time-honored Italian tradition of an espresso at the corner cafe - gone. Customers now are required to take tables, if possible, the one furthest from the bar. The evening aperitif is also frowned upon; bars close at 6 p.m. Even going to the grocery store is a major expedition.

The regions affected by the decree are among the most productive in Italy. Industry leaders worry about a perception being created abroad that all business was shut down and commercial deliveries of exports can't be made.

The civil protection agency has emphasized that commercial freight was not affected by the crackdown. But that does not address what happens to drivers who leave the containment area. In theory, they would be subject to 14-day quarantines once they return from trips outside he red zones.

For travelers and commuters, procedures at the main train station have been tightened significantly since the early Sunday morning decree. Now, pairs of police officers in masks backed by pairs of masked armed soldiers check tickets and documents of people arriving and departing.

Patrizia Peluso arrived at the station Monday afternoon from a five-day holiday with her two children in Lapland, Finland. They had to reroute their return flight through Rome after airlines canceled flights to Milan. They grabbed a Naples-Turin train in Rome, connecting two cities not subject to the quanrantine, and were among the few passengers to get off in Milan.

Before letting them pass the gates, soldiers confirmed their residence in Milan and asked their reason for traveling.

‘’I explained we were away on holiday and I have to return to work. If not, I wouldn’t have come back at all,’’ Peluso said.

The first thing she has to do when she gets home: buy groceries.

‘’We have nothing to eat at home. But I hear you have to wait in lines to get into stores,’’ she said. ‘’I hope that everything goes well.’’