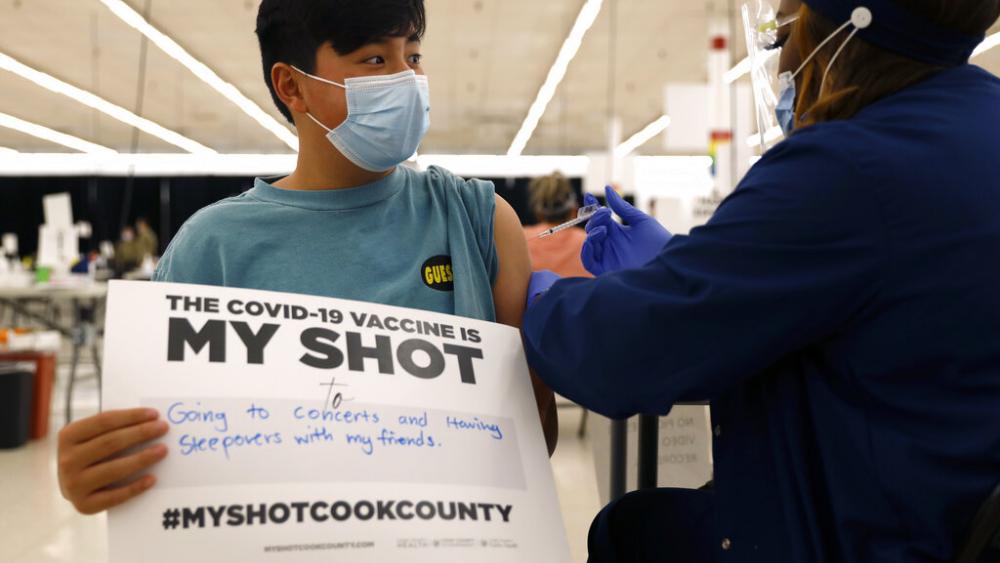 FILE - Lucas Kittikamron-Mora, 13, holds a sign in support of COVID-19 vaccinations as he receives his first Pfizer vaccination at the Cook County Public Health Department, May 13, 2021 in Des Plaines, Ill. (AP Photo)

The U.S. is expanding COVID-19 boosters as it confronts the omicron surge, with the Food and Drug Administration allowing extra Pfizer shots for children as young as 12.

Boosters already are recommended for everyone 16 and older, and federal regulators on Monday decided they’re also warranted for 12- to 15-year-olds once enough time has passed since their last dose.

But the move, coming as classes restart after the holidays, isn’t the final step. A panel to the Centers for Disease Control and Prevention is expected to decide later this week whether to recommend boosters for the younger teens with a final decision by Dr. Rochelle Walensky, the CDC’s director.

The FDA also said everyone 12 and older who's eligible for a Pfizer booster can get one as early as five months after their last dose rather than six months.

FDA vaccine chief Dr. Peter Marks said even though serious illness is uncommon in younger teens, a booster will help them avoid that risk — while also helping reduce the spread of omicron or any other coronavirus mutant.

“Hopefully this will be not just a call for people to go get their booster shot,” but for the tens of millions of unvaccinated Americans to rethink that choice, Marks said. “It's not too late to start to get vaccinated.”

The FDA based its latest booster decision largely on real-world data from Israel that found no new safety concerns when 6,300 12- to 15-year-olds got a Pfizer booster five months after their second dose.

Likewise, the FDA said even more data from Israel showed no problems with giving anyone eligible for a Pfizer booster that extra dose a month sooner than the six months that until now has been U.S. policy.

The chief safety question for younger teens is a rare side effect called myocarditis, a type of heart inflammation seen mostly in younger men and teen boys who get either the Pfizer or Moderna vaccines. The vast majority of cases are mild — far milder than the heart inflammation caused by COVID-19 — and they seem to peak in older teens, the 16- and 17-year-olds.

Marks said the side effect occurs in about 1 in 10,000 men and boys ages 16 to 30 after their second shot — but that a third dose appears less risky, by about a third. That's probably because more time has passed before the booster than between the first two shots, he said.

While the FDA didn’t consult its independent scientific advisers before making that decision, the CDC's own advisory panel is sure to closely weigh how much benefit this age group is likely to get before backing the extra shot.

Vaccines still offer strong protection against serious illness from any type of COVID-19. But health authorities are urging everyone who’s eligible to get a booster dose for their best chance at avoiding milder breakthrough infections from the highly contagious omicron mutant.

Children tend to suffer less serious illness from COVID-19 than adults. But child hospitalizations are rising during the omicron wave -- most of them unvaccinated.