Many people are frustrated with today's cancer treatments. They are expensive, painful and often just don't work.

It involves cutting out carbohydrates, beginning with the worst carb of all - sugar.

Dr. Fred Hatfield is an impressive guy: a power-lifting champion, author of dozens of books, a millionaire businessman with a beautiful wife. But he'll tell you his greatest accomplishment is killing his cancer just in the nick of time.

"The doctors gave me three months to live because of widespread metastatic cancer in my skeletal structure," he recalled. "Three months, three different doctors told me that same thing."

His wife Gloria remembers it well.

"It's a horrible, horrible feeling to have someone tell you that the person you love only has three months to live and you're not going to be with him any more," she said.

While Hatfield was preparing to die, he heard about an anti-cancer diet, also known as metabolic therapy. With nothing to lose, he gave it a try and was shocked when it actually worked.

"The cancer was gone!" he exclaimed. "Completely. To this day there's no trace of it. And it's been over a year."

Although it wasn't easy, Hatfield stopped eating carbohydrates, which turn into glucose inside your body. Cancer cells love glucose and need it so badly, that if you stop giving it to them, they die.

Hatfield's cancer recovery, however, was not a surprise to Dr. Dominic D'Agostino, who researches metabolic therapy. When he and his team of scientists at the University of South Florida removed carbohydrates from the diets of lab mice, the mice survived highly aggressive metastatic cancer even better than when they were treated with chemotherapy.

"We have dramatically increased survival with metabolic therapy," he said. "So we think it's important to get this information out."

It's not just lab mice. Dr. D'Agostino has also seen similar success in people - lots of them.

"I've been in correspondence with a number of people," he said. "At least a dozen over the last year-and-a-half to two years, and all of them are still alive, despite the odds. So this is very encouraging."

All cells, including cancer cells, are fueled by glucose. But if you deprive them of glucose, they switch to the alternate fuel, ketone bodies.

People like Hatfield, who want to deprive their cells of glucose and fuel them with ketone bodies instead, eat what's known as a ketogenic diet. It consists of almost zero carbohydrates, but lots of natural proteins and fats.

Gloria said the food on the ketogenic diet is in every grocery store and is pretty easy to prepare.

"You can go online and there's cook books," she said, "It's clean eating. Just very clean eating, none of the sugars, the salts, the trash food."

"Natural" proteins are ones that are in their original form. On the other hand, "processed" meats, like cold cuts and hot dogs, are off-limits because often carbohydrates have been added to them.

Similarly, "natural" fats are whole foods, like olive oil, avocados, and nuts. Stay away from "trans" fats, such as shortening or margarine, any oil that is hydrogenated. Trans fats are man-made.

Sometimes people are afraid to try the ketogenic diet because they think eating fat like this is bad for your heart. But more doctors say as long as it's natural, fat is good for you, even saturated fat like coconut oil and butter.

"Is cholesterol the major cause of heart disease?" cardiologist Dr. Stephen Sinatra asked. "Absolutely not."

In his book, The Great Cholesterol Myth, Dr. Sinatra said the real cause of heart disease is inflammation, which comes from eating too many carbohydrates.

So by cutting back on carbohydrates and eating natural fats and proteins, you could improve your heart health and even wipe out cancer.

The ketogenic diet has also proven successful in treating epilepsy. For more information, go to The Charlie Foundation.

For additional resources and recipes for delicious ketogenic diet foods, such as breads and cupcakes with all natural ingredients, check out the following resources: 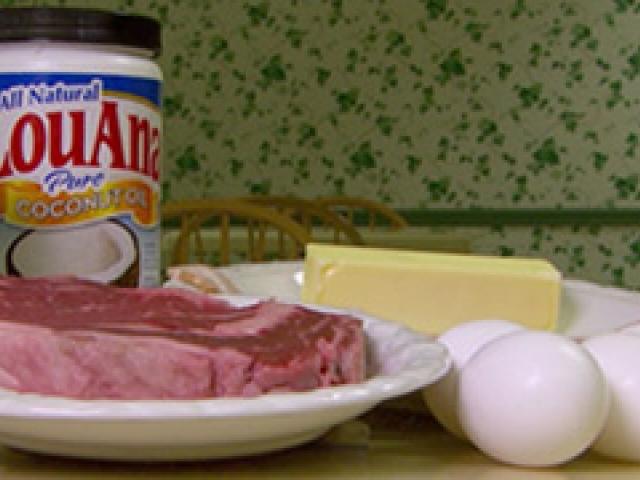