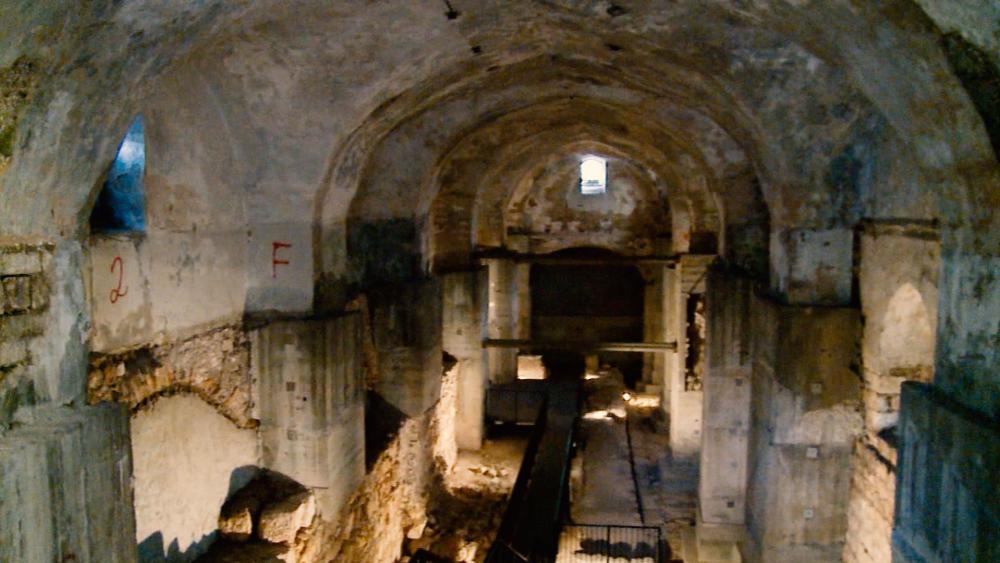 Note: This story was originally published in April 2017, but we are sharing this with you again to celebrate Easter.

JERUSALEM, Israel -- These are busy days in Jerusalem, as the city marks both Pesach (Passover) and Holy Week, leading up to Easter.

Inside the Old City walls, discoveries at Herod's Palace have caught the attention of Jewish and Christian scholars. More than 2,000 years of history are recorded in one building, where Pontius Pilate may have sentenced Jesus.

At the western edge of the Old City, near the Jaffa Gate, the Tower of David stands above the walls.

In 1999, archaeologists found a building while working on the Tower of David Museum. It turned out to be the site of King Herod's Palace. Records on its walls go back to the First Temple period, even before the time of Jesus and the Roman governor who sentenced him to the cross: Pontius Pilate.

For years, experts suggested that Pilate had handed down his death sentence from the Antonia Fortress in the northeastern part of the Old City, where the Roman Praetorian Guard was housed.

But recent evidence uncovered at the site of King Herod's Palace at the Tower of David, indicates that the luxury-loving Pilate was more likely to have pronounced judgment from there.

"It's only logical to assume that the local Roman government here in Jerusalem -- Pontius Pilate -- sat also in the palace of Herod because he needed all those facilities, all this luxury," Re'em told CBN News.

Re'em is familiar with the long history on the walls of the palace.  It includes graffiti scrawled by prisoners held by British authorities, who used it to incarcerate people in the 1940s before their mandate over the region ended.

Pointing to the sides of the cavernous edifice, Re'em said, "Until now, those impressive walls are the only remains from Herod's Palace."

Especially for Christians, the meaning is intensified as the faithful around the world remember the Lord's crucifixion and resurrection.

David Pileggi pastors Christ Church, just a few steps away from the Tower of David Museum.  He believes it's almost a foregone conclusion that Jesus would have been brought to Pilate at the palace.

"We don't know exactly where Jesus was tried, where he had his interview before Pilate, but we do know it's somewhere in Herod's palace," Pileggi said.

"We know the palace of Herod the Great eventually became Roman property after Herod's death, and that every year Pontius Pilate would come from Caesaria to Jerusalem here, during the time of the Passover, to oversee the security of the city during the festival that the Jews called the Feast of Jerusalem," he continued.

"And it was at this time, if there was going to be trouble in Jerusalem, it would be during the Passover holiday," he explained.

In a way, according to Pileggi, the Tower of David Museum encompasses the entire life story of Jesus.

"Scholars have been saying for a half a century that the life of Jesus begins at the Tower of David, or what was then Herod's Palace.  That's when the Magi [the Wise Men] came to visit King Herod.  And his life ends, basically, when Pontius Pilate sentences him to death, pretty much in the same location.  So there are some very interesting ironies in this story," Pileggi said.

Pileggi also cautions that Christians shouldn't give in to the notion of feeling sorry for Pilate because of the biblical account that he found Jesus had done nothing wrong.

He described Pilate as a wicked and cruel ruler. Legend from the early Church has it that Pilate was later exiled by the Romans to the south of France, where he committed suicide. Pileggi asserts it would be "poetic justice" if he did.

Israeli archaeologist Renee Sivan was also working at the site when Herod's Palace was discovered. Sixteen years later, she told CBN News she still is struck by the power and opulence of the place and the often tragic history of cruelty and brutality inside the city walls.

Pileggi calls the Tower of David Museum the best in the city, and says tourists would do well to start their journey there.

"It really helps to unpack the complex history and geography and culture in this city," he said. "Now we have the extra bonus of having the very place where Jesus was sent to execution by Pontius Pilate, and this will help Christians better visualize those monumentous events that happened to Jesus the Messiah -- Jesus of Nazareth -- in the last week of his life."

Meanwhile, just a couple of miles away from the Tower of David Museum stands the Mount of Olives, where scripture says Jesus will come again.