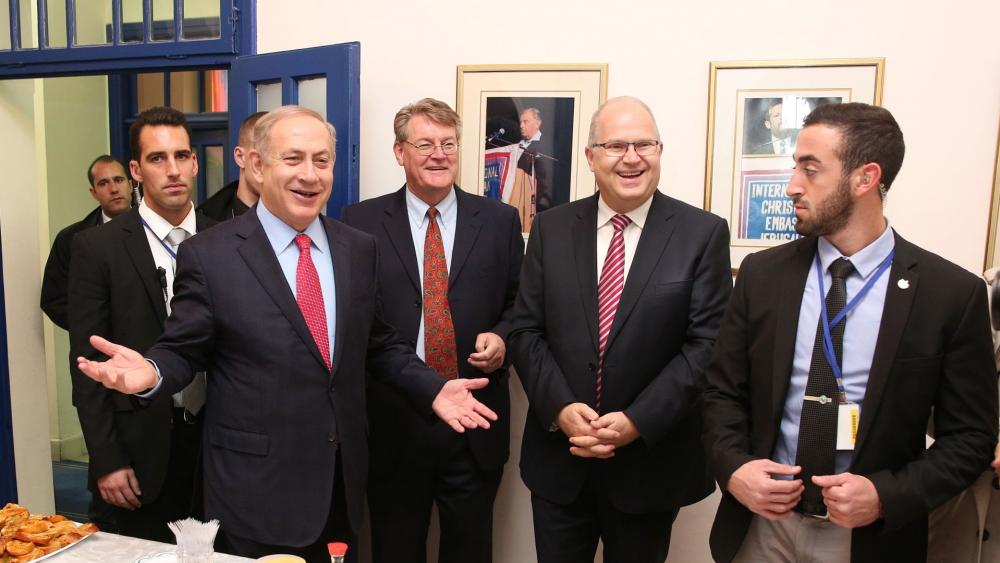 In a video message posted on his YouTube page, Netanyahu said he is "proud" of Israel's relations with its "Christian brothers and sisters."

"I wonder for many of you if you remember the experience you had when you first visited Israel, when you saw the Church of the Holy Sepulcher or the Via Dolorosa or the Sea of Galilee or Nazareth," Netanyahu said.  "I'm sure it moved you deeply."

Netanyahu said Israelis are also deeply moved to have "this bond with you because we all know that this land of Israel is the land of our common heritage. It changed the story of humanity, it changed civilization. What a magnificent heritage it is."

Netanyahu said Israel is standing with persecuted Christians, too.

"We also know that it [the heritage] is under attack these days, that the forces of intolerance, of barbarism that attack all religions attack Christians with particular vehemence," he said. "We stand with you."

Jewish leaders have come out strongly in support of persecuted Christians and urged Western Christians to get involved in helping them.

He ended the message with an invitation.

"So please come to Israel. Come and visit me, I'm waiting for you. It will be a great experience for you. Merry Christmas, Happy New Year."

In a first of its kind event, Netanyahu delivered the greeting from the courtyard of the International Christian Embassy Jerusalem (ICEJ) – a prominent Christian Zionist organization. The holiday greetings are usually filmed in his office.

"Zionism" refers to the return of the Jewish people to the Land of Israel, promised to them in the Bible as an eternal inheritance.

Earlier Netanyahu met with evangelical leaders at a reception for Christmas and Hanukkah at the ICEJ in Jerusalem. There he thanked them for the help of Christian Zionists.

"In fact I don't think Jewish Zionism would have succeeded without the tremendous help of Zionist Christians in the 19th century from many lands, from many lands," Netanyahu said.

Many Christians believe in the biblical mandate to help and encourage Jewish people to return to the Land of Israel.

This year Christmas and Hanukkah coincide.

ICEJ Executive Director Dr. Jürgen Bühler responded by wishing the prime minister a "Happy Hanukkah" and giving him a huge silver Hanukkah dreidel as a gift. A dreidel is a special top that children play with during Hanukkah.

"It was a great honor to host the Prime Minister at our embassy headquarters and to receive his good holiday wishes for Christmas," Bühler said.

"This indeed is a season when both communities can celebrate the triumph of light over darkness. And this timely display of solidarity shows once more that Israel is a country where religious freedoms are not only safeguarded but even encouraged," Bühler said.