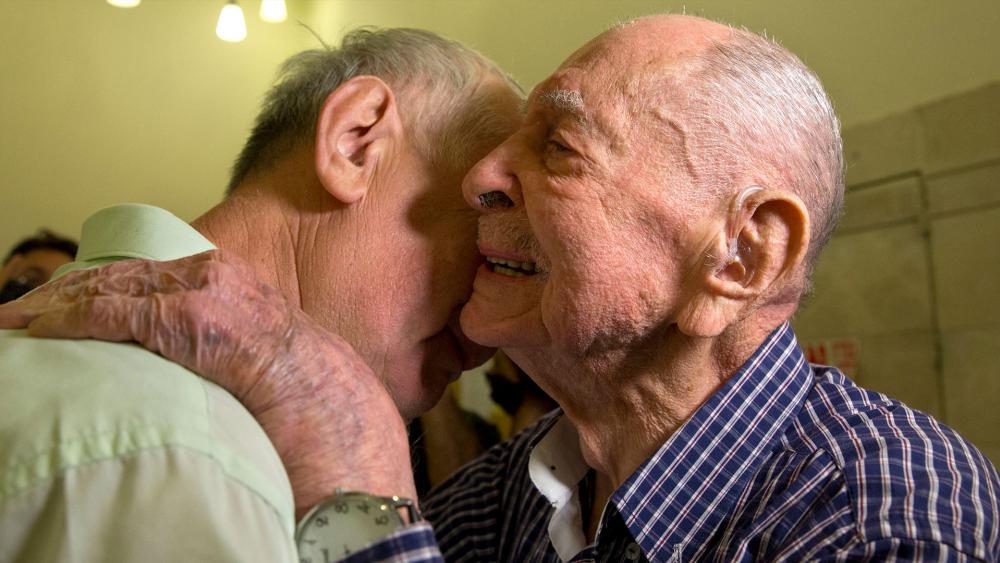 A 102-year-old Holocaust survivor had thought his entire family had been killed during World War II until he met he recently meet his nephew.

Eliahu Pietruszka had fled to the Soviet Union from Warsaw, Poland in 1939 as the war erupted. He was 24 at the time and left behind his parents and twin brothers Volf and Zelig, who were 15.

His parents and Zelig were later deported from the Warsaw Ghetto by Adolph Hiter's SS units and were murdered in a Nazi concentration camp. Somehow Volf managed to escape and stayed in touch with Eliahu before he was sent by the Russians to a Siberian work camp.

Pietruszka assumed his brother had died.

"In my heart, I thought he was no longer alive," he told The Associated Press.

He married in Russia and migrated to Israel in 1949 to start a new family since he thought he had no one left.

Then two weeks ago, Pietruszka's grandson received an email from a cousin working on the family tree.  She informed him she had found a Yad Vashem page of testimony filled out in 2005 by Volf who thought his older brother Eliahu had died. Volf had survived the war and had settled in Magnitogorsk located in the Ural Mountains.

The grandson was able to track down an address for Volf but discovered he had died in 2011.  However, Volf had a son named Alexandre who was still living.  After a brief conversation, Alexandre agreed to come and visit the uncle he never knew about.

When they first met, they hugged each other tightly and began chatting in Russian as they examined each other's faces.

"You are a copy of your father," Pietruszka told his new-found nephew. "I haven't slept in two nights waiting for you."

Throughout his visit, Alexandre tried to hold back his tears, repeatedly shaking his head.

"It's a miracle. I never thought this would happen," Alexandre, himself a retired construction worker, kept saying.

Debbie Berman, a Yad Vashem official at the meeting, said it was incredibly moving to be there for "the end of an era."

"This is one of the last opportunities that we will have to witness something like this. I feel like we are kind of touching a piece of history," she told the AP.

For Pietruszka, a retired microbiologist and great-grandfather of 10, it was a reminder to keep looking.

"I am overjoyed," he said. "This shows it is never too late. People can always find what they are looking for if they try hard enough. I succeeded."