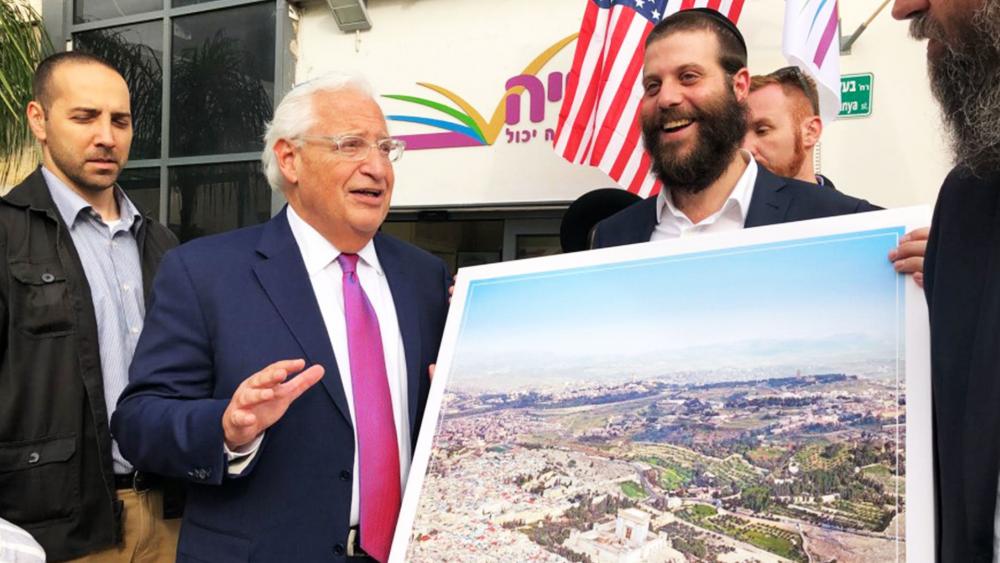 JERUSALEM, Israel – When US Ambassador to Israel David Friedman allowed press photos at the end of a visit to an educational institute in the ultra-Orthodox city of Bnei Brak, he had no idea what was about to happen.

Just as camera shutters began to click, someone from the institute slipped a poster-sized aerial photograph of the Temple Mount beside him in which the Dome of the Rock had been replaced by the Third Temple.

The Achiya Institute, which helps disabled Haredi (ultra-Orthodox) children with learning disabilities, presented the framed photo as a gift to the ambassador.

The US Embassy, which supports the institute, immediately tweeted a statement saying the altered photo in no way reflected US policy nor was Friedman aware of the prank.

It stated, "Ambassador Friedman was not aware of the image thrust in front of him when the photo was taken. He was deeply disappointed that anyone would take advantage of his visit to Bnei Brak to create controversy. ‎The US policy is absolutely clear: we support the status quo on the Haram al-Sharif/Temple Mount."

Jerusalem's Temple Mount is arguably the most contentious piece of property in the world, and Arabs have rioted in the past when even a rumor surfaces that Israel, which has security control of the area, is planning to eliminate the Muslim holy places.

"The management of Achiya wishes to apologize to the American ambassador in Israel, Mr. David Friedman, and to the US Embassy in Israel. An employee from the Achiya organization handed the ambassador a poster that was not approved by Achiya, the embassy, or the ambassador," the statement read.

"We wish to thank Ambassador David Friedman and the embassy staff for the professionalism and generosity they showed in the visit to Achiya to highlight the important work we do to change lives for the better. To our regret, the event was overshadowed by a cheap political act. The employee responsible for that has been identified and has apologized, and we will deal with the issue internally in the organization."

Friedman, for his part, told Israel's Hadashot News he was "mortified" by the incident – one he found "unacceptable."

"I was more mortified than anyone else – than any Palestinian – when I saw a picture of myself next to that poster," he said, according to Israeli media reports. "Somebody just shoved it in front of me and took a picture. Of course this is unacceptable to me – and that the US respects the status quo on Haram al Sharif [the Islamic name for the Temple Mount], it's just an unfortunate thing and I felt terrible that people might have reacted to that the way they did."

And react they did.

Not long after the photo was posted on social media and news websites, the firestorm began, apologies notwithstanding.

Senior officials with the Palestinian Authority seized the moment to demand Friedman's resignation.

"The removal of the holy places to Islam is an idea of Jewish extremists who control the occupation government and the confirmation that the American administration is adopting the racist and inciting ideology of the Jewish extremists.

"We call on Arab countries, Islamic states, international organizations, and the international community to intervene immediately and stop this dangerous precedent before it is too late. The criminal Friedman must apologize and resign from his duties. The US government should close the settlement called the 'Embassy in Jerusalem' and revoke its statements in the matter of Jerusalem."

Saeb Erekat, former chief negotiator for the Palestinian Authority now serving as secretary general of the Palestine Liberation Organization, said, "whoever does this is trying to turn the conflict into a violent conflict on a strictly religious basis."

Others defended Ambassador Friedman and US President Donald Trump.

In an email to CBN News, Mike Evans, founder of the Jerusalem-based Friends of Zion Museum labeled it "fake news."

"An honorable ambassador with moral clarity celebrates a[n] historic achievement of the dedication of the US Embassy in Jerusalem and what does the liberal left media do? Create a story that is completely fake news trying to imply in some way that the ambassador was approving of the Temple Mount reconstruction. Complete nonsense!" Evans wrote.

"Only a lunatic would believe that such a distinguished diplomat like David Friedman would do such a thing," he continued. "So they can't put a bullseye on [US President] Donald Trump and they can't stop what historically has happened so they create a 'food fight' using a picture that [Amb.] David Friedman knew nothing about to imply something that was completely false – how shameful.

"Young Muslims hear such things and feel they are called to jihad, killing innocent people all in the name of Allah and who is responsible for infecting their hearts and minds with such misinformation? Fake news!" he concluded.