A NEW REGIONAL ALLIANCE – Israel, the United States, and Russia 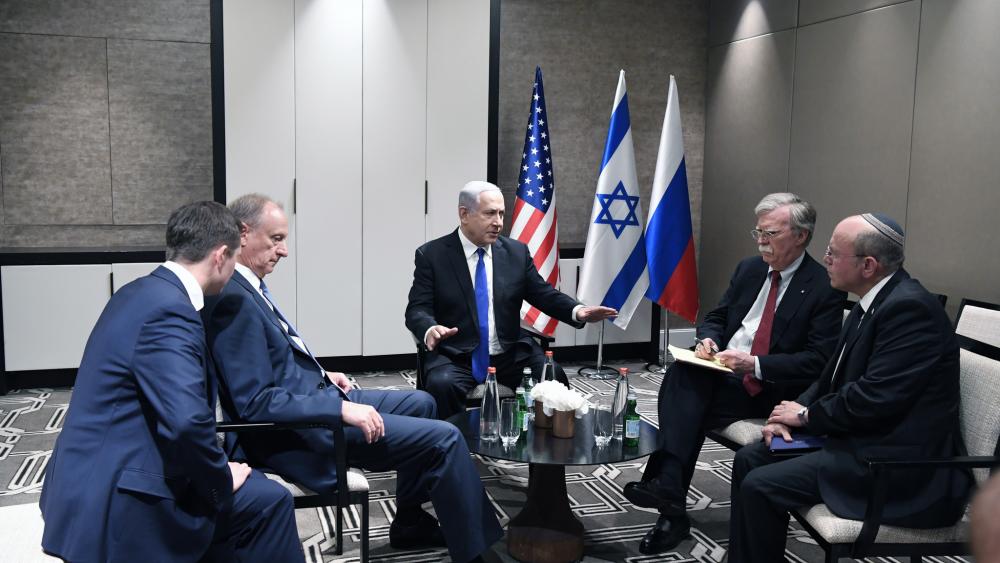 A unique event, unprecedented in Israel’s history, took place in June 2019, when three national security advisors came together – the United States, Russia, and Israel –  in a trilateral meeting in Jerusalem. The stated purpose was to discuss the situation in Syria and its future role in the region. However, the image of Israel bringing together the two highest level superpowers in the world, is of even more significance.

It is the culmination of a pattern of Israeli diplomacy under the leadership of Prime Minister Benjamin Netanyahu, who has succeeded in repositioning Israel internationally. It is his strengthening of ties with Arab nations, Asia, Africa, Latin America, and Mediterranean countries that has resulted in Israel obtaining a firmer position as a global strategic player.

The summit is considered to be one of the most important developments in the past five years, according to Israeli analysts.

Before this trilateral summit began, Israel had already entered into highly successful and intense discussions on the Internet with the leadership of Russia. It reflects on Israel’s capacity to have a very deep and meaningful exchange with Russia.

Yet Russia’s close alliance with Iran is biblically seen by many as eventually leading to a Russian-Persian alliance against Israel in the future. So, while Israel is using Russia, and Russia is using Israel for diplomatic purposes, in terms of achieving regional stability, this is not considered to be a long-lasting alliance.

Furthermore, Israel is already at a disadvantage because of advanced Russian military arms and defense systems positioned in Syria, intended to constrain Israel from taking unilateral actions against Iran in Syria, without advance notice and approval by Russia.

Israel and Russia have successfully maintained a military de-confliction policy until now. But, in the future, when Russian President Vladimir Putin decides it is not advantageous, this will present a real danger to Israel’s Defense Forces. For the time being, Israel cannot expect that Russia will meet its demand to secure the removal of all Iranian military personnel and bases from Syria. However, there is significant progress toward mutual understanding of what both countries can tolerate.

All three nations (Israel, the U.S., and Russia) want to see greater stability in Syria. It is now obvious that stability will have to come under the leadership of Bashar Assad, despite his despicable war crimes against his own people.

One of the reasons that this trilateral meeting took place was to find ways to constrain Iran from its ambitions to use Syria, and the consolidation of all military forces in Lebanon under Hezbollah, to control the region.

Meanwhile, there are key leaders in the Arab world who are looking to the U.S. and Israel for help, in the face of Iran’s recent violent aggression towards the shipping industry in the Persian Gulf.

While the Iranians tried to provoke a conflict with the U.S., President Donald Trump decided not to be dragged into a violent confrontation by the Iranians. Trump showed courage and veracity in his willingness to take military action against Iran, if necessary. Yet he chose instead to apply more crippling U.S. sanctions against Iran. The Iranian regime is under extreme pressure, from within, because U.S. sanctions are increasingly threatening the future of the Iranian economy.

Israel, for its part, has demonstrated its ability to defend itself by taking risky military action against Iranian bases in Syria, as well as against arms transfers meant for Hezbollah. Some of these actions have successfully constrained Iran, and caused Iranian military personnel to pull back from certain areas in Syria that are a threat to Israel.

The Jerusalem trilateral summit also allowed the Americans to use the Russian diplomatic channel in order to clarify to the Iranians where U.S. red lines are, confirming President Trump’s own message to the Iranian regime days before.

Short-term, if Russia takes Iran’s side in its efforts to create regional instability, then the trilateral summit will have achieved very little in terms of real diplomacy. However, if Russia is willing to position itself in a way that is constructive to the current crisis, Russia will have a welcome role among Middle East regional players. Most of those players know that trusting Russia is only a short-term prospect.

From Russia’s point of view, if it causes Iran to stand down from military aggression, it can expect that the U.S. will show greater flexibility regarding sanctions against Russia due to its land grab several years ago of Crimea. The result could be the lifting of constraints on Americans who want to do business with Moscow.

As a result of this trilateral summit Israel is now considered a major strategic player in terms of maintaining the balance of power in the Middle East. According to analysts, the Russian leadership has a very healthy respect for Israel based on experience and knowledge of Israel’s military capabilities and restraint.

The Russians understand that there is, currently, no way to avoid Israel’s position of strength in the region, especially due to the closer ties with Arab Gulf nations. And, Israel’s support is needed by Russia in order to stabilize Syria. Israel had already been involved in that stabilization in an unofficial way, behind the scenes, before this trilateral summit was planned.

Israel would like the Russians to convince Assad to get rid of the Iranians in Syria. But, Israeli leaders are willing to accept a more limited scenario. Netanyahu is demanding very clear limitations of Iranian involvement in Syria, including a halt to Iranian military penetration near Israel’s borders. Israel expects Assad to get rid of Shiite militias sent by Iran.

Also, there is a demand for limitations on how Assad uses his own territory to try to destabilize Jordan, as well as other countries in the region.

Israel will not tolerate an Iranian presence on the Syrian Golan Heights, including several kilometers north of that area. Israel wants to see Putin clearly signal Assad that if he desires to see the reconstruction of Syria, he needs to be much more proactive in stopping Iranian aggression there.

At the same time, the Russians are trying to signal to the Iranians that they will not abandon them, while also behaving as if they are catering to the interests of the U.S. and Israel concerning Syria. This is Russia at its best: promising everybody everything, while emerging as a stronger Middle East powerbroker in the region; at the same time constantly considering its own self-interests in a geopolitical game of chess.

For Israel, it’s all about trying to offer its citizens stability and security in the face of Iranian military advancement on its borders, and in the midst of a difficult destabilizing period in Syria.