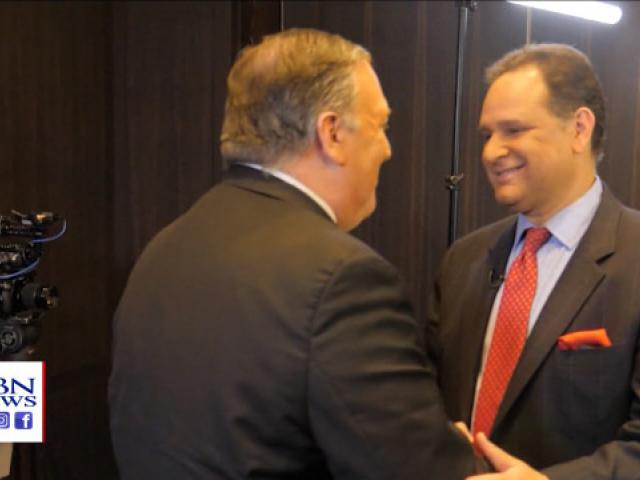 JERUSALEM, Israel - On March 21st, Jews worldwide celebrated the Feast of Purim.  This holiday celebrates how Queen Esther nearly 2500 years ago delivered the Jewish people from the wicked plot of an official of the Persian government named Haman.  He conspired or should we say in this day and age "colluded" and concocted a plot to destroy the Jewish people.  Yet Queen Esther – at the risk of her own life – revealed this plot to the King, "turned the tables" on Haman and saved the Jews.

With this in mind, David Brody and I sat down for an exclusive interview with US Secretary of State Mike Pompeo at the beginning of Purim.  We talked about a number of topics including the impact his visit to the Church of the Holy Sepulcher had on his Christian faith; the geopolitics of the current Middle East and the threats facing the Jewish people just like it was in the days of Queen Esther.

That's when I asked THE question to Secretary Pompeo:

"Today's being Purim, a celebration.  Jews worldwide and here in Jerusalem are talking about the fact that Esther 2,500 years ago saved the Jewish people with God's help from Haman.  And now 2,500 years later there's a new Haman here in the Middle East that wants to eradicate the Jewish people like just like Haman did: the state of Iran.  Could it be that President Trump right now has been sort of raised for such a time as this, just like Queen Esther, to help save the Jewish people from the Iranian menace?"

Secretary Pompeo replied: "As a Christian, I certainly believe that's possible.  It was remarkable – so we were down in the tunnels where we could see 3,000 years ago, and 2,000 years ago – if I have the history just right – to see the remarkable history of the faith in this place and the work that our administration's done to make sure that this democracy in the Middle East, that this Jewish state remains.  I am confident that the Lord is at work here."

Almost immediately the media began to pick up the story.  It went viral.

AP said, "Pompeo says Trump is like the Biblical Queen who Saved Jews." USA Today  and the New York Times ran stories.  CNN broadcast the story along with a sound bite from former State Department John Kirby who called Pompeo's comments "laughable", "embarrassing", "dangerous" and "irresponsible." From CBS to NBC The Hill.com's article had more than 80,000 shares.

Some may question how or even why God could use a man like Trump who they would say is a flawed figure, to say the least.  Yet the Bible is filled with flawed men and women who God used.  When you read it, you'll find President Trump or anyone of us for that matter is in good company.  King David committed both adultery and murder and yet was also a "man after God's own heart."  Moses killed an Egyptian and then went on to lead the Israelites out of Egypt and receive the Ten Commandments and Rahab, a harlot helped the twelve spies capture the city of Jericho.

But you don't have to look to the Bible and Queen Esther to see that history records flawed, imperfect men and women chosen "for such a time as this."

Consider Winston Churchill, called a "drunkard" by some rallied the British people when the menace of Hitler's Nazi Germany stared at them from across the narrow British Channel.  Five years after Hitler's horde swept through Europe and nearly invaded England, the British people celebrated V-E day while Hitler and his thousand-year Reich crumbled.  Churchill it was said, "marshaled the English language and took it into battle."

Remember Ronald Reagan who many disparaged as a "B" movie star stared down the Soviet Union at Berlin's Brandenburg Gate.  He shouted to then-Soviet Premier Gorbachev, "Mr. Gorbachev tear down this wall."  Soon after, the Berlin Wall fell and liberty spread throughout the lands behind the Iron Curtain.  Reagan understood the times, the power of words and confronting "an evil empire."  England's Margaret Thatcher, the "Iron Lady", then Britain's Prime Minister stood shoulder to shoulder with Reagan during those days.

But could God be at work through these men and women at critical times in history?  Ben Franklin thought so.

During the crisis at the Constitution Convention in 1787 when America was suffering its birth pangs, Franklin stirred his fellow delegates with a speech that still resonates today.  After facing daunting challenges to come into one political accord, he appealed for daily prayer during their deliberations to invoke God's help.  He said, "I have lived, Sir, a long time, and the longer I live, the more convincing proofs I see of this truth—that God governs in the affairs of men. And if a sparrow cannot fall to the ground without his notice, is it probable that an empire can rise without his aid?"

These men and many women throughout history played pivotal roles when the times demanded it.  Could it be "possible" then that a US President with the prestige and power of the greatest nation on earth might be used to stand behind the only Jewish State at this time in history?  If Benjamin Franklin said "God governs in the affairs of men" is Secretary of State Pompeo's statement that it's "possible" God is using President Trump "for such a time as this" as He did with Queen Esther either "laughable" or "dangerous?"

The circumstances look like reflections in a two and a half millennia old mirror.

Twenty-five hundred years ago, Haman prodded Persia's King to issue a decree that would eliminate the Jews.  Yet Queen Esther stood in the way of the existential threat.  Today, Iran bellows nearly daily threats to "destroy the Zionist entity" or "wipe them off the map."  Since taking office, President Trump pulled out of a disastrous Iranian nuclear deal; re-imposed sanctions on the Islamic Republic and used his global bully pulpit to ostracize this regime dedicated to global hegemony.  Likely Winston Churchill, Ronald Reagan or Benjamin Franklin would have understood that confronting rather than appeasing enemies like Hitler, the Soviet Union, the British Empire or the Islamic Republic of Iran works.

But the comparison between a US President and a Biblical figure has happened before.  Consider this account by Craig von Buseck in his article, "I Am Cyrus: Harry Truman's Key Role in the Rebirth of Israel."

Eleven minutes after Israel became a nation at midnight on May 15, 1948, President Harry S. Truman directed the United States to become the first nation to recognize the new Jewish State. Harry Truman did what he thought was right—and as a result, played a part in seeing biblical prophecy fulfilled.

The following year, Israel's Chief Rabbi, Isaac Halevi Herzog, met with the president in the White House and told Truman, "he had been given the task once fulfilled by the mighty king of Persia, and that he too, like Cyrus, would occupy a place of honor in the annals of the Jewish people."

Soon after leaving the White House in 1953, Truman was invited to speak at the Hebrew Theological Seminary in NYC. When he was introduced by his friend, Eddie Jacobson, as the leader who helped create the State of Israel, Truman snapped, "What do you mean ‘helped create'? I am Cyrus!"

When you look at the world through the eyes of Ben Franklin or the Bible, you just might see God at work in all sorts of place, from the high and mighty to the obscure and anonymous.  More than seventy years later, maybe it is possible that a man who sits in the most powerful office in the world might have been called to stand beside the Jewish people and with the Jewish State like Queen Esther "for such a time as this." 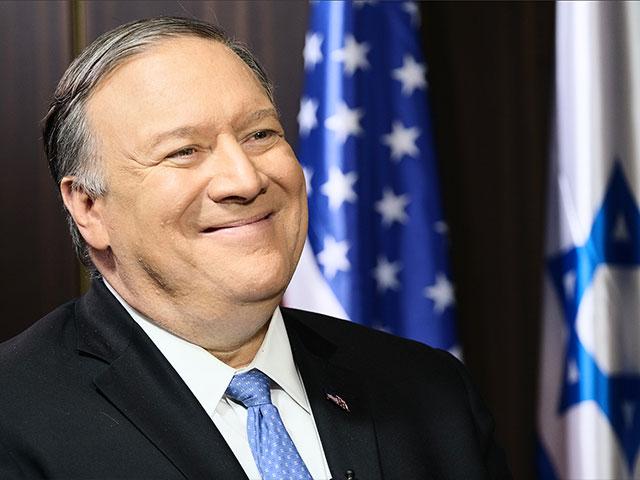 EXCLUSIVE Secretary of State Pompeo to CBN News: God May Have Raised Up Trump Like He Raised Up Queen Esther
CBN News Email Updates