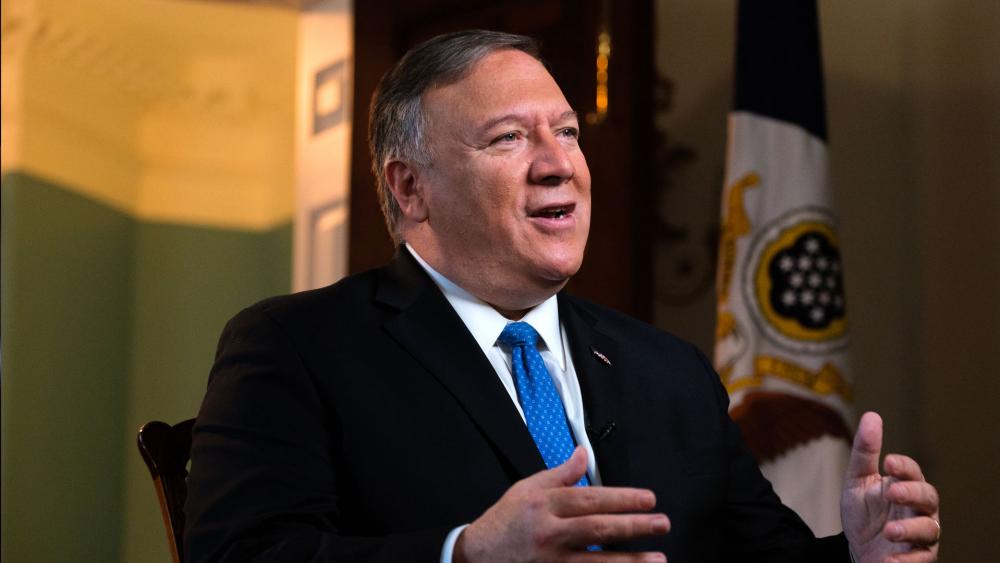 US Secretary of State Mike Pompeo (Photo: Patrick Robertson/CBN News)
6105651666001
Trump Admin Stands Against the World to Support Israeli Settlements - Jews Are 'the People of Judea'

The US is reversing course on a major policy position on Israel.

In a surprise announcement on Monday, Secretary of State Mike Pompeo said the US is softening its position on the Israelis settlement in the so-called West Bank - the region known in the Bible as Judea and Samaria.

Speaking from the State Department in Washington, Pompeo repudiated a 1978 State Department legal opinion that held that civilian settlements in the so-called occupied territories are "inconsistent with international law."

The Trump administration views the opinion, the basis for long-standing US opposition to expanding the settlements, as a distraction and believes any legal questions about the issue should be addressed by Israeli courts, Pompeo said.

"Calling the establishment of civilian settlements inconsistent with international law has not advanced the cause of peace," Pompeo said. "The hard truth is that there will never be a judicial resolution to the conflict, and arguments about who is right and who is wrong as a matter of international law will not bring peace."

Pompeo said the US would not take a position on the legality of specific settlements, that the new policy would not extend beyond the West Bank and that it would not create a precedent for other territorial disputes, he said.

He also said the decision did not mean the administration was prejudging the status of the West Bank in any eventual Israeli-Palestinian peace agreement.

Palestinian President Mahmoud Abbas' spokesman, Nabil Abu Rdeneh, condemned Pompeo's announcement and said settlements are illegal under International law. "The US administration has lost its credibility to play any future role in the peace process," he said.

Even though the decision is largely symbolic, it could help Israeli Prime Minister Benjamin Netanyahu, who is fighting for his political survival after he was unable to form a coalition government following recent elections.

In a prepared statement, Netanyahu said the US has adopted an important policy that rights a historical wrong when the Trump administration clearly rejected the false claim that Israeli settlements in Judea and Samaria are inherently illegal under international law.

"This policy reflects a historical truth - that the Jewish people are not foreign colonialists in Judea and Samaria. In fact, we are called Jews because we are the people of Judea," the statement said.

"The Trump Administration policy is also correct in stating that those who have categorically denied any legal basis for the settlements not only deny truth, history and the reality on the ground, they also set back the cause of peace, which can only be achieved through direct negotiations between the parties," the statement read.

"Israel's legal system, which has proven itself fully capable of addressing legal questions related to the settlements, is the appropriate place for these matters to be adjudicated - not biased international forums that pay no attention to history or facts," the statement continued.

That's partly a reference to the UN which the Obama administration had allowed to condemn Israel's settlements.

Netanyahu said his country remains ready and willing to conduct peace negotiations with the Palestinians in an effort to achieve a durable peace but will continue to reject all arguments regarding the illegality of the settlements.

"Israel is deeply grateful to President Trump, Secretary Pompeo and the entire US administration for their steadfast position supporting truth and justice, and calls upon all responsible countries who hope to advance peace to adopt a similar position," the statement concluded.

Netanyahu's political rival Benny Gantz also approved of Pompeo's announcement calling it an "important statement, once again demonstrating its firm stance with Israel and its commitment to the security and future of the entire Middle East."

Democrat presidential candidate Bernie Sanders tweeted his opposition saying, "Israeli settlements in occupied territory are illegal. This is clear from international law and multiple United Nations resolutions. Once again, Mr. Trump is isolating the United States and undermining diplomacy by pandering to his extremist base."

Dr. Jack Graham, the pastor of Prestonwood Baptist Church in Plano, Texas, said the decision on the West Bank settlements demonstrates the US "still has the courage to stand with Israel."

“The Trump administration once again has demonstrated why evangelical Christians have been unwavering in their support for the administration’s domestic and foreign policy agendas," Graham said in a statement. "No foreign policy issue matters more to evangelicals than America’s stance on the state of Israel and its right to exist in its ancestral land. This decision not only strengthens America’s relationship with our most important ally in the Middle East (and, perhaps, the world). It demonstrates to the rest of the world that America still has the courage to stand with Israel.”

After Pompeo made the announcement, the US Embassy in Jerusalem released a security alert for all US citizens considering travel to or through Jerusalem, the West Bank, or Gaza. The alert reminded US citizens to carefully consider risks to their personal safety and security at sites and events that are potential targets.

Israel recaptured the West Bank and East Jerusalem after its Muslim neighbors tried to annihilate the Jewish state during the 1967 Mideast war known as the Six-Day War.  Today, 700,000 Israelis live in the two areas, which are also claimed by the Palestinians.