A Revolution of Hunger and Blood: Iraqi Police Shoot Civilians as Hundreds Protest for Better Life 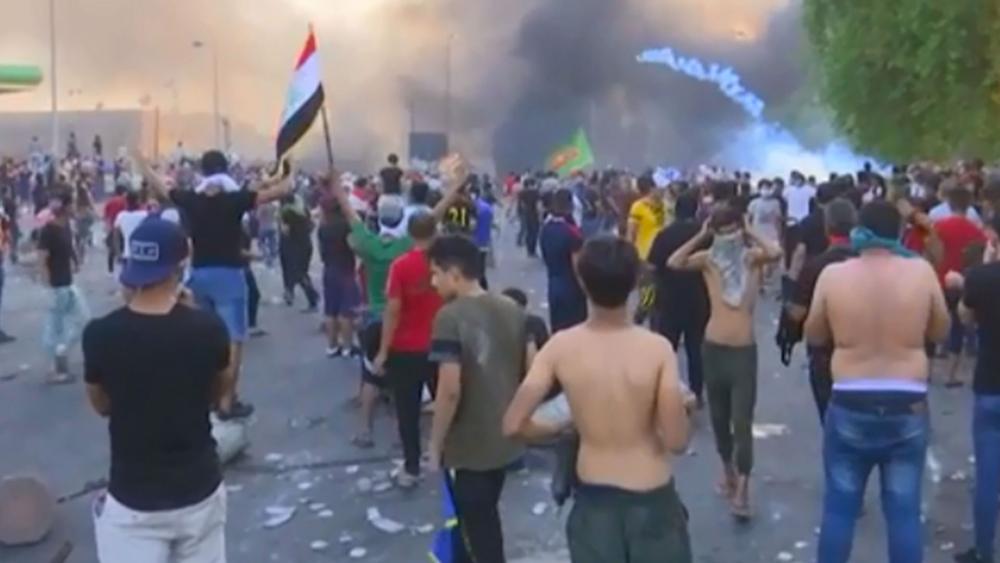 JERUSALEM, Israel  –  At least 33 people are reported dead and hundreds injured during violent clashes between Iraqi security forces and anti-government protesters who are crying out against corruption and the nation's crumbling economy.

Since Tuesday, spontaneous anti-government protests have erupted in Baghdad in response to skyrocketing unemployment, failing public services, and far-reaching government corruption. The protests lack a clear political leader but they are the largest since Adel Abdul-Mahdi became prime minister a year ago.

Iraqi leaders ordered an indefinite around-the-clock curfew on Baghdad Thursday to stop all movement across the capital except for ambulances, religious pilgrims, and travel from the airport.

Abdul-Mahdi told the nation in a televised address Friday morning that the curfew is like a "bitter medicine" that needs to be swallowed and urged demonstrators to stay home. The premier said the protesters' demands were "legitimate" but there is "no magic solution" to Iraq's problems. However, he vaguely promised to fight corruption and to craft laws guaranteeing poor families a basic income.

The curfew has not stopped hundreds of protestors from spilling out into the streets only to be met by live fire and tear gas from security forces.

"Despite the curfew, we are going out to protest, to demand our rights. We want to change the regime," one protester told Reuters news agency.

"They have arrested our people. They have done things to our people they did not even do to Daesh  [ISIS]. They have beaten them up and humiliated them while firing live gunfire," he added. "What did we do? Are we suicide bombers?"

The protests were organized on social media but authorities on Wednesday shut down internet access and messaging apps across much of Iraq. Still, the demonstrations are spreading to the predominately Shiite areas of the country's south and present the first serious challenge to Abdul-Mahdi's rule since he came to power.

#Iraq : the streets of #Baghdad tonight.

The government shutdown of the internet is not preventing the Iraqi people from going out pic.twitter.com/t3RJWTiGxm

Hospitals are filling up with hundreds of people injured by Iraqi security officials who have orders to open fire on civilians. The US State Department has decided to pull its non-essential employees because of the unrest.

"A woman was shot in the head, a child, and the husband in his chest. A protestor got shot in his head. I really don't know how to describe it," one demonstrator named Abu Ghazal Al-Alawi, 30, told the Middle East Center for Reporting and Analysis.  "It's a genocide here, people are dead in the street, they are chased from lanes to lanes, from streets to streets."

"Last night, there [was] a vehicle moving on Aljmhourai  [Jamhuriya]  Bridge there were about three vehicles, it was an ambulance for federal police so it was an ambulance but it should hold the Red Cross on the car. These cars went inside Al Tahrir square driving fast toward the people inside the square. This reveals that they used ambulances to hit people."

While some analysts expect the protests to die down, Al-Alawi says there will be more violence on Friday as armed protestors clash with security forces.

CRAZY: Iraqi security forces shoot on anti-government protesters. They make use of heavy gunfire in #Baghdad.

"I believe until tomorrow it will be an armed struggle, you can quote on me today on that," Al-Alawi said Thursday evening. "It will be with Molotov  [firebombs]  tomorrow it will be [an] armed struggle. Today, Thursday was named 'Sacrifice Thursday (Khamis Al-Shahada),' tomorrow will be a 'Friday of victory (Jumeat Alaintisar)'. After the prayers of Friday, tomorrow (October 4) people will hold their guns and will [take] revenge [on] their beloved ones they lost. They will revenge against those who killed demonstrators."

Iraqi Christians Fear for Their Lives

ISIS destroyed much of the Assyrian homeland and committed a genocide against them when the terror group emerged in 2014. For years, these Christians have been asking for autonomy in the Nineveh Plains where they can be free and safe from another genocide.

"The Assyrians are nervous (and are) carefully and cautiously watching the situation," Juliana Taimoorazy, Advocacy Fellow of the Philos Project and Founder of the Iraqi Christian Relief Council told CBN News. "This is their country after all. This is their ancestral homeland as well so they are concerned about their own well-being and of course, the well-being of the whole country. They too suffer like the rest of the Iraqis from corruption in the government, lack of real leadership and basic living standards. They have come under severe attack starting in 2003 for their faith and their ethnicity and they suffer alongside their Arab brethren and other minorities inside Iraq."

Assyrian Christians hope this new Iraqi revolution will open the door for them to have religious freedom, autonomy in their homeland, and a seat at the negotiating table as Iraqis begin discussing the future of their country.

"They hope that out of this chaos the people of Iraq will be able to prevail and a real solution will also be presented for the Assyrians of Iraq in terms of having autonomy within the Iraqi border and not a separate state, per se. They would like to have autonomy in their own region in the Ninevah Plain and be equally treated with religious freedom, freedom of speech, without fear," said Taimoorazy.

The Christians, like most Iraqis, are terrified of Iran's creeping influence in the country.  Iraq is allied with both the US and Iran and hosts thousands of US troops, as well as powerful Iranian-backed militias.

"The military which has been beating the people have been speaking Arabic with a Persian accent and most importantly, the Iranian militia dressed in Iraqi army uniform have also started beating the Iraqi military and injuring them," said Taimoorazy.

She also said Iranian militias have "forcefully moved in Christian homes and (evicted) Christians in Baghdad."

"Iraqi Christians hope that Iranian tentacles will be cut out of Iraq through this protest," Taimoorazy explained.

Experts say Iraq is not ready for a regime change because the country could fall into Iran's hands. That would spell trouble for Israel and the rest of the region.

"The officials I met with told me yesterday that the current regime is the best option for now. If the regime falls, most likely it will be [in the] complete and absolute control of Iran," said Taimoorazy.

She explained that many Iraqis are calling on President Donald Trump to eliminate Iran from their country.

"Everyone in the region says if anyone can do this [it] is Trump," said Taimoorazy.

While Iraqis are petitioning the US to intervene, the US is calling on all sides to stop the violence  –  but it does not seem like the bloodshed will stop any time soon.

"This is a revolution of the hungry," said Al-Alawi. "No one is holy, no individual and politician is holy anymore. Today Iraq is unholy. Today, Iraq is given over to whoever wants it. It will come by the blood of Iraq's sons."