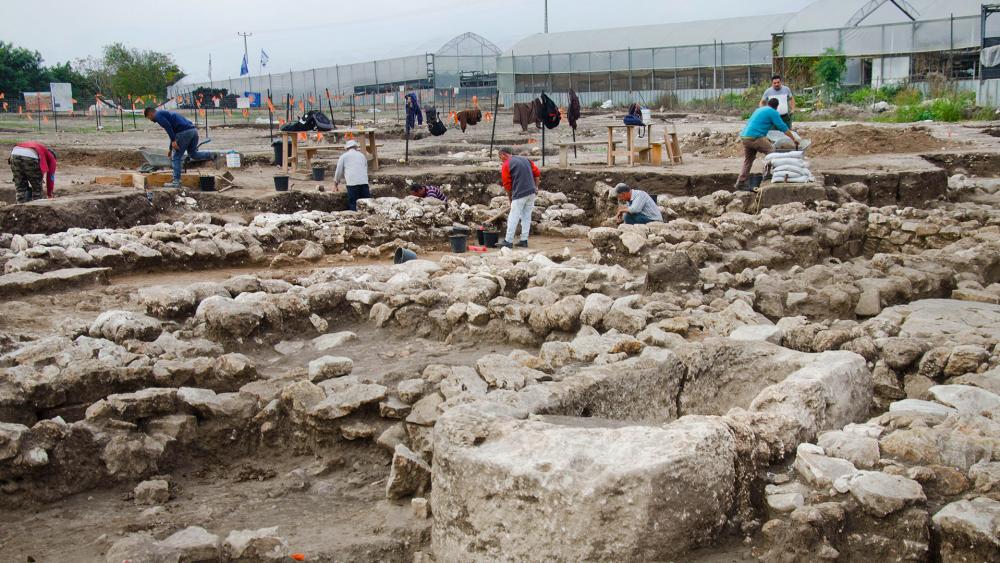 The massive city was uncovered during excavations funded by the Netivei Israel Company that have been in progress for two and a half years. Experts say it is one of the first and largest cities of the ancient Near East.

Thousands of teens and student volunteers uncovered the settlement, which spans over 650 dunams (160.6 acres) and would have accommodated around 6,000 inhabitants.

"There is no doubt that this site dramatically changes what we know about the character of the period and the beginning of urbanization in Israel," said Itai Elad, Dr. Yitzhak Paz and Dr. Dina Shalem, directors of the excavation on behalf of the Israel Antiquities Authority.

The city, which operated at the end of the 4th millennium BC, was surrounded by a fortification wall, with streets, alleys, and residential and public areas.

Archaeologists discovered a temple in the public areas of the city, pointing to the spiritual life of the inhabitants.

The temple had a courtyard and a large stone basin used during religious rituals. Researchers also found burnt animal bones - evidence of animal sacrifices. They also found rare figurines in the temple facility.

The directors of the excavation said the city is evidence of how the inhabitants of Canaan were consolidating their identity in newly established urban sites.

"Such a city could not develop without having behind it a guiding hand and an administrative mechanism. It's impressive planning, the tools brought to Israel from Egypt found at the site, and its seal impressions are proof of this. This is a huge city – a megalopolis in relation to the Early Bronze Age, where thousands of inhabitants, who made their living from agriculture, lived and traded with different regions and even with different cultures and kingdoms in the area," said Elad, Dr. Paz, and Dr. Shalem.

Excavators also uncovered an even earlier site dating back to the Chalcolithic period from 7,000 years ago underneath the city's homes.

The volunteers who uncovered the site were a part of the Israeli Antiquities Authorities Sharing Heritage Project, which aims to connect participants with the history and culture of the land.

"The challenges the archaeological excavation presented the students, and the uncovering of its findings, contributed both to their personal development and enriched their acquaintance with the country's landscape, its sites, and history," said Noah Shaul, a guide on behalf of the Israel Antiquities Authority.

Now that the site has been uncovered, officials are working to protect and preserve its remains.