US Evangelicals Visit Saudi Arabia on Eve of 9/11 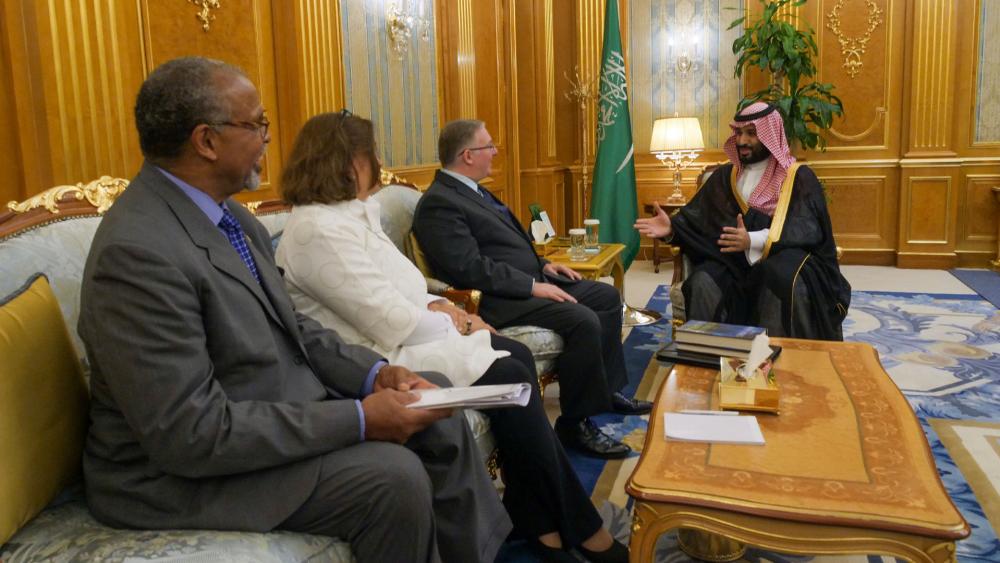 JEDDAH, Saudi Arabia - A high profile group of US Christian leaders visited Saudi Arabia on the eve of 9/11.  During their visit, the delegation issued a statement including why their visit coincided with the 9/11 tragedy.

“While it may surprise some that we would choose the week of ‪September 11 to visit the Kingdom, we actually feel there is no more appropriate time to focus on where the Kingdom must go, can go, and where we believe it is going. In fact, our visit here on this profoundly important week is in defiance of those that aim to derail reform in the Kingdom through an embrace of hate and fear rather than courage and moderation.”

The delegation of prominent Evangelical leaders met with Saudi Arabian Crown Prince Mohammed Bin Salman Tuesday in the Red Sea port of Jeddah.  This is the second visit by the evangelical delegation to meet with the Crown Prince within a year.  New York Times bestselling author Joel Rosenberg led the delegation that included Rev. Johnnie Moore, a co-chairman of President Donald Trump's Evangelical Advisory Council; Larry Ross, longtime spokesman for Billy Graham; Ambassador Ken Blackwell who served as US Ambassador to the UN Human Rights Council; Michael Little, former president of CBN; Pastor Skip Heitzeg, senior pastor of Calvary Albuquerque with more than 15,000 in attendance; and Wayne Pederson, a member of the board of directors of the National Religious Broadcasters.

Rosenberg said the group discussed a wide range of issues with the Crown Prince including societal reforms Bin Salman is implementing. They include its battle against terrorism; steps toward religious freedom and human rights, taking on Iran while making inroads toward a relationship with Israel and the peace process and the upcoming peace plan by the Trump Administration.  A number of the delegation members told CBN News they were surprised at the transformation they witnessed in the country reflected in their joint statement:

“Frankly, we’re delighted at the scope of the developments even as we look with expectation for more change. We are also patient friends with realistic expectations that it will take time to reform what took years to create.”

The first visit of the delegation took place in November 2018 just weeks after the firestorm of the murder of Saudi journalist Jamal Khashoggi.  While the Crown Prince denies any involvement in the killing, he continues to face strong criticism by Congressional leaders on Capitol Hill.

Joel C. Rosenberg addressed what he calls a lack of Congressional involvement with Saudi Arabia:

“We were encouraged to see that two US Senators visited the Kingdom this week and met with the Crown Prince. But we were stunned to learn that these were the only two Senators who have come to visit all year. Saudi Arabia is one of America’s most important strategic allies in the war against radical Islamist terrorism and in countering the rising Iranian threat. Yes, there are significant challenges in the US-Saudi relationship. But we urge more Senators to come here, see the sweeping and positive reforms that the Crown Prince is making, and ask him candid questions directly rather than sniping at him from Washington.”

The delegation also met with US Ambassador John Abizaid, Saudi Arabia’s ambassador to Yemen, and Sheikh Mohammed al-Issa who is Secretary of the Muslim World League. They also flew to the ancient Nabatean city of Al-Ula for a tour and received a briefing from Eitidal, Saudi Arabia’s center for countering extremist ideology.