After 4 Mideast Peace Deals, Netanyahu Thanks Trump, Honors Kushner Ahead of Morocco Trip 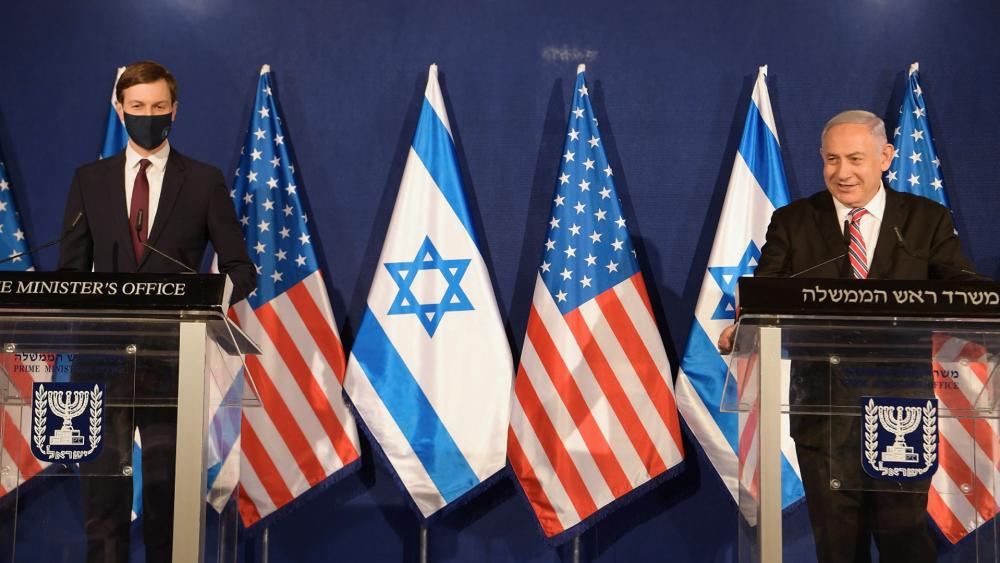 JERUSALEM - In speeches that thanked President Trump and his team, Israeli Prime Minister Benjamin Netanyahu honored Senior Trump Advisor Jared Kushner as they met in Jerusalem ahead of a joint Israeli-American delegation set to leave for Morocco on Tuesday.

"This is a groundbreaking visit that will speed up the normalization of relations between Israel and Morocco," Netanyahu said.

Morocco is the fourth country to join the Abraham Accords - initiated by President Trump - after the UAE, Bahrain and Sudan.

"Over the years I've met countless individuals from different countries who have tried to advance peace in the Middle East," Netanyahu said. "They all espoused noble values, noble intentions, they all thought to leave their mark, but few, I think none actually, had greater success than you Jared."

Netanyahu noted that Trump's Abraham initiative had led to four peace agreements in a few months and said there would be more to come.

"In doing all this, Jared, you've successfully reinforced American leadership in the Middle East and in Middle East peacemaking. I think you've greatly enhanced American standing in the region" Netanyahu said.

"You also had a pivotal role in President Trump's peace plan. It's the only realistic peace plan that has been presented so far that addresses Israel's fundamental national security interests and other interests," he added.

Netanyahu presented Kushner with a plaque recognizing him for "his historic contribution to the Abraham Accords, the normalization of Israel's relations with the Arab and Muslim world, and to peace in the Middle East."

"By doing things differently, we created new opportunities, and then we seized those opportunities when they presented themselves," Kushner said.

"Working with you, President Trump was willing to take the risks that others were not willing to take, to pursue opportunities that others thought were too hard, and then also to spend time and political capital that many thought he should not spend," Kushner said.

"Our collective efforts have led to the birth of the new Middle East, where firsts and breakthroughs are now happening almost every day," Kushner added.

On Tuesday, Kushner and the delegation will fly on the first Israeli El Al, direct commercial flight to Morocco.

Kushner said he hoped the agreement would help countries to move forward instead of being held back by "stale thinking and old conflicts."

"Scapegoating, anti-Semitism, and isolating Israel have led to destructive behavior that has held the world back for far too long," Kushner said.

Earlier, Netanyahu and Kushner planted 18 trees in the Grove of Nations in the Jerusalem Forest that was named the "Kushner Garden of Peace."

"The numerical value of the Hebrew letters for eighteen is chai, which means life, and the olive branch is a traditional symbol of life and peace," Netanyahu explained.

"It is fitting that we choose to honor Jared Kushner in this way. Jared, you've played a critical role in the inception and in the implementation of the Abraham Accords. These accords have shown the world, and the entire Middle East of course, how to shed hostility and conflict and how to embrace the path of life and peace," he added.