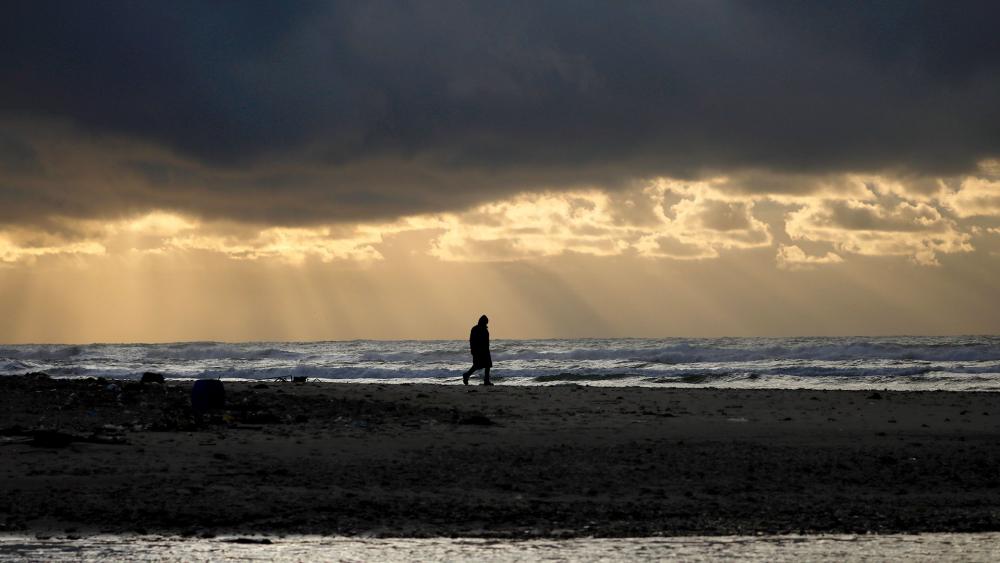 AP/A person walks on the beach as heavy clouds gather over the Mediterranean Sea and the Alexander River, in Hefer Valley, Israel, Thursday, Jan. 9, 2020.

The country has seen more rain in the first 10 days of January than it usually gets in the entire month.

The rain is bittersweet for Israelis because although the shrinking Sea of Galilee has risen approximately nine inches in 24 hours as of Thursday morning, the torrential downpour has destroyed property, triggered flash flooding, and stolen lives throughout Israel.

Children in Emunim, a moshav in Israel’s central region, were rescued from their school with tractors after all access to the site was completely submerged in water. Meanwhile, the rain has forced schools throughout northern Israel to close.

The flooding has blocked roads and closed off several highways. The Israel Nature and Parks Authority has also closed several river trails out of fear that the waterways will overflow and endanger the lives of hikers.

Israel’s Channel 12 reported that it will cost hundreds of millions of shekels to repair the building damage in the northern city of Nahariya alone.

Meanwhile, others are mourning family members who have died as a result of rampant flooding.

On Thursday, approximately 1,000 people attended the funeral of a man named Motti Ben Shabbat, who drowned while trying to save people trapped in an overturned car in Nahariya. Police said the passengers survived but Ben Shabbat was carried away by rampant floodwaters.

He is the seventh person to die from the heavy rain.

On Saturday, a young couple died while trapped in a flooded elevator in Tel Aviv. It took 30 to 60 minutes for emergency services to arrive despite multiple calls to police. Officials say the elevator likely stopped due to a power outage.

Prime Minister Benjamin Netanyahu ordered an investigation into the incident.

“This disaster tore all of our hearts. I do not think that there is anyone who can remain indifferent to these tragic deaths. The matter is currently being investigated and checked. It is too early to give conclusions. When the inquiries are finished, they will be published,” he said.

Netanyahu on Thursday also met with advisors on how to help citizens during the severe weather.

“I just held an exhaustive discussion about the problems of the moment with the Public Security Minister, Israel Police Acting Commissioner and the heads of the emergency organizations. We are making the State of Israel more efficient and sophisticated in using technology and databases in order to deal with these natural disasters. This disaster, the recent rains have exacted the very heavy and tragic price of seven lives. I would like to send condolences on behalf of all citizens of Israel to the families, including the family of Motti Ben-Shabbat, a hero,” Netanyahu said.

He also urged citizens to listen to heed safety instructions and avoid going to dangerous areas.

“MDA increased its staffing of EMTs and paramedics, and added 4×4 vehicles to the fleet in effort to provide a rapid response to all incidents, and provide the best possible medical care to those in need. MDA’s EMTs and paramedics continue to be on high alert, and are prepared to save lives and provide treatment in all weather conditions,” said Magen David Adom director general Eli Bin.