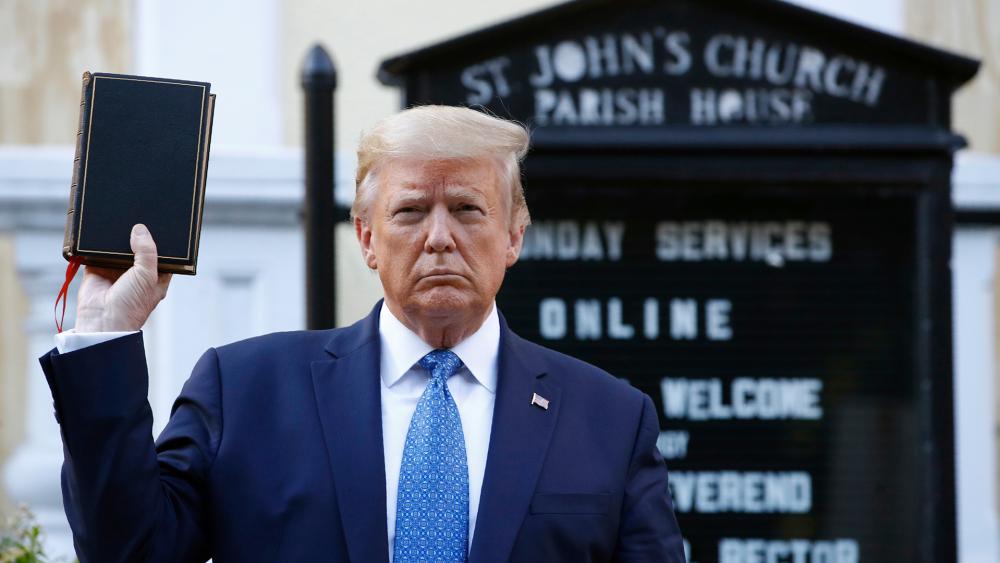 President Donald Trump visited Washington, DC's St. John's Episcopal Church near the White House Monday after it was set on fire during overnight protests over the death of George Floyd.

Trump stood in front of the church, raised a black Bible, and said: "We have a great country. Greatest country in the world."

The president's visit came after he said during a press conference at the White House that he would "pay my respects to a very very special place."

We have the greatest country in the world—and we will keep America safe. pic.twitter.com/lqHaUZ4wxW

The Associated Press reported that law enforcement cleared the area of peaceful protesters with tear gas around 6:30 p.m. before the president's visit.

Trump's decision to visit the damaged 200-year-old church located steps away from the White House drew mixed reactions, with critics calling it a photo-op.

"The president did not pray when he came to St. John's, nor … did he acknowledge the agony of our country right now, and in particular, the people of color in our nation who wonder if anyone in public power will ever acknowledge their sacred work, and who are rightfully demanding an end to 400 years of systemic racism and white supremacy in our country," Budde told CNN.

"They knew the street needed to be cleared before 7 pm curfew. But they deliberately stayed to trigger police action  [and]  get the story they wanted, that 'police attacked peaceful protestors'," he tweeted.

"Thank you, President Trump. God and His Word are the only hope for our nation," he said on Facebook.

Protests have swept across the country since a video of a white police officer kneeling on the neck of a handcuffed Floyd went viral.

Derek Chauvin, the Minneapolis police officer in the video, was on Floyd's neck for nearly nine minutes as he repeatedly said "I can't breathe."

Floyd was pronounced dead soon after being taken to a hospital.

Trump called the video "horrible" and Chauvin was charged with murder.

An independent autopsy determined Floyd's death to be a homicide. The cause of death was defined as "cardiopulmonary arrest complicating law enforcement subdual, restraint, and neck compression."

The medical examiner's office also found evidence of heart disease, fentanyl intoxication, and methamphetamine abuse, but the examiner did not cite them as contributing to Floyd's death.