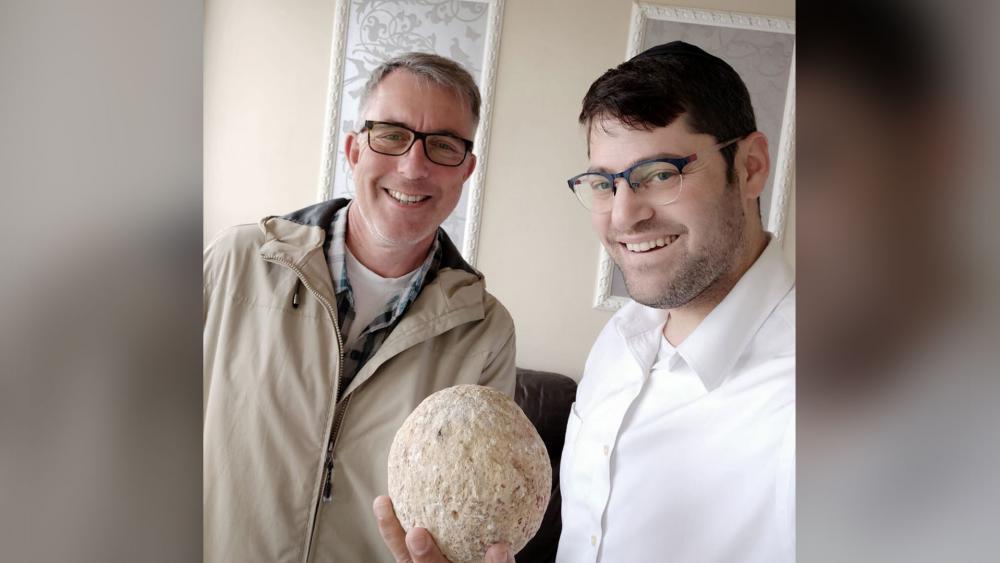 JERUSALEM, Israel – An anonymous thief who stole a 2,000-year-old artifact more than a decade ago has returned it to its home at the Jerusalem Walls National Park in the City of David.

The artifact is a ballista stone (catapult bolt) that he stole from the park 15-years-ago. The man had a change of heart after watching the deadly coronavirus outbreak spread throughout the world and felt like it was time to right his wrongs because “the end of the world is near.”

Moshe Manies, who took it upon himself to be the go-between for his anonymous thief and the State Treasury, returned the stone this weekend without revealing the man’s identity.

“It involved two ‘shababniks’ (rebellious youth), who, 15 years earlier, toured at the City of David site and came across a display of ballista stones, which were catapulted at fortifications”, explained Manies.

“One of the boys took one of the stones home. Meanwhile, he married and raised a family, and told me that for the past 15 years the stone is weighing heavily on his heart. And now, when he came across it while cleaning for Passover, together with the apocalyptic feeling the Coronavirus generated, he felt the time was ripe to clear his conscience, and he asked me to help him return it to the Israel Antiquities Authority.”

Pictured: Moshe Manies and Uzi Rotstein of the Israel Antiquities Authority with the ballista stone.

Uzi Rotstein, Inspector at the Antiquities Robbery Prevention Unit at the Israel Antiquities Authority, thanked the anonymous man for returning what he stole.

“We commend the return of the artifact and appeal to anyone who has taken an archaeological artifact, to take a weight off their heart and return it to the State Treasury. These artifacts, which are thousands of years old, are our national treasure. They tell the story of The Land and of who resided here before us, and should be documented and displayed,” said Rotstein.

Dr. Yuval Baruch, Jerusalem Region Archaeologist at the Israel Antiquities Authority, said the ballista stones found in the City of David are probably the remnants from the Roman destruction of Jerusalem in 70 AD.

He said they “were ancient weapons, which were used to hurl stones like the one returned at the top of the fortress walls in order to distance the protectors of the city, who stood at the top.”

Pictured: Illustration of the ballista machine. Credit: Shalom Kveller, courtesy of the City of David Archives

“Additional stones of this type have been uncovered in Jerusalem, at, among other places, the area of the Russian Compound near the estimated path of the Third Wall, which was the external wall of Jerusalem during the time of the Second Temple. In the excavations of the Israel Antiquities Authority there, a battlefield was uncovered, with tens of ballista stones scattered on the ground,” Baruch explained.