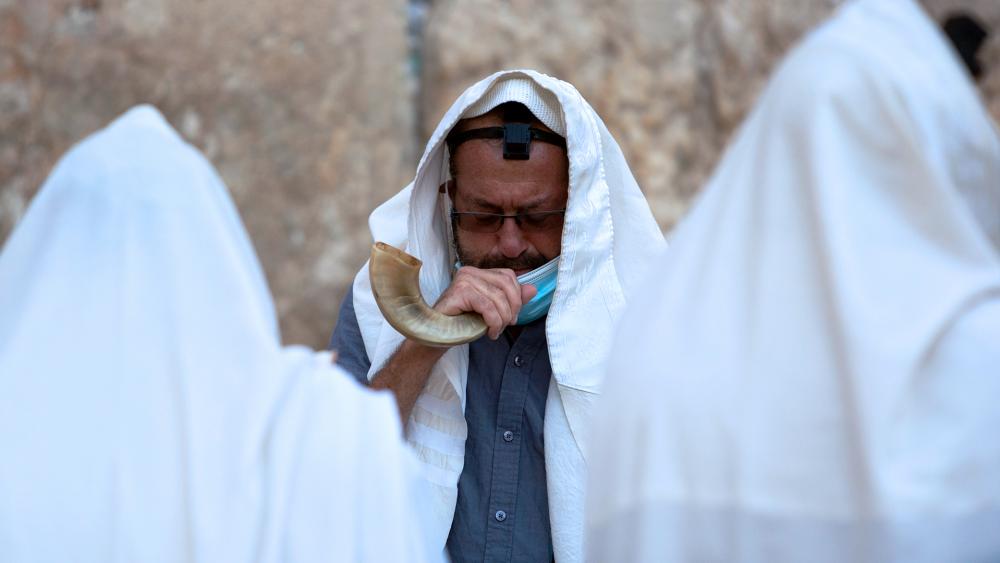 An ultra-Orthodox Jewish man blows a shofar, a musical instrument made from an animal horn, as he prays ahead of the Jewish new year at the Western Wall.(AP Photo/Sebastian Scheiner)
6192287832001
Israelis Brace for a Holiday Season Like No Other as Country Enters Second Lockdown

JERUSALEM, Israel – It was the best of weeks and the worst of weeks as Israel signed historic agreements with two Arab countries and then headed for a second coronavirus lockdown just before the Jewish High Holy Days begin.

For the first time in its 62-year history, Jerusalem’s Great Synagogue is closed for high holiday services.

“The reason is a very simple one. The most important criteria in Judaism is the safety, the physical safety of every human being,” said Zalli Jaffe, president of Jerusalem's Great Synagogue. “People are devastated. But, people understand.”

That’s just one causality of Israel’s second coronavirus lockdown which includes closing schools, malls, hotels, and restaurants (except for delivery).

Israelis will only be allowed to venture about a quarter of a mile from home except for exercise or basic needs.

Earlier, Tel Aviv restaurant owners protested the closure, and a group of medical, science, and other professionals say they will submit a petition against the lockdown to the Supreme Court.

Israel has seen a dramatic rise in the daily number of new cases to more than 5,000 per day with around 1,165 deaths.

Israeli President Reuven Rivlin apologized to Israelis for the way the government has handled the pandemic.

“Tonight, I want to tell you that I understand well the feeling of confusion, of embarrassment, of concern, that many certainly feel. I understand and ask before everything else, to apologize for this,” said Rivlin.

Rivlin said the lockdown will harm Israelis’ ability to celebrate, grieve and pray together. He encouraged citizens to be strong, then turned to the government.

"The trust of this people is worth more than gold,” he told government leaders. “We must do everything, everything, to restore personal, medical and economic security to all Israelis.”

“The Israeli national police have completed health and safety measures for the scheduled lockdown, which will continue for three weeks, until the 11th of next month,” he said. “More than 7,000 police officers will take part in blocking different neighborhoods and preventing movements.”

The Israeli military will also work with police to prevent people from violating the government’s lockdown measures.

Israelis at Jerusalem’s open-air Machne Yehuda market had mixed reactions to the lockdown.

“We just want it to be over, but like, I don’t know if this is the answer,” said Jerusalem resident Benny Glove. “We just hope for the best.”

“We’re mad. I’m honest. Because in July and August, everything was open,” said resident Dalia Moshika.

“The fact that we are the first western country to enter a second lockdown, it’s insane,” said Rafael Sophati. “It’s insane because it costs in the financial support for many independent workers.”

“We did really, really well when we had a lockdown. Then we relaxed standards and things went from bad to much worse,” he said.

Some told CBN News there may be a spiritual bright side to it all.

“On one side, it’s very boring because it blocks you in your business and everything. But it helps you [turn] back to the inside and to be focused on the inside. We have lost this inside on those days,” said Ann-Celine Chazan. “So, why not? But we have to be prepared and it’s very stressful.”

“Maybe it will bring us all together more. We’ll be able to stay home and have a little introspection of ourselves and so forth. And I think probably next year, there’ll even be more turnout in the synagogues and the old city. I think it’s going to strengthen us in the end,” said resident David Harrons.