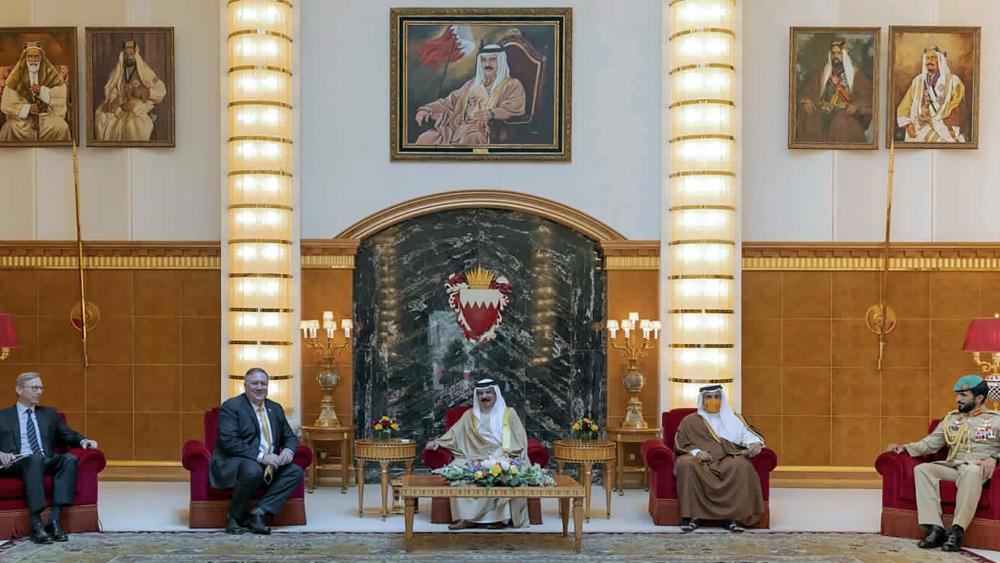 US Sec. of State Pompeo held closed-door meetings on, Aug. 6, 2020 with Bahrain's royal family and top officials in the United Arab Emirates amid the Trump administration's push for Arab nations to recognize Israel.
6190080876001
Trump Announces Bahrain Will Normalize Ties with Israel

JERUSALEM, Israel - Bahrain has become the latest Arab nation to agree to normalize ties with Israel as part of a broader diplomatic push by President Donald Trump and his administration to bring lasting peace to the Middle East.

"It's just a very historic day. A very important day. And so interesting that's it on 9/11," Trump said. "We didn't know that this was going to happen in terms of the timing, but it did happen and we're very honored by it."

Another HISTORIC breakthrough today! Our two GREAT friends Israel and the Kingdom of Bahrain agree to a Peace Deal – the second Arab country to make peace with Israel in 30 days!

The news comes after Trump said during a press briefing Thursday that another country could be "added into" the Israel-UAE agreement announced Aug.13.

"Next week at the White House we'll be having a signing between the UAE and Israel, and we could have another country added into that. And I will tell you that countries are lining up that want to go into it," Trump said.

"You'll be hearing other countries coming in over a relatively short period of time. And you could have peace in the Middle East," he added.

The president mentioned he recently spoke to the King of Saudi Arabia.

Shortly after Israel and the UAE announced their normalization agreement, Bahrain and Saudi Arabia said they will allow Israeli planes to use their airspace. However, both countries have expressed hesitation about establishing official ties with the Jewish State.

The Saudi Kingdom has said any normalization with Israel must follow an Israeli-Palestinian peace deal. Meanwhile, Bahrain said it won't make any major moves without Saudi Arabia.

Bahrain hosted the White House's June 2019 "Peace for Prosperity" workshop aimed at bringing Israel and Palestinians to the negotiating table.

While excitement over the deal is running high among many Israelis, Israeli diplomat Zvi Mazel told CBN News he suspects other Middle Eastern countries are waiting to see the results of America's November elections before they act.

"They would like to see that President Trump is elected and continues his policy. So, they will be sure if they go on and normalize with Israel," he explained. "So I think it's only two months, that's all, to wait."