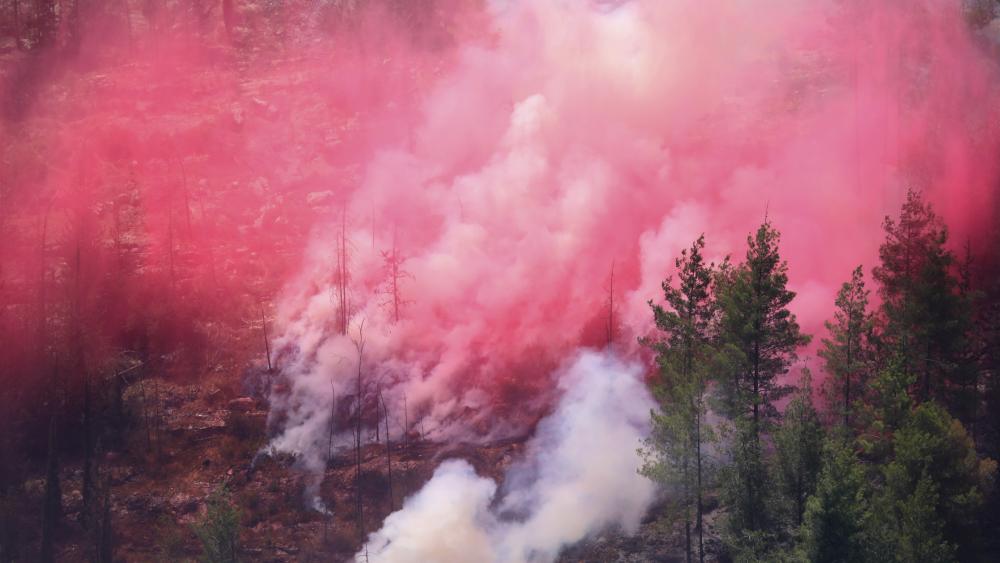 Smoke and red fire retardant sprayed by Israeli firefighting aircraft mingles on a hillside on the third day of wildfires in the Jerusalem mountains, Tuesday, Aug. 17, 2021. (AP Photo/Ariel Schalit)

JERUSALEM, Israel – A massive wildfire that burned through large areas of forested hills just outside of Jerusalem is under control.

“We have put out the fire almost entirely,” Fire and Rescue Commissioner Dedi Simchi told Channel 13 TV on Tuesday. He said there were still hotspots, and that firefighters would work throughout the night to keep the blaze from reigniting.

The three-day battle against the fire required more than 100 firefighting teams, including help from four teams of Palestinian firefighters, and over a dozen firefighting planes. The wildfire was one of the largest in Israel’s history and burned through eight square miles of forest, forcing thousands of Israelis to evacuate their homes.

For the 1st time, "Shimshon" C-130J Super Hercules aircraft are being operated to put out wildfires in Jerusalem. Airborne search and rescue Unit 669 & Home Front Command troops are also on the ground to help extinguish the flames.

We are always on call to protect Israel. pic.twitter.com/JNy6zjcq9n

Residents have begun returning to their homes to assess the damage. There were no casualties and everyone who was reported missing during evacuations was found.

Israel had asked its allies for help with battling the fire, but on Tuesday said it was no longer needed.

"Mutual care and saving human lives are common interests to us all,” he said.

The wildfire filled Jerusalem's skies with a blanket of smoke. The Environmental Protection Ministry warned residents of very high air pollution and urged them to avoid prolonged activity outside.

Simchi said the fire was “100% caused by people.” However, he cautioned that it is still unclear if the blaze is the result of arson or an accident.
“We don’t know yet,” he said.

The wildfire is the second major blaze this month. A fire outside of Jerusalem on August 3 forced dozens to evacuate their homes. In June, several fires broke out near the Holy City. All of these previous fires are suspected of being started by people rather than the weather. However, increasingly hot, dry weather has made the Jerusalem area more prone to fires.