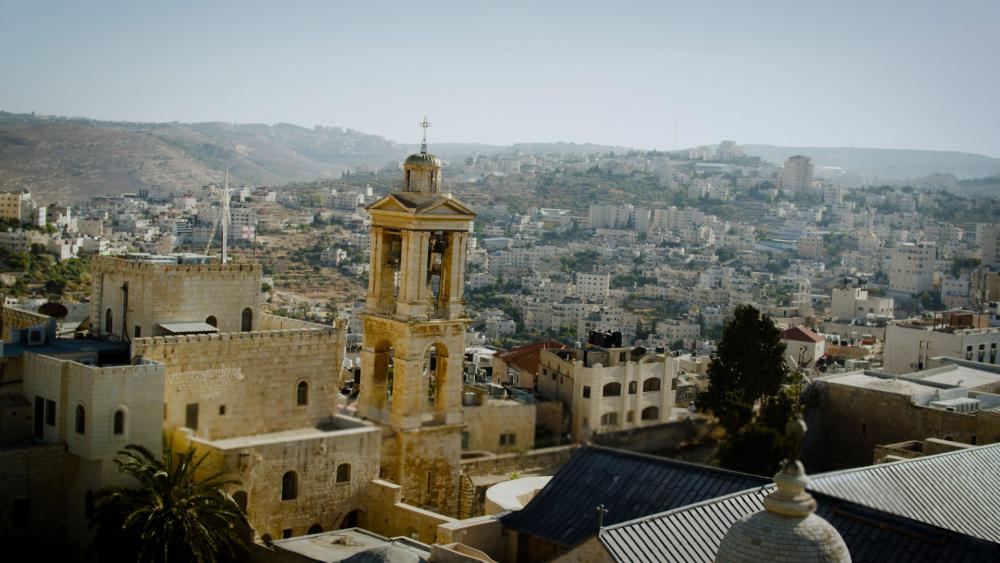 One of the world’s first churches is undergoing major renovations. It’s in Bethlehem and despite COVID limiting visitors, the church’s spiritual life remains strong.

Commissioned by the Roman Emperor Constantine at the request of his mother, Helena, the Church of the Nativity is built over the place where many believe Jesus was born.

“Whenever anybody comes from all over the world, they have to taste and to feel the place where actually Jesus was born here [so] as to give the people the peace and love,” said Father Issa Thaljieh, Greek Orthodox Parish Priest at the Church of the Nativity.  The church was originally built about 1,700 years ago. Since then, it’s been destroyed and rebuilt, a number of times.

The most recent renovation began in 2013 with the help of the Bethlehem Development Foundation or BDF's fund-raising efforts. Its goal is to renew Bethlehem by providing a sustainable life for residents while making the city attractive for visitors. They started by upgrading Manger Square and then moving onto the Church of the Nativity.

Mazen Karam, CEO of BDF, said the original church was octagonal in shape.

“When it was rebuilt because [they] did not have mass earth moving equipment, they built on top of it. So we have like a little over two feet of the change in elevation” between the original church floor and the floor today, Karam told CBN News on a recent visit to the church.

According to Karam, the large colonnade at the current entrance to the church used to be a marketplace but Justinian built the 50 columns in the 6th century and later the crusaders decorated them.

The church had not undergone major renovations for hundreds of years, so restorers started by fixing the very leaky roof and the windows.

“The original [windows are] not here anymore. They replaced them with new windows,” Karam said.

The wall mosaics added to the church more than 850 years ago as well as the original floor mosaics, desperately needed repair.

“Eleven percent of the mosaics exist. The rest was lost. So they cleaned up all the mosaic[s]. [They were] very dirty and, you know, soot and debris and they cleaned it.

In the process came a surprise.

“They discovered the third angel,” Karam said. “The third angel was completely covered with plaster and you can see that all the angels are pointing to the grotto, which is where Jesus was born.”

To help raise money, they also created “adopt-a-column” to refurbish the church’s 50 columns at a cost of around $50,000 each.

Others like art conservator Andreas Miaoulis, from the Greek restoration company Artis, are working to restore the area by the altar, beyond which only priests can go.

“We try to bring everything back to the beginning before it had damage over the time,” Miaoulis told CBN News.

The part at the front of the church decorated with intricate gold-covered carvings is around 250 years old. Miaoulis pointed out how clear it is to see the difference before and after it is cleaned and repaired.

“As you can see these really dark areas are a result of years and years of residual of soot from candles as well as human fat because the majority of the people they touch everything so they leave a lot of little oils [from their fingers],” Miaoulis explained.

“We clean it. We restore it. And then where it's missing gold leaves, we try to put it back on again and resurrect it in a way that it once was,” Miaoulis said.

Karam says renovations are conducted project by project based on available funds.

The Catholic, Greek Orthodox and Armenian Apostolic denominations share guardianship over the church.

“Since [a very] long time, we didn't have any restorations. So, that's the best thing that is doing now,” Father Issa Thajieh told CBN News.

“They’re great because [the] church needs to renovate it. And not only physically the church building [needs to be] renovated, also, we have to renovate ourselves.  We have to be renewed spiritually and to be educated about [the] Lord’s commandments,” said Very Reverend Father Asbed Balian, Superior of the Armenian Apostolic Church at the Church of the Nativity.

Father Issa Thaljieh and Very Reverend Father Asbed Balian say two years of COVID keeping international visitors away has been rough, although they have hope for the future.

“Even there are no tourists, no people, still, we have prayers; we have services going on.  Day-by-day, the church is open and the local people come to visit, to pray. Actually, the COVID-19 teach us how to be patient, to have more faith of God, to trust God that He's standing by us day-by-day,” said Father Issa.

“I pray that may God really remove all [these] difficulties and the life will come back normally and regularly,” the Very Reverend Father Asbed told CBN News. “And also to restart a communion prayer together, praising the Lord and thanking him for all the gifts he has given us and sharing his gifts together.”