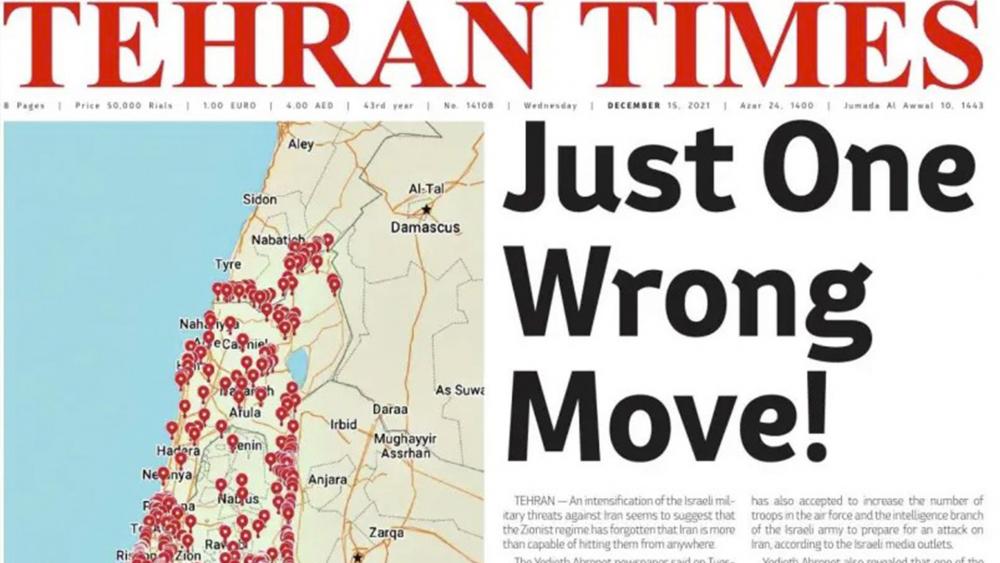 JERUSALEM, Israel – Iran’s state-affiliated newspaper Tehran Times sent a direct threat to Israel on Wednesday, publishing a map of the country highlighted with dozens of potential Iranian targets if the Islamic Republic chose to attack the Jewish State.

“An intensification of the Israeli military threats against Iran seems to suggest that the Zionist regime has forgotten that Iran is more than capable of hitting them from anywhere,” the paper says.

The threat came after Israel and the US warned they were preparing military plans against Iran if negotiations to salvage the 2015 Iranian nuclear deal fail.

The paper cited a recent Israeli news report that the Israel Defense Forces will hold a large-scale exercise over the Mediterranean in the spring to simulate a strike against Iran’s nuclear program. Tehran Times also noted a report from Yediot Ahronot news that said Defense Minister Benny Gantz expressed concern over Iran’s ballistic missiles during a meeting in Washington DC last week.

The article quoted Major General Mohammad Bagheri, the Chief of General Staff of Iran’s Armed Forces, who said that Iran does not underestimate Israel’s threat of military action.

“Despite our confidence in the deterrence situation of the country, our forces have never underestimated the threat of the enemy and are prepared for the smallest of threats in the strategic field,” Bagheri said.

He added, “At the strategic level, we do not intend to strike anyone, but at the operational and tactical level we are ready for a decisive response and a quick and tough offensive against the enemy.”

The Israeli officials said the map of potential Iranian targets is inaccurate and includes cities in Lebanese and Palestinian territories such as Jenin, Ramallah and Nablus. The officials said Iran’s ability to target Israel is extremely limited without help from its proxy Hezbollah in Lebanon.

The Tehran Times article came amid nuclear talks between world powers and Iran over its nuclear program. Both Israel and the UAE are concerned about Iran’s nuclear program, which Tehran says is only for peaceful purposes.

World powers are trying to revive a deal signed in 2015 that puts restrictions on Iran’s nuclear program in exchange for sanctions relief. Former US President Donald Trump unilaterally abandoned the deal, saying it was too weak. Iran responded by also abandoning its commitments to the deal and escalating its nuclear development.

Israel says it would be a mistake to return to the deal, but fears Iran is exploiting the deal’s collapse to advance its nuclear program.

Since the nuclear deal imploded, Iran has started enriching uranium up to 60% purity — a short technical step from weapons-grade levels of 90%. Iran is also spinning more advanced centrifuges in violation of the agreement.