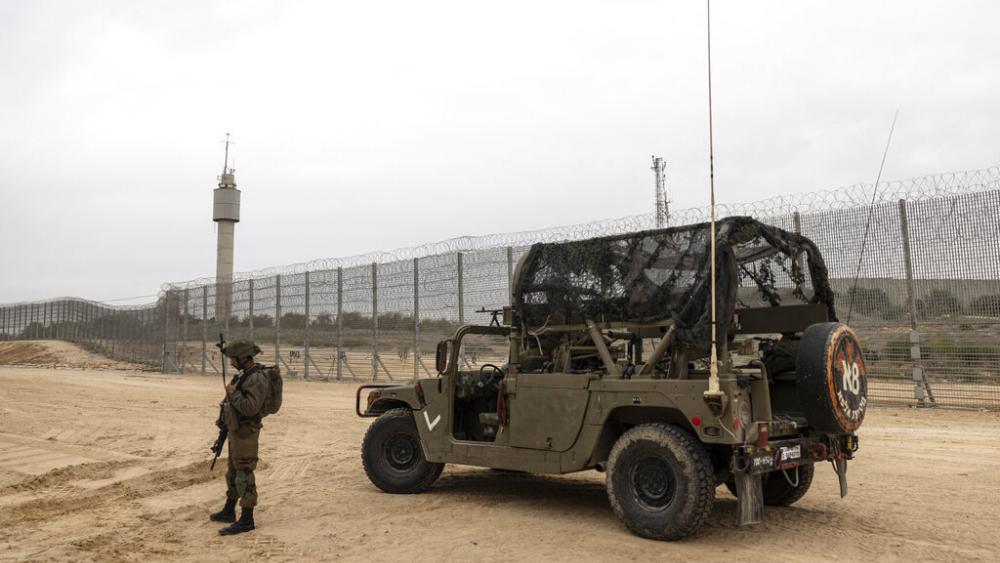 Israeli soldiers secure the site of a ceremony marking the completion of an enhanced security barrier along the Israel-Gaza border,Tuesday, Dec. 7, 2021. (AP Photo/Tsafrir Abayov)

JERUSALEM, Israel – Israel on Tuesday announced the completion of its new 40-mile-long concrete security barrier along the Gaza border designed to confront threats from above and below.

Israel has spent the last 3.5 years building the enhanced security fence. It includes a naval barrier, a network of underground sensors to stop Gaza terror groups from constructing underground tunnels, and a 6.5-yard high “smart fence” with sensors and cameras.

The Defense Ministry also set up several command centers and control rooms along the border to monitor activity.

"The barrier, which is an innovative and technologically advanced project, deprives Hamas of one of the capabilities it tried to develop, and places an ‘iron wall’, sensors and concrete between the terror organization and the residents of Israel’s south,” Defense Minister Benny Gantz said at a ceremony inaugurating the fence. “This barrier will provide Israeli citizens a sense of security and will enable this beautiful region to continue developing and flourishing.”

The Defense Ministry said it took more than 1,200 workers and 140,000 tons of iron and steel to construct the wall.

For years, Israel has raised concerns about the potential for Gaza terrorists to infiltrate southern Israel through cross-border tunnels. Hamas began using tunnels in 2004, when fighters would dig under Israeli positions and then set off powerful bombs. In 2006, the terror group used a tunnel to cross into Israel and capture four Israeli soldiers. The group killed three of those soldiers and kept a fourth one hostage for five years until he was released in a prisoner swap deal.

Hamas used tunnels extensively during its war with Israel in 2014, and during the 11-day war in May, Hamas used a sophisticated tunnel system within Gaza but did not infiltrate Israel.

Israel has improved its ability to detect and destroy tunnels in Gaza and hopes the new border fence will put its military one step ahead.

Brig.-Gen. Eran Ofir, who played a major role in the construction of the barrier, told reporters on Tuesday that the tunnel threat is not completely eliminated.

“I can sign off on the fact that there is a big, significant system that is meant to ensure that no tunnels enter the State of Israel. There is no 100 percent sign-off on anything in life, but we believe that this underground wall gives a very good solution to this issue,” he said.

Now, Israel is focusing on its northern border with Lebanon, where Hezbollah previously built an extensive network of Iranian-backed terror tunnels. According to the Times of Israel,  the Defense Ministry’s current budget includes funds for a similar border fence with Lebanon.