Historic Delegation of Iranians Bring Vision of Peace to Israel 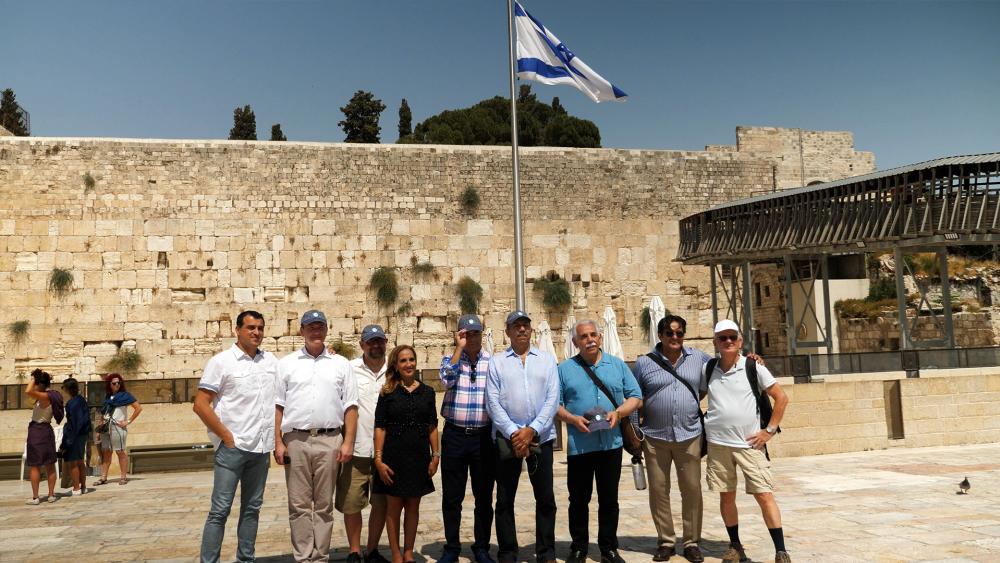 JERUSALEM, Israel - For decades, the Islamic Republic of Iran has committed great time and resources to the destruction of Israel.  Over the years, cracks in support of the Islamic regime continue to grow. That helped lead to a historic visit to Israel this week by a group of Iranian ex-patriots.

The group’s trip came at a tumultuous time for Iran. Demonstrators in the country’s southwest are protesting the government’s decision to limit their water supply.  Several people have been killed and more protests have spread throughout the country calling for regime change.

While these protests continue inside the country, Iranians are showing support to Israel for the first time.

“They want to mark history,” said Ellie Cohanim, Senior Fellow at the Center for Security Policy.

The group came with the Institute for Voices of Liberty, which is dedicated to encouraging democracy in Iran. Cohanim’s family fled the republic when she was five years old.

“They are here to tell the people of Israel that they support them, and they reject the Iranians regime’s anti-Semitism and genocidal desire to wipe Israel off the face of the earth,” said Cohanim.

In 1979, the revolution led by Ayatollah Khomeini turned Iran from a pro-Western power to a country dedicated to destroying Israel and spreading its Islamic beliefs worldwide. The Iranians on this delegation call the past 42 years an aberration in Iran’s long history.

“Unfortunately, this regime is at war with Iranian history, culture, civilization and, most importantly, the Iranian values of tolerance and acceptance,” said Dr. Ben Tabatabaei, an international business and economist.

For the past year, the world has heard about the Abraham Accords, historic peace deals Israel has signed with its Arab neighbors. One of the goals of this delegation is to let people know about the so-called Cyrus Accords.

“Cyrus Accords, a peace deal between Israel and a future free democratic Iran is possible as well,” said Len Khodorkovsky, a former senior advisor to the US special representative for Iran.

These accords are named after the Persian king, who allowed the Jews to rebuild the Second Temple in Jerusalem.

Khodorkovsky says this event led the Iranian people to believe “that for 2500 years, there were warm relations between the people of Israel and the people of Iran.”

Cohanim says her story is a “prime example” of warm relations between Iran and the Jewish people.

“The Iranian Jews, we were one of the most ancient Jewish communities in the world.  We lived side by side with our neighbors for 2500 years. I am Iranian culturally. My heart is still with my brothers and sisters in the country. And so, this Iranian regime that came in in 1979, they are a complete aberration. They preach hatred but the people are rejecting it,” said Cohanim.

Ahmad Batbei, an Iranian activist, served two years in an Iranian prison as a political prisoner.  He, too, is sending a message of love to Israel.

“The main message is we are not your enemy. We love you. We can be not necessarily friends. We can be brothers. We have a lot of cultural values that we can make up a good Middle East with these values,” he said.

Although the mission traveled throughout the country, they felt it significant as Iranians to visit Jerusalem, the city a once-great Persian ruler helped rebuild.

“I wish you could have seen the awe that the various delegates saw when they walked in the City of David, when they heard the history that stems from Cyrus the Great through various millennia and how much the two people have in common,” said Khodorkovsky.

“I think it just reinforced the reason why they came here.  And we hope that this is not a one-off, that this is a beginning of a long-term process, which inevitably ends up in peace and prosperity for both people right after they sign the Cyrus Accords, of course,” he added.

In the meantime, their hearts remain back home.

“Lots of my countrymen inside Iran, which I talk to them, I read them messages and so on, they are hoping. They are desperate and they’re waiting every minute, every for the dismantlement of the Iranian Islamic Republic,” said Hamidi.