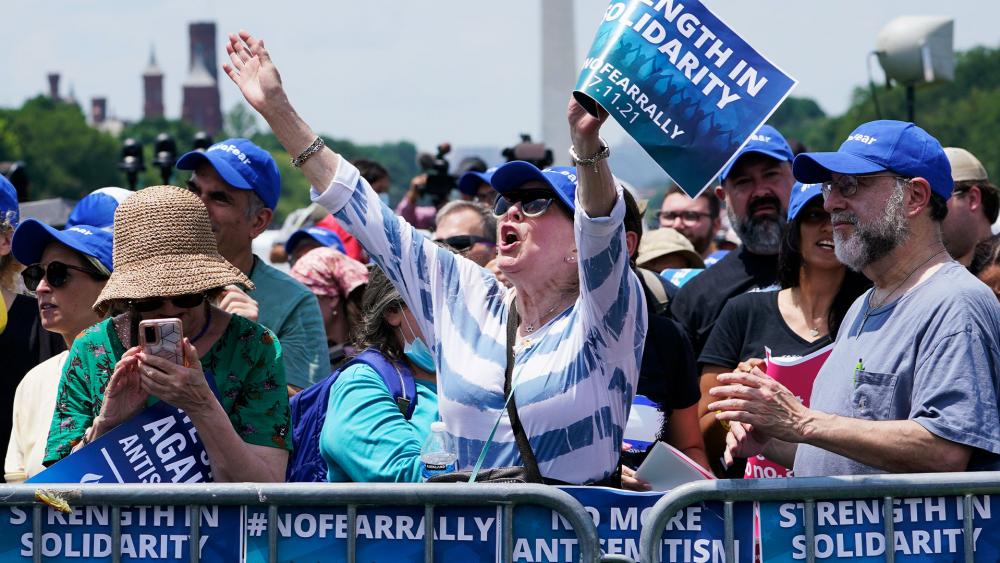 People attend the "NO FEAR: Rally in Solidarity with the Jewish People" event in Washington, Sunday, July 11, 2021. (AP Photo/Susan Walsh).

﻿JERUSALEM, Israel - Thousands rallied together on the National Mall in Washington D.C. on Sunday to protest a rise in anti-Semitism.

The event, titled "No Fear: A rally in solidarity with the Jewish people," drew some 3,000 supporters from numerous Jewish organizations and their allies.

The rally came amid a rise in anti-Semitism in the United States, catalyzed by Israel's war with Hamas in May. Since May, dozens of Jewish institutions across the country have been vandalized or targeted. Just last week, a rabbi in Boston was stabbed repeatedly in an attack he says was "unequivocally" anti-Semitic.

Elisha Wiesel, son of Nobel Laureate and Holocaust survivor Elie Wiesel, was one of the main organizers of the event.

“Here we stand, a coalition of Jews and our allies from all backgrounds, all political beliefs, and all religious affiliations, who have come together to stand up to anti-Semitism," Wiesel told the crowd during his address. "This coalition will not be silenced whether Jews are facing violence in Los Angeles, or Brooklyn, or Paris or Tel Aviv. It won’t be silent whether Jews are being attacked in our synagogues, on our streets, on our campuses, or on the floor of the House of Representatives,” Wiesel added.

Republicans and Democrats seized the moment as a rare opportunity to show unity.

Former Sen. Norm Coleman, chair of the Republican Jewish Coalition, and former Congressman Ron Klein, head of the Jewish Democratic Council of America, took the stage together to address the crowd.
“The fight against anti-Semitism is not a partisan issue,” said Coleman. “We stand united in the belief that each of us has a responsibility to call out anti-Semitism in the political arena, whether it is in our own party or whether it rears its ugly face on the other side of the aisle.”

“Anti-Semitism has no place in America or anywhere in the world,” said Klein. “From this day forward, we must continue to stand together in this fight.”

Other speakers included Rabbi Jeffrey Myers of the Tree of Life Synagogue in Pittsburgh, Pennsylvania, Israeli-American actress Noa Tishby, and many others.