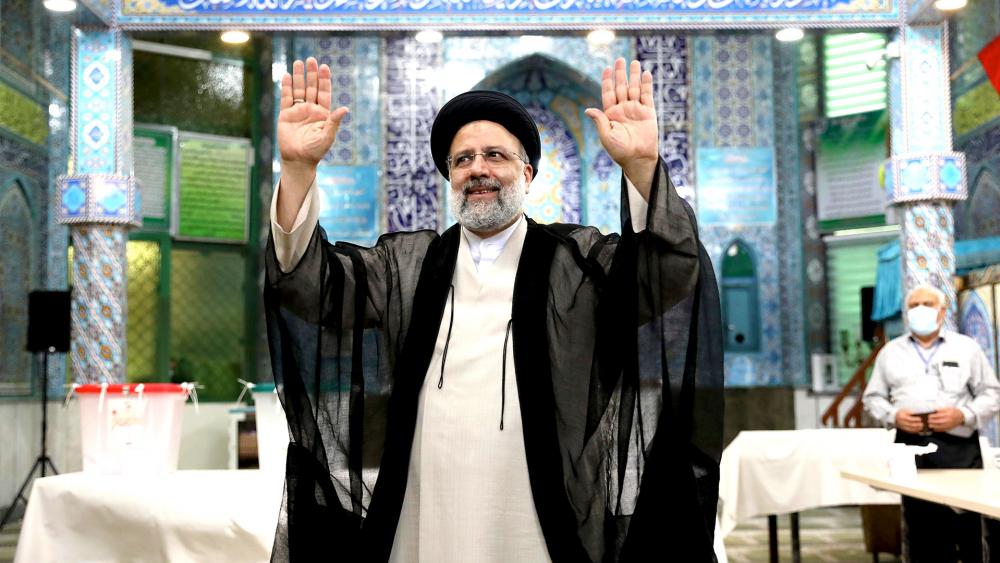 Ebrahim Raisi, a candidate in Iran's presidential elections waves to the media after casting his vote at a polling station in Tehran, Iran Friday, June 18, 2021. (AP Photo/Ebrahim Noroozi)

Voting began at 7 a.m. local time in Iran Friday, as Iranians go to the polls to elect a new president.

Widespread apathy among the people may dampen the turnout after a panel under current Supreme Leader Ayatollah Ali Khamenei barred hundreds of candidates from running, including some so-called reformists, and stacked the deck for a hardliner to take the prize.

Just 42% of 59-million eligible Iranians are expected to vote, which would be the lowest turnout ever since the country's 1979 Islamic Revolution.

State-linked opinion polling and analysts say hard-line judiciary chief Ebrahim Raisi is the dominant front-runner in a field of just four candidates. Former Central Bank chief, Abdolnasser Hemmati, is running as the race's moderate candidate but hasn't inspired the same support as outgoing President Hassan Rouhani, who is term-limited from seeking the office again. In the Iranian system, whoever wins as president will serve under the Supreme Leader - now Khamenei - who has the final say on all matters of state and oversees its defense and atomic program.

If elected, Raisi will come to power already with blood on his hands. He has headed Iran's internationally criticized judiciary, one of the world's top executioners. He also would be the first serving Iranian president sanctioned by the U.S. government even before entering office over his involvement in the mass execution of political prisoners in 1988.

And if elected, there's no question Iran under a President Raisi will continue as the world's chief exporter of terror and remain in hot pursuit of nuclear weapons for the terror state.

The recent attacks by Iranian terror puppet, Hamas, against the state of Israel are a prime example of Iran's terror leadership.  CBN News reported that Hamas thanked Iran for supplying the more than 4,000 rockets launched from Gaza into the heartland of Israel during the recent 11-day conflict.

Hamas leader Ismail Haniyeh openly gave much of the credit to Iran.

"I cannot but thank those who brought forth money and weaponry to the valiant resistance, the Islamic Republic of Iran, who did not hold back money, weapons, and technical support," he said after the conflict.

During the 11-day onslaught, Prime Minister Netanyahu displayed an Iranian drone intercepted on the Jordanian border, saying, "It says everything on the true patron of terror in the Middle East, in the world - Iran."

Yet, it's her northern border with Lebanon that likely gives Israel's leaders the most sleepless nights. There, Iran essentially created the terror group Hezbollah, which is now 10 times the threat to Israel that Hamas has been.  Hezbollah possesses up to 200,000 Missiles.

Meanwhile, as their country wastes resources fueling terror abroad, and appears on course to stifle the economic life and prosperity of its own citizens, an amazing thing is happening among many Iranian Muslims - they are turning to Jesus Christ.

CBN News long has chronicled revival in Iran, a move of God which seems to gather steam despite harsh government reprisals, and even during last year's COVID crisis.

"That's why we are calling this a pandemic of hope," said Mike Ansari, who runs Mohabat TV, one of the most popular Christian satellite channels in Iran.

Ansari told CBN News that Mohabat TV is recording 10 times more online salvations than at the same time the year before.

"We are registering around 3,000 personal decisions by Iranian Muslims to leave Islam for Christianity during this revival," Ansari said.

That's 3,000 people each month who've decided to follow Jesus Christ since the pandemic began in March of 2020.

"People in Iran are just not happy the way their economy is going, the way the government is robbing them of their national resources and exporting Shia Islam to the neighboring countries, so they just don't trust their government," said Ansari.

The large number of people leaving Islam is causing a backlash against the church. Dozens of Christians have been arrested and imprisoned for responding to the gospel message since March of 2020.

"During these critical times for the regime, there's a tendency, historically, for the regime to really crack down on religious communities like Christian converts, and we see that today," Alireza Nader, an Iranian expert with Foundation for Defense of Democracies, told CBN News.

Iran is one of the world's most dangerous places for Christians. And it's the key fomenter and funder of danger and havoc outside its own borders. But as Iran today likely elects a hardline Islamic president, there is hope among a group of people who increasingly defy the desperation foisted on them by their government.  That hope - today Christianity is growing faster in Iran than in any other country in the world.