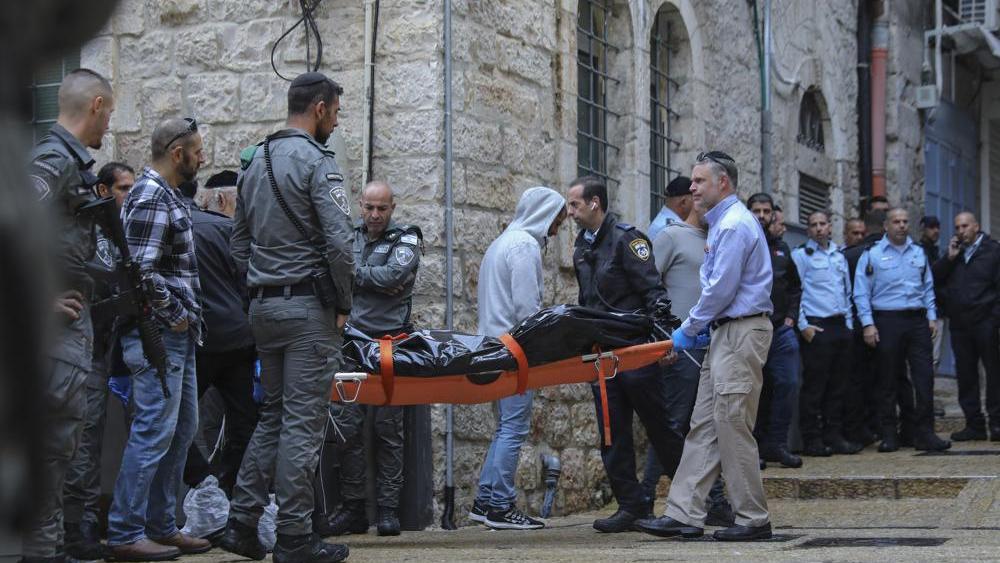 Israeli security personnel and members of Zaka Rescue and Recovery team carry the body of a Palestinian man who was fatally shot by Israeli police after he killed one Israeli and wounded four others in a shooting attack in Jerusalem's Old City, Sunday, No

JERUSALEM, Israel – Israeli security forces are on alert after a Hamas terrorist opened fire in Jerusalem’s Old City on Sunday, killing one Israeli and injuring four others, Israeli officials said.

According to police, the gunman opened fire on civilians and security forces near the entrance of the Temple Mount around 9 a.m. Sunday morning. Police officers fatally shot the gunman at the scene. He was later identified by Palestinian media as 42-year-old eastern Jerusalem resident Fadi Abu Shkhaidem.

“[The gunman] moved through the alleys and fired quite a bit. Luckily, the alley was mostly empty because otherwise — heaven forbid — there would have been more casualties. The entire incident lasted 32 or 36 seconds,” Public Security Minister Omer Barlev said at the scene of the attack.

Israeli officials said Eliyahu Kay, a 26-year-old immigrant from South Africa, was killed in the shooting. Kay had worked as a tour guide at the Western Wall. Two of the four victims who were wounded in the attack were hospitalized with serious injuries. Kay moved to Israel on his own and was engaged to be married.

Barlev said the shooting appears to have been premeditated.

“The terrorist was a member of Hamas’s political branch who regularly prayed in the Old City. His wife fled abroad three days ago, and he used standard weapons that are not commonly available in Israel,” Barlev said.

Hamas, which controls the Gaza Strip and is sworn to Israel’s destruction, praised the shooting as a “heroic operation.”

“Our people’s resistance will continue to be legitimate by all means and tools against the Zionist occupier until our desired goals are achieved and the occupation is expelled from our holy sites and all of our lands,” spokesman Abdel Latif al-Qanou said.

Hamas confirmed that Shkhaidem was one of its members and claimed responsibility for the attack. Members of Hamas reportedly gave out candy in Gaza in honor of the attack.

Separately, dozens of right-wing Israeli nationalists marched through Jerusalem’s Old City in honor of the attack victims. Video online shows some of them chanting anti-Arab slogans.

Sunday’s shooting is the second terror attack in Jerusalem in less than a week. On Wednesday, Israeli police shot and killed a Palestinian youth who stabbed a security officer in the Old City.  Meanwhile, in Jaffa, Israeli police arrested a Palestinian teen accused of stabbing and injuring a 67-year-old man on Sunday. Authorities suspect the incident was a terror attack but have not ruled out other motives.

“I have directed the security forces to prepare accordingly and be alert, also over concern for copycat attacks. We need to be on heightened alert and prevent future attacks,” said Bennett.

The State Department issued a statement condemning the shooting and urged US government employees and their families to avoid the Old City until further notice.

Israel, the US and the European Union consider Hamas a terrorist organization. On Friday, Britain said it would ban the group and would no longer differentiate between Hamas’ political and military wings.

“The fact the terrorist was from Hamas ‘political wing’ compels the international community to recognize it as a terror group,” Herzog tweeted.

Hamas has fought four wars against Israel since it took control of Gaza from the rival Fatah group in 2007. Palestinians have carried out many car-rammings, stabbing and shooting attacks in recent years. However, shootings in Jerusalem’s Old City are rare due to Israel's security presence in the area.