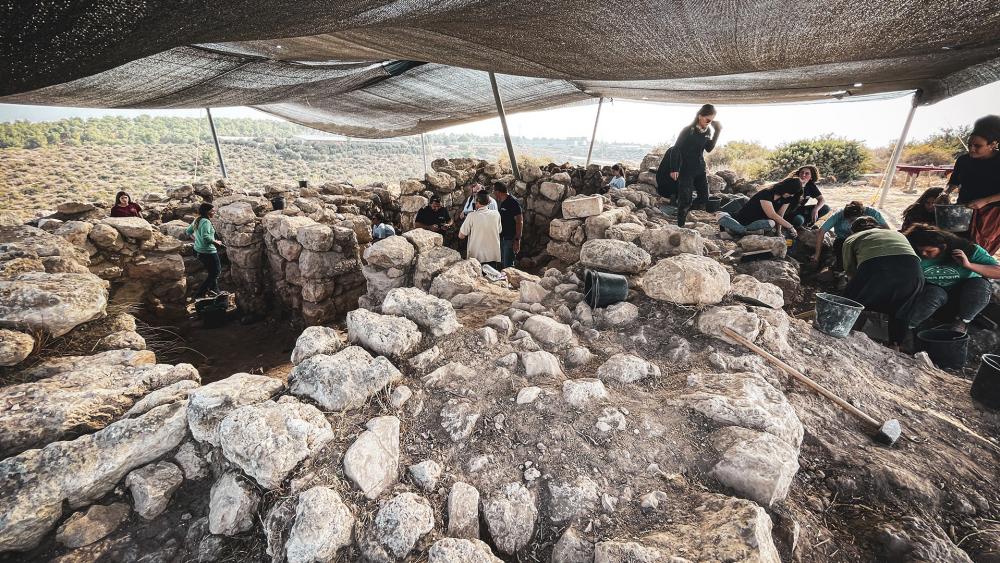 Israeli archaeologists have uncovered evidence they contend backs up the stories of a Jewish victory over Greek rulers – events that are connected to the celebration of Hanukkah.

More than two thousand years ago, a hilltop fortress with a commanding view was supposed to protect the Greek-ruled city of Maresha from a legendary Jewish revolt.  But Israel Antiquities Authority archaeologists digging in the Lachish Forest, say it didn’t work.

They say they have evidence of the Hasmonean Jewish victory – better known as the Maccabees – over the Seleucid Greek rulers – despite Seleucid attempts to fortify and protect the encampment.

“What we discovered here actually connects with the story of Hanukkah and the Hasmonean revolts against the Greeks,” said Excavation Director, Achinoam Montagu.

The excavation revealed a well-fortified 50-foot by 50-foot building that had been destroyed. Montagu said they uncovered the walls of the structure, which were nearly ten feet wide and sloped to prevent invaders from scaling the wall.

“We also uncovered a destruction layer, which in it we found hundreds of artifacts, including pottery and coins and weapons, which we dated back to the second century BC,” Montagu told CBN News at the site.

“We believe that the destruction was done by the Hasmoneans as part of their conquest of Idumea in 112 BC.” (Idumea was the name for the area at the time and comes from the biblical name Edom.)

The structure would have been about 16 feet tall with seven rooms and a stairwell leading to a second floor.

“The destruction layer was about half a meter and here we have the wood blocks from the roof. We believe that the roof collapsed and on the roof the rest of the walls and the building. During the excavations we took out hundreds of stones, until we reached the destruction layer,” Montagu explained.

The Hasmonean Jews were descendants of the legendary Maccabee family that rose up against the idol-worshiping, Greek-Seleucid rulers of the day.

As part of the revolt, they cleansed the Jewish Temple in Jerusalem and found enough oil to burn in the Temple menorah (candelabra) for one day. According to the story, it burned for eight days and thus the eight-day holiday of Hanukkah was born.

Though Hanukkah, also known as the Feast of Dedication, isn’t mentioned in the Old Testament, it is in the New Testament in the Book of John 10:22-23.

Some 40 miles from the Temple Mount, the Hasmoneans were also victorious.

“We know the stories of the Jews against the Greeks and this is just the proof of that happening,” Montagu said.

The site was full of treasures like small jars used to hold mostly expensive materials like oils or perfumes; a bronze pin used to hold together a piece of clothing, pottery shards, dozens of coins and part of a sword.

High school students helping in the excavation are also learning important skills and connecting with their past as part of a program called Eretz Israel or Land of Israel studies.

“They arrived the first day, they have no idea what they're doing. And after a few days, they come and tell me what they found and they can explain to me everything. And so, seeing them actually learn through the process of digging and touching the history and making history by digging the site,” Montagu explained.

Dvora Neor is one of the teachers who brought her students for the experience of digging at the site.

“Part of bringing the class outside, you know it’s like the laboratory of biology. Part of it is touring Israel,” Neor told CBN News.

The students were touched by their experience.

“From reading it in the book, it’s make it like alive. We see it in our eyes. We touch it. It’s not something we heard in the school. It’s a true story that we touch for real,” said Aanat Cterenberg.

“It’s like the story of Hanukkah is the story here about the Maccabim [Macabees]. So, we’re digging, and these are people that were in the same time and we’re really digging up the history that we’re living it now and celebrating Hanukkah now,” Moriyah Ariel told CBN News.

While this area will eventually be open for the public, experts say the most exciting part is how the excavation breathes life into history from 2,000 years ago.