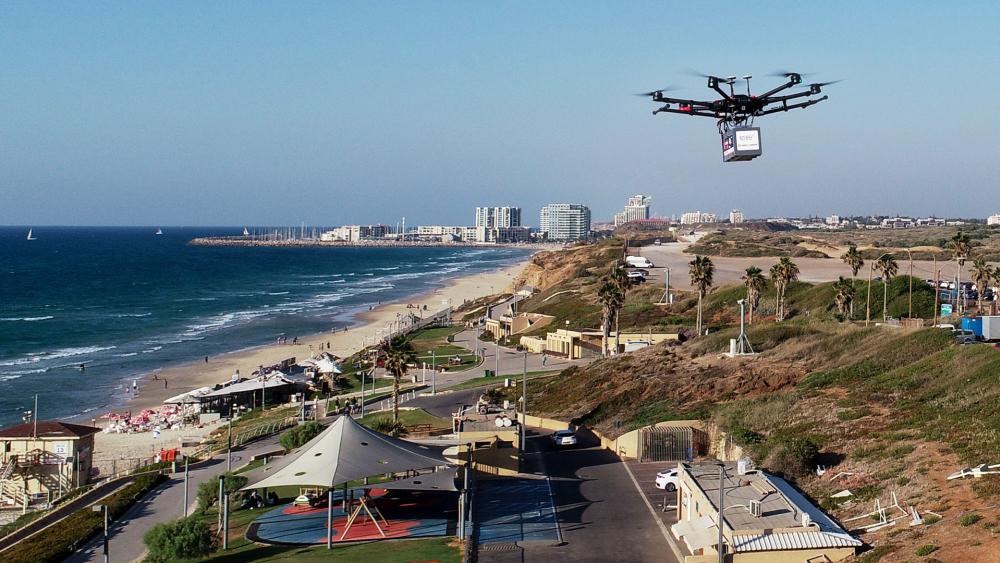 Military drones have been filling the skies over troubled regions for years and the race is underway worldwide to make them more relevant in everyday life.  One pioneering effort in Israel is being called part of a Fourth Industrial Revolution.

Drones could become the delivery vehicles of the future. At a recent demonstration, drones completed a special mission as they landed in Tel Aviv near the beach -- delivering sushi from Japanika restaurant some seven miles away in Herzliya.

Alon Abelson is CEO and co-founder of Highlander, a drone and unmanned traffic management solution (UTM) that helps keep the skies safe for this growing technology.

“You see, you can see multi drones taking off doing delivery, coming back, land, finish the delivery process. Everything autonomously,” Abelson explained at the demonstration. It’s the third of eight stages expected to reach new heights over the next two years.

“So, there is no pilot involved, no one is flying the drone and you still need someone to make sure the drones flying avoid collid[ing] between themselves, landing safely in the right location,” Abelson told CBN News.

These are among the first commercial drone deliveries in central Israel and the city of Tel Aviv.

“We started from zero flights two years ago; 700 flights in the first year and now we're close to 9,000 flights. So, we're definitely progressing even faster than we predicted,” said Danilla Partem, who heads the newly formed Israeli Center for the Fourth Industrial Revolution of the Israel Innovation Authority.

“Our aim is, first of all, to create a more enlarged ecosystem. So, if we add more cities, more urban areas in order for this to be an economically viable system, we would have to enable larger drones flying longer distances in order to deliver heavier goods to more areas,” Partem told journalists.

Joined by the Civil Aviation Authority and the Ayalon Highways, both of the Ministry of Transport, the project is a collaboration between the government and 16 local and international companies.

“Each company has its own business case, but our goal is to create the regulatory and … technological infrastructure for them to be able to do that in an economically viable ecosystem,” Partem said.

The various companies work together toward solutions in key areas ranging from air traffic control and flying the drones to deliveries and security.

“We have an advantage in the fact that we're testing several companies in one airspace controlled by one company,” said Libby Bahat, Head of the Aerial Infrastructure department of the Civil Aviation Authority.

“We are a crowded country in terms of airspace. We have high-security needs, so these are challenges, but I think we know how to approach them,” he said.

Despite the challenges, Eyal Bilia from Ayalon Highways explained why drones are a good and timely idea.

“The lower airspace is unused today. So we're trying to open the lower air space in order to deliver all kinds of goods and deliveries from one place to another,” Bilia told CBN News. “And by that, we're going to reduce traffic that's traveling on the highways.”

According to Yoely Or, former general and current CEO of CANDO Drones, the Israeli military has been using this technology for 10 years.

“We take it from the military side and adapt it for our needs in the civilian side,” Or said.

Working along with security and traffic control, CANDO can manage up to 250 drones at a time.

“First of all you save time, you save money and it’s green for the air [environment],” he said. “The police have drones now, the fire control, they have drones, many organizations have drones. So, the drones have to speak with each other.”

All the founding members of Airwayz came from the Israeli Air Force. CEO Eyal Zor explained how these experts in airspace management make in all work.

“We are using advanced AI algorithms in order to manage a dynamic airspace of drones. We try to mimic the traditional aviation, like air traffic controllers and pilots with our system in order to show that we can operate [a] maximum number of drones in a dynamic urban setting,” Zor told CBN News.

Deliveries are currently limited to between businesses given the need for a drone landing pad.

The order is placed through an app then prepared, loaded on the drone, flown to the delivery site, collected, and taken to the customer.

Daniel Rahamim heads up Mishlocha – one of the most popular and fastest-growing delivery apps in Israel. He said people are ordering more and more things for delivery not just food from restaurants.

Until now, Mishlocha relied on conventional delivery methods like scooters.  As a technology company, though, Rahamim said he’s always looking to the future.

“We don’t have any doubt that the next stage will be the drones because this is the best way, the fast[est] way and the safe[est] way to move things from one side to each other,” Rahamim told CBN News.

“In Israel, because it’s a technology country and a small country you can do things fast on a scale for all the country and it can be a model for other countries to do it,” he said.

Yahav Preiss is Vice President of Flytech, the aerial operator. He says the drones can transport a delivery weighing about 4-1/2 pounds.

“I think that the most important thing about today, [is] it’s the first time [in] Israel you can see this kind of project, which means [it’s the] first time we fly drones with no eye contact through the computer like another UAV,” Preiss told CBN News.

Though the demonstration focused on getting ice cream to waiting journalists, Preiss said the vision reaches much further than just food delivery.

“This is the platform to show that the technology is there, and safety is there. We want to provide much more important things to civilians, like big orders and machines and medicine,” Preiss said.

“We are [making] great progress today. We are writing the cookbook for the new airspace, the economic airspace of deliveries,” Bilia said.

Hospitals and medical facilities could be big winners with these deliveries, receiving lifesaving materials quickly with no traffic jams. And consumers in the future will likely benefit in ways we haven’t even imagined.