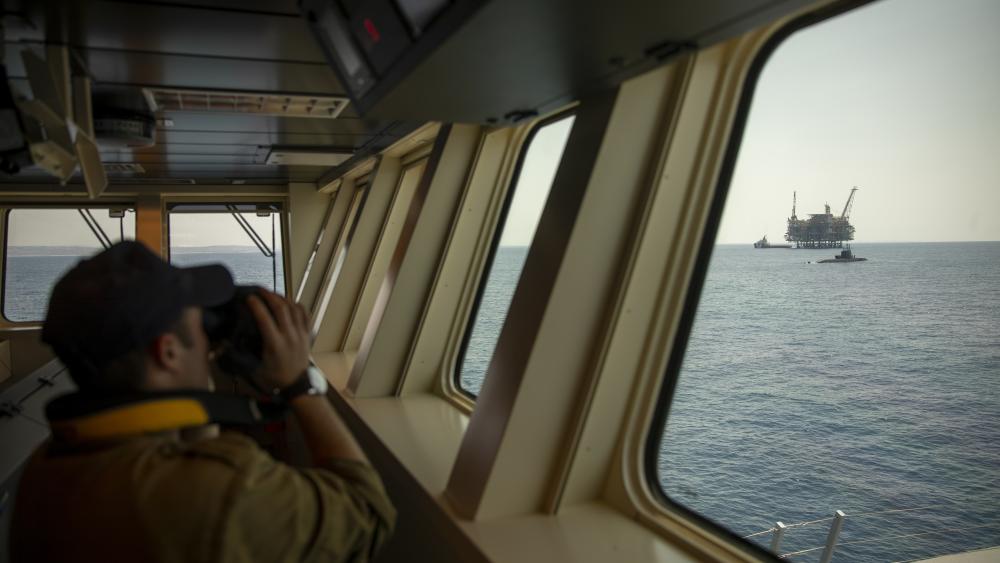 An Israeli Navy sailor looks at Israel's offshore Leviathan gas field from on board the Israeli Navy Ship Atzmaut as a submarine patrols in the Mediterranean Sea , Wednesday, Sept. 1, 2021.

JERUSALEM, Israel – Israel’s navy has “exponentially” increased its activities in the Red Sea to confront Iranian threats to Israeli shipping, the country’s outgoing naval commander said in a rare interview.

Vice Adm. Eli Sharvit said Iran is a major threat to Israel and the military is prepared to strike whenever and wherever it needs to.

“The state of Israel will protect its freedom of navigation across the globe,” Sharvit told The Associated Press, days after completing his five-year term. “That’s not related to distance from the country.”

Israel says Iran is developing a nuclear weapon – a claim Iran rejects. The two countries have engaged in a shadow war that has seen recent explosions on Iranian and Israeli-linked cargo ships.

Israel is particularly concerned with protecting its interests in the Red Sea, which hosts key global shipping routes. Almost all of Israel’s imports come by sea.

“We have increased our presence in the Red Sea most significantly,” Sharvit said. “We are operating there continuously with main ships, that is to say missile frigates and submarines. What in the past was for relatively short periods of time is now done continuously.”

“If there were an attack on Israeli shipping lanes or Israeli freedom of navigation, Israel would have to respond,” he added.

Sharvit stopped short of confirming Israel’s responsibility for recent mysterious attacks and mishaps on Iranian ships but said the navy has intercepted Iranian arms shipments to Hezbollah – a terror organization based in Lebanon.

“We are very vigilant concerning seaborne arms shipments, and every time that a shipment is one of arms, and not something else, we act,” he said.

Hezbollah successfully struck an Israeli naval vessel during a war in 2006, killing four soldiers. Israel says the Iranian-backed terror group has significantly upgraded its missile stockpile since then.

Another threat is to Israel’s south – the Hamas terror group that controls Gaza.

Sharvit says Hamas has developed a small but well-trained unit of naval commandos who have advanced equipment allowing them to travel underwater well up Israel’s Mediterranean coastline.

During the 11-day war with the terror group in May, Israel says it stopped an attempt by Hamas to launch a torpedo-like underwater drone at Israeli targets.

Israel and Egypt have maintained a tight naval blockade on Gaza since Hamas seized control in 2007. Israel says the blockade and heavy restrictions on Gaza are needed to prevent Hamas from obtaining more weapons. Critics argue the policy is collective punishment on impoverished Gazans.

But Sharvit said it is hard to separate the civilian and military realms because Hamas uses its water to train its navy commandos and test rockets it plans to launch at Israel.

“The sea is the biggest test site in Gaza,” he said.

While Israel’s navy can confront threats from Hamas and Hezbollah, Yoel Guzansky, a senior fellow and Iran expert at the Institute for National Security Studies in Tel Aviv, cautioned against depending heavily on the navy in its overall strategy against Iran.

He said the Israeli navy is “good but small,” and “some operations may be an overstretch.”

“I would put my efforts elsewhere,” he said.

Time Is Running Out: Israel Warns Iran's Nuclear Program at 'The Most Advanced Point Ever'
CBN News Email Updates