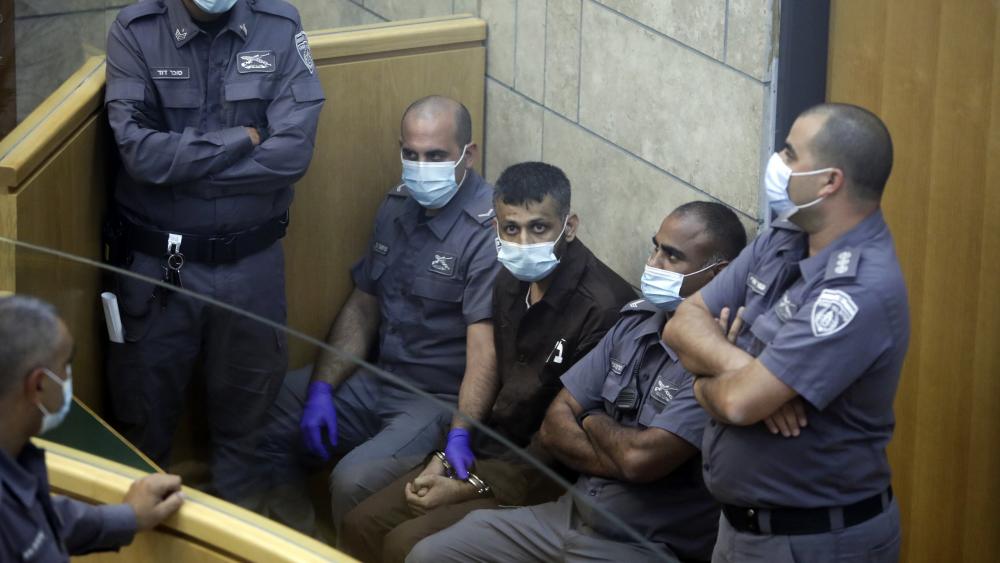 Mohammed Aradeh, center, is surrounded by guards in a courtroom in Nazareth, Israel, after he and three other Palestinian fugitives were captured on Saturday, Sept. 11, 2021. (AP Photo/Sebastian Scheiner)

JERUSALEM, Israel – Israeli police re-captured four of the Palestinian prisoners who escaped from one of the country’s maximum-security detention facilities last week and are still looking for two fugitives who remain at large.

The four men were caught on Saturday during a pair of arrests in the northern Israeli towns of Nazareth and Shibli–Umm al-Ghanam.

The men managed to evade capture for five days, but police found them after local Israeli Arabs spotted them and tipped authorities off. The men appeared to have received no help following their escape and had no planned route for where to go, Israeli media reported.

They appeared before court late Saturday evening where prosecutors are pushing terrorism charges following their escape. All six escapees were serving time for terrorism, including the notorious Fatah terror leader Zakaria Zubeidi, who was among the men captured on Saturday.

Police found Zubeidi and another fugitive in a parking lot in Shibli–Umm al-Ghanam. Hours earlier, police arrested two of the escapees in Nazareth after they were spotted digging through trash looking for food.

Israeli Prime Minister Naftali Bennett praised authorities for finding the four fugitives and said they will find the remaining two.

“We have to maintain heightened readiness and continue until the mission is complete,” Bennett said.

The six men tunneled out of Israel’s Gilboa prison in an escape that embarrassed prison officials and exposed major flaws in the country’s security system.

Israeli media reported several blunders by prison officials that contributed to the prison break. For example, the prison’s blueprint was available to the public online, one watchtower guard slept through the incident while another watchtower overlooking the prison’s exit was unmanned. Prison officials also reportedly missed signs of digging right under their noses.

Bennett Sunday said the prison break was a “wake-up call.”

“The amount of energy and efforts needed to fix the series of mistakes and failures that simply did not need to happen is enormous,” the prime minister said. “It requires an investigation and for lessons to be learned.

Palestinians consider prisoners held in Israel to be heroes of their national cause and have celebrated the escape, leading to unrest and rockets from terror groups in Gaza.

The Israel-based organization Palestinian Media Watch estimates the six prisoners serving time for crimes including murder and facilitating suicide attacks have been paid a cumulative of more than one million dollars by the Palestinian Authority while serving time in Israeli prisons.

Many Palestinians expressed disappointment on social media following news of the fugitives’ recapture.

A spokesperson for the Hamas terror group in Gaza said that despite their re-arrest, the episode “scored a victory and harmed the prestige of the Israeli security system.”

Hamas also pledged to include the six prisoners in any future prisoner swap deal with Israel.

“The heroes of the ‘freedom tunnel’ will come out with heads held high and the Qassam command has decided that there will be no exchange deal without freeing those heroes,” said the spokesman, Abu Obaida, using the name of Hamas' military wing.

Hamas is believed to be holding the two Israeli civilians and the bodies of two Israeli soldiers who were killed during the 2014 Gaza war.

The prison break is considered one of the worst ones in Israeli history and further strained relations between Hamas and Israel. Israel hit several Hamas targets early Monday morning after the terror group launched two rockets at the country. Both rockets were intercepted by the Iron Dome Missile Defense System.

On Friday, Hamas called for a “Day of Rage” to protest Israel’s crackdown against imprisoned Palestinians, following the prison break. A Palestinian terrorist reportedly attempted to stab Israeli police officers in Jerusalem’s Old City on Friday but was shot dead. One officer was lightly wounded. 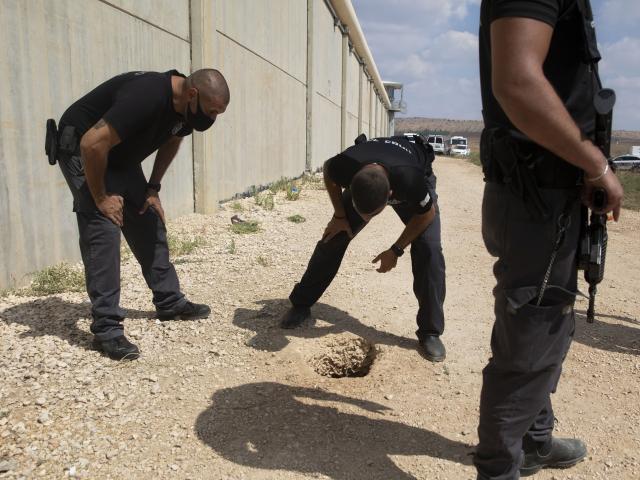