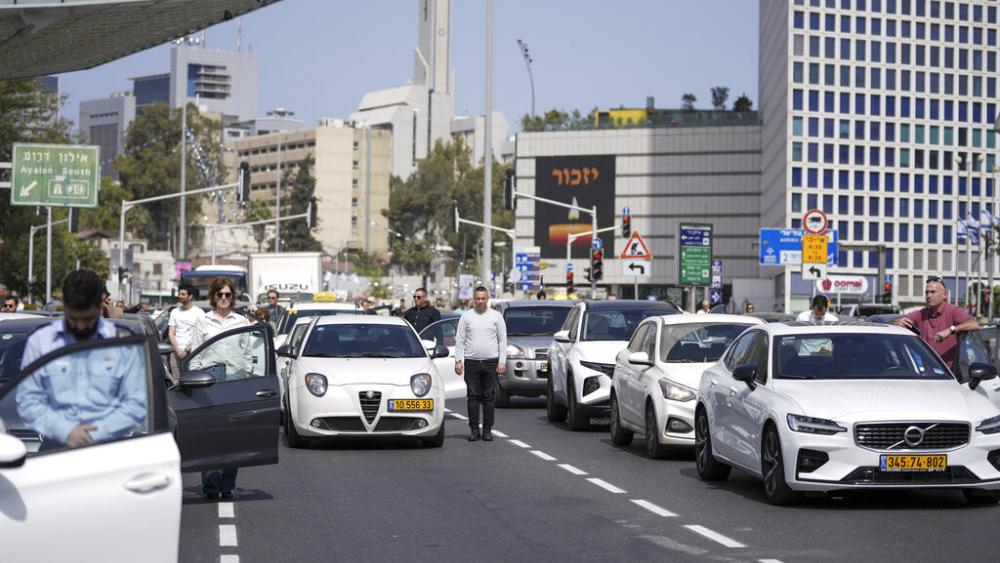 Israelis stand still next to their cars on a main road as a two-minute siren sounds in memory of victims of the Holocaust in Tel Aviv, Israel, Thursday, April 28, 2022. (AP Photo/Ariel Schalit)
6305322453112
Israel Observes Holocaust Remembrance Day Amid a Global Rise of Anti-Semitism

JERUSALEM, Israel – On Thursday, millions of Israelis stood still for two minutes to honor the victims of the Nazi genocide on Holocaust Remembrance Day.

People stopped their daily work and drivers stood by their parked cars in the middle of the road to remember the six million who were murdered.

Speaking at a ceremony at Jerusalem’s Yad Vashem Holocaust memorial Wednesday night, Prime Minister Naftali Bennett said “no event in history” can be compared to the cruelty of the Holocaust.

“My brothers and sisters, the Holocaust is an unprecedented event in human history. I take the trouble to say this because as the years go by, there is more and more discourse in the world that compares other difficult events to the Holocaust. But no. Even the most difficult wars today are not the Holocaust and are not comparable to the Holocaust,” said Bennett.

Bennett explained that while history “is full of cruel war, brutal murders and also genocide,” they usually were means to achieve a military, political, economic or religious goal. However, the Holocaust was designed with one aim – to exterminate Jews for simply being Jews, he said.

“Never, in any place or during any time, has one people acted to destroy another in such a planned, systematic and indifferent way, from a place of absolute ideology and not out of utilitarianism. The Nazis did not kill Jews to take their jobs or their homes. The Nazis sought to hunt all Jews and exterminate every last one of them,” said Bennett.

Bennett said anti-Semitism, which has been around for thousands of years is still alive today.

“Whenever we are tempted to believe that we have entered a new, liberal, modern era in which people no longer hold on to Jew-hatred, reality awakens us to the truth,” he said.

A new report from Tel Aviv University showed a sharp increase in the number of anti-Semitic incidents from 2020 to 2021 in the largest Jewish populations outside Israel. Researchers say that increase was fueled by the COVID-19 pandemic and Israel’s 11-day war with Hamas last May.

Bennett noted the Jewish people had been in exile for nearly 2,000 years when the Holocaust took place.

“The Jewish people can live in the Diaspora and dream about Jerusalem, but eventually, the genuine and natural existence of our people can only truly take place by our physical presence in our original homeland, here in the Land of Israel. Building this homeland is an obligation but also an enormous privilege for all of us,” he said.

Statistics indicate about 165,000 Holocaust survivors live in Israel and 273 are newcomers, who fled the ongoing war in Ukraine.

Worldwide, at the end of 2020, there were 15.2 million Jews, similar to the global Jewish population in 1939 just before the outbreak of World War II.

The prime minister urged Israelis to stand together as a united and strong nation so that they can face the challenges of anti-Semitism today.

“Today, thank God, in the State of Israel, we have one army, one government, one Knesset and one nation – the people of Israel. When we are united, no external enemy can beat us,” said Bennett.

In addition to speeches by Bennett, Israeli President Isaac Herzog and others, Holocaust survivors lit six torches at the Yad Vashem ceremony – for the six million Jews murdered by the Nazis and their collaborators.

During Wednesday night’s ceremony, places of entertainment and restaurants closed and television screens either went dark or only featured programs about the Holocaust.

Other ceremonies remembering the genocide are also held throughout Israel on Thursday.