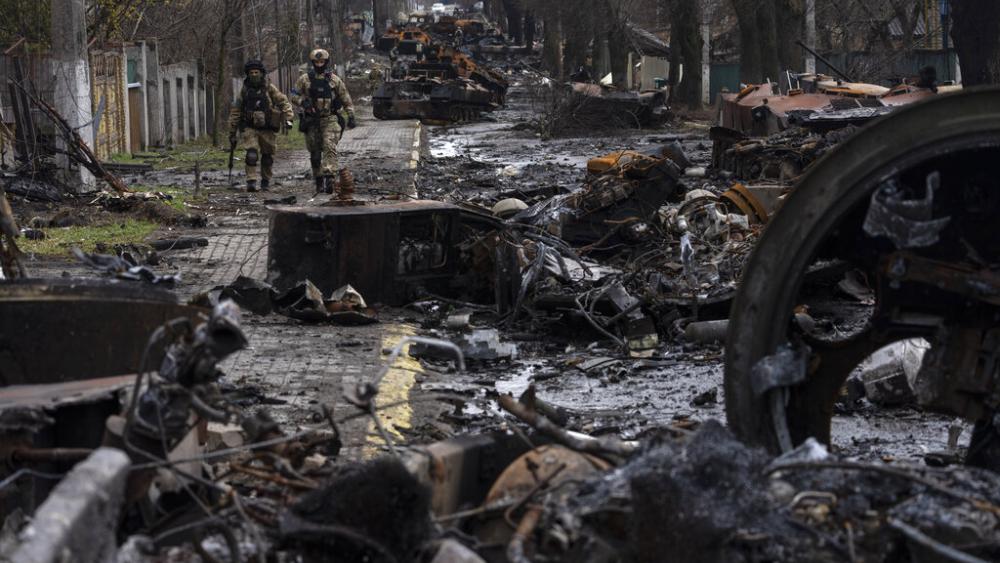 ABOVE: Ukraine is accusing Russian forces of committing war crimes in the city of Bucha, near the outskirts of Kyiv. We want to warn our viewers that some of these images are disturbing.

Western leaders are condemning the atrocities believed to have been committed in Ukrainian towns by retreating Russian troops. Officials say the bodies of 410 civilians have been found in towns around the capital, Kyiv, that were recaptured from Russian forces.

In the city of Bucha, northwest of the capital Kyiv, bodies lie in the streets, some victims with their hands bound and others shot at close range. Local officials say it appears some were tortured.

Among those killed was the Academic Dean of the Slavic Evangelical Seminary, Vitaliy Vinogradov, reportedly shot dead by the retreating Russian army.

Bucha's mayor said hundreds of townspeople were buried in a mass grave. A satellite image showed a 45-foot long trench near a church.

Residents said Russian troops went from building to building checking people's phones for any evidence of anti-Russian activity and if any was found, took them away or shot them.

Ukrainian President Zelenskyy on CBS' Face the nation calls what happened in Bucha, genocide. "When we find people with hands tied behind their back and decapitated, some things I don't comprehend, I don't understand. The kids who were killed and tortured... It wasn't enough just to kill."

The head of NATO, Secretary-General Jens Stoltenberg, told CNN there must be an investigation by the International Criminal Court into what happened in Bucha. "It is a brutality against civilians we haven't seen in Europe for decades," Stoltenberg said.

Beaten back from Kyiv, Russian forces have retreated to the south and east of the country, known as the Donbas region.

Sunday at the Central Evangelical Church in Lviv, where one-third of the congregation are refugees, the choir sang "Amazing Grace." The sermon was about God's love, and loving others.

As world leaders learn of what happened in Bucha, they're comparing it to crimes committed by the Soviet and Nazi regimes in the last century.

And some are calling for even tougher economic penalties on Russia.

Zelenskyy said in a video address on Sunday, "It is time to do everything possible to make the war crimes of the Russian military the last manifestation of such evil on earth."