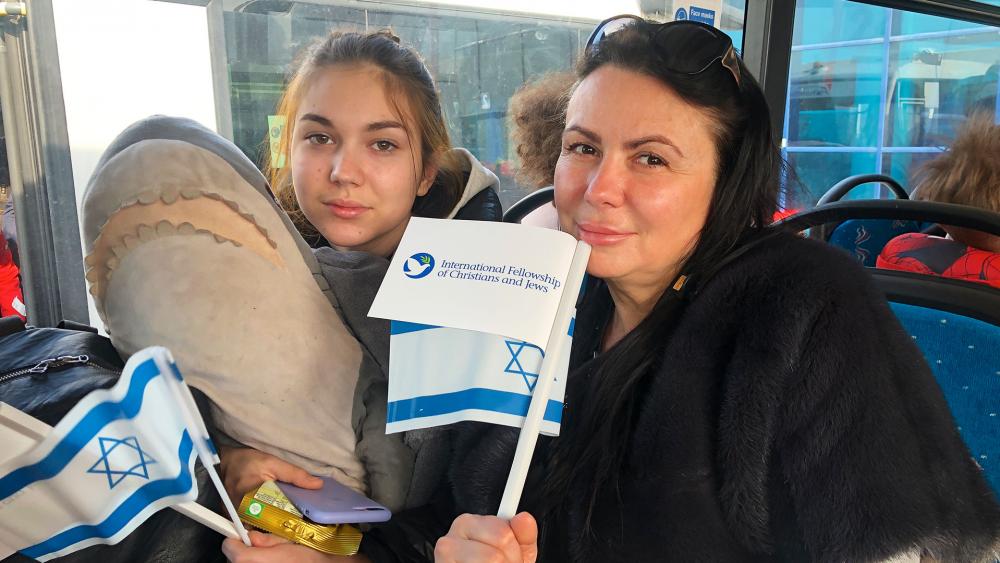 More than four million people have fled Ukraine since Russia invaded in February. Among them are thousands of Jewish people hoping to make a new home in Israel.  Some of them are Holocaust survivors who are fleeing for a second time.

“You can imagine the atmosphere: nervous tension and [an] unpredictable destiny. What can one expect other than being murdered?” asked Zinovii Lekarev, a Holocaust survivor and current refugee from Kharkiv.

“Almost all the buildings around us burned down. It was a miracle that our building didn’t burn,” said Liudmyla Polunova, a Jewish refugee who fled Mariupol. “You understand, when a mortar hits a building, it starts a fire and there are no means to extinguish the fire. There is no water in the city.”

While the forced flight is a nightmare for many fleeing Ukrainians, the Jewish refugees have a unique hope for the future.

﻿“I will say something that I heard in the borders when the Jewish community [is] waiting for people there, and there [were] buses and they know they're going to live. And they know that Israel is helping them to come. They say, ‘if already to be a refugee, it's better to be a Jewish refugee,’” said Benny Hadad, Head of the Aliyah Department of the International Fellowship of Christians and Jews (IFCJ).

The IFCJ is one of the organizations banding together with the Israeli government, the Jewish Agency, and other Jewish groups to make it possible.

Aliona Grossu, CEO of the Jewish Community of the Republic of Moldova,  which borders Ukraine, says when they heard about the war, they knew the world would never be the same.

“So, from this day we have started organizing a rescue operation for the members of the Jewish communities from Ukraine,” Grossu told CBN News.

“Here [in Kishinev] with the Jewish community, with the Joint, with all the organizations, we built an opportunity to have places for the people to sleep, to eat and to be in a safe, warm place,” Hadad told CBN News.

From the border, these refugees are taken either to the Israeli Consulate in Kishinev or the Hub, where the Jewish Agency determines their eligibility to immigrate to Israel, the Foreign Ministry provides them with travel documents, and then IFCJ books them on charter flights. The refugees can choose if they want to go to Israel or elsewhere in Europe. Israel’s emergency medical service, Magen David Adom, also has a team there to treat the fleeing refugees.

CBN News met Liudmyla Polunova, her mother Tetiana, and her 16-year-old son Andreii at the Hub while they were waiting for permission to go to Israel.

“It’s a catastrophe. It was a miracle that we were able to leave Mariupol now,” Liudmyla told us. “On March 12th an aircraft bomb fell next to our house. All the windows, glass, window frames, and doors were shattered in the apartments. It was freezing outside, and it was impossible to stay in the apartment.”

Liudmyla and her family took shelter in the basement of the building for a week.

“We are thankful to the neighbors. We survived because of them. We left thanks to my son. We found out that in the 9-story building next door…there was phone reception on the ninth floor,” Liudmyla explained.

“My son remembered that his classmate lived in the neighboring town of Mangush and her father owned a minibus. My son ran to the 9th floor, called her and her father took us out the very next day,” she said.

It wasn’t the first time this family has had to escape. They fled the Donetsk region under heavy fighting in 2014. This time they have a different outlook.

“We expect peace. We expect some kind of wellbeing, [a] peaceful life. Because we were kicked out of Donetsk, kicked out of Mariupol and now I simply don’t know what to do.  I want a future for my son,” she said.

“I hope everything will go well [in Israel] - that this whole thing will be over. It’s hard to move of course, all my friends are [in Ukraine]. But at least there will be peace [in Israel],” said Andreii.

“I think Israel is our salvation. And I think everything will go well for us. The main thing is for us to be healthy, to be alive because we couldn’t even hope that everything would end so well,” said Tetiana.

During their transit time in Moldova, the refugees are housed at guest houses and hotels in and around Kishinev.

That’s where CBN News met Holocaust survivor Zinovii Lekarev, who crossed the border after he turned 86 on March 16th.

“I didn’t have a birthday. There was bombing and shelling.  That’s why I was at home,” Zinovii told CBN News.

“Two rocket explosions happened about 50-60 meters (164-196 feet) from our house. We were at home. These were frightful explosions. Everything shook. The entire 9-story building was shaking,” Zinovii said with tears in his eyes. “That’s when I decided to leave.”

It brought back scary memories.

“In September 1941 under bombing and shelling of the trains we were in, we left the city. We returned to Kharkiv in March 1944,” he said.

And seventy-eight years later, with just a plastic bag in hand, Zinovii was on the run again. This time he has two daughters, two granddaughters, and a great-granddaughter waiting for him in Israel.

“I haven’t gotten over it yet, haven’t comprehended it. I’m very happy that I’m finally going to leave this hell. But it’s very unpleasant and heavy for me,” he shared.

After the hotels and guest houses were full, the head of the Jewish community donated his printing warehouse for refugees to stay in. It was warm and fully equipped, dormitory-style.

Vera Chymra also recalled her first time having to leave everything behind.

“My first evacuation took place 81 years ago in 1941,” said Vera, while sitting on a mattress on the floor.

“I remember a freight car. There was a transit camp like this.  Only this one is comfortable. Back then the only thing we had was a blanket,” Vera told CBN News.

Vera returned to Kharkiv after World War II and stayed put, never leaving Ukraine again…until now.  This time she left with her daughter, son-in-law, and great-grandson.

“What can I say? I feel more cheerful,” said Vera with a smile on her face.

“I’m able to move again.  Before, I stopped moving. I had COVID with bad complications, my leg was paralyzed,” she explained.

“I couldn’t even imagine that I’d travel such distances as I haven’t left the house for half a year,” she said.

So far, the IFCJ has sponsored more than 2,200 refugees flying to Israel from Moldova since the war started. But it’s not a regular Aliyah.

Hadad says it’s not the same as when they help new immigrants go to Israel. “It's saving [lives] and saving the souls.”

Hadad says they usually have a chance to prepare new immigrants for months before they come.

“Now it's a short time. You’re touching the people for two seconds. They’re coming here, they want as much as [possible] to be done because they live as refugees, here without anything. And the main goal is to send them to Israel and save them from here,” he said.

When the day arrived, CBN News joined 112 former refugees and nine pets on the flight to Tel Aviv.  Among those, who would soon become Israeli citizens were Zinovii, Liudmyla, Tetiana, and Andrei.  Vera had gone on an earlier flight.

In Israel, Liudmyla said they hadn’t yet processed all that had happened to them, but they are happy.

“Thank you God, there’s no shooting. No shooting. I hope I’ll never hear it again,” said Zinovii after his arrival.  “At my age, it’s a new beginning. I don’t know how to explain this. At this age, people hang up their fiddle completely, but I decided to change everything from the start.”

The transition to Israel may not be easy for them, but they’ll be planted in the land of their forefathers, fulfilling biblical prophecy, and should never have to run away again.