Israel Urges West to Reject Emerging Nuclear Deal, Says it Will Give Iran Billions to Use for Terror 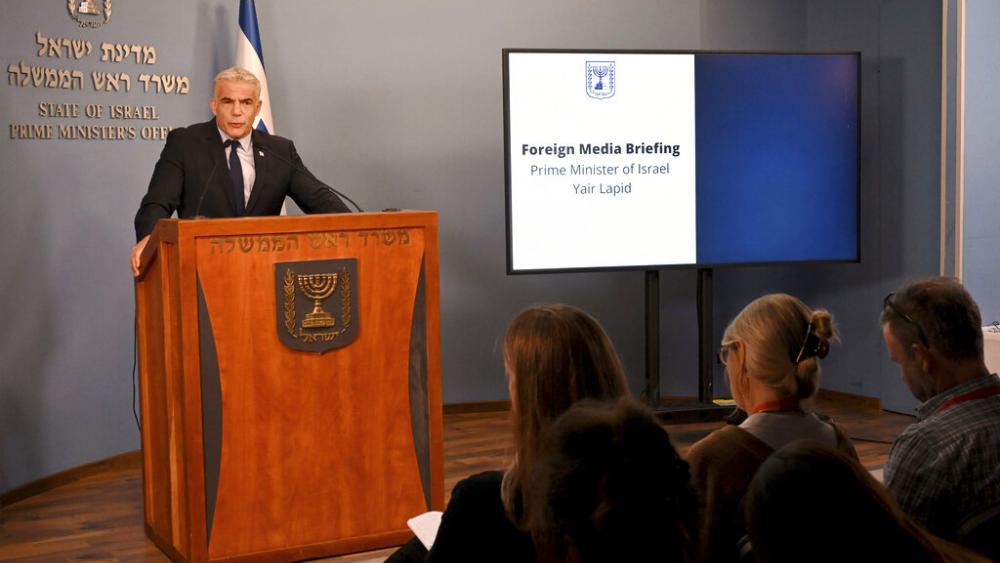 Israeli Prime Minister Yair Lapid speaks about Iran at a security briefing for the foreign press at the prime minister's office in Jerusalem, Wednesday, Aug. 24, 2022. (Debbie Hill/Pool via AP)
6311441392112
Israel Urges West to Reject Emerging Nuclear Deal, Says it Will Give Iran Billions to Use for Terror

JERUSALEM, Israel – Israel and Arab countries are bracing for world powers to re-enter the 2015 Iranian nuclear deal. Some fear the negative impact it’s likely to have on the Middle East and beyond.

Israeli Prime Minister Yair Lapid is still urging the US and other nations to stay away from what he sees as "a bad deal”.

“It would give Iran $100 billion a year,” Lapid said during a press conference on Wednesday. “This money will not build schools or hospitals. This is $100 billion a year that will be used to undermine stability in the Middle East and spread terror around the globe."

His remarks to foreign journalists came as both sides reported progress in the talks.

"Israel is not against any agreement. We are against this agreement because it is a bad one. Because it cannot be accepted as it is written right now. In our eyes, it does not meet the standards set by President Biden himself – preventing Iran from becoming a nuclear state,” he said.

Former Israeli Ambassador to the UN Danny Danon calls it a “shameful moment.”

“When President Biden was elected, he said clearly that he will make sure that the new agreement will be stronger and longer. What we are seeing today is a weaker and shorter agreement that will actually allow Iran to continue with their nuclear ambitions. It will be dangerous for the region,” Danon tells CBN News.

Click above to watch our full interview with Ambassador Danny Danon

The US and other world powers first signed a nuclear deal with Iran in 2015 to place limits on Iran’s nuclear program in exchange for relief from international sanctions. Three years later, then-President Donald Trump withdrew, arguing that the deal was poorly negotiated and did not sufficiently address Iran’s activities in the Middle East. Since then, Iran has openly broken the terms.

Sixteen months ago, the EU began trying to revive the agreement. Supporters argue that the accord was effective in restraining Iran’s nuclear capabilities and believe Iran has become more dangerous in the absence of a deal to limit its nuclear program.

“They want to sign the agreement and to say, ‘We finished with that,’ but that's not the case. That's why together with our allies in the region, we will have to stand strong against Iran and prepare ourselves for every option,” says Danon.

Res. Brig-Gen. Yossi Kuperwasser, from the Jerusalem Center for Public Affairs, says Russia, China, and Iran would benefit from such an agreement.

“From a global point of view this is a very dangerous development because it means that all the three main powers that want to change the global order are making progress to their efforts because they understand there is an American weakness,” says Kuperwasser.

Danon feels a deal would put Israel in a challenging position and believes the US is taking advantage of Israel’s political situation. With upcoming elections and what Danon calls an “inexperienced” leader, he believes the next government would need to do three things:

“First is to isolate Iran. Second is to call for more sanctions and third is to build our military capability. So, if we will have to take care of this threat ourselves, we will have the means to do it,” says Danon.

Despite political differences, Danon maintains when it comes to Iran, Israel will be united.