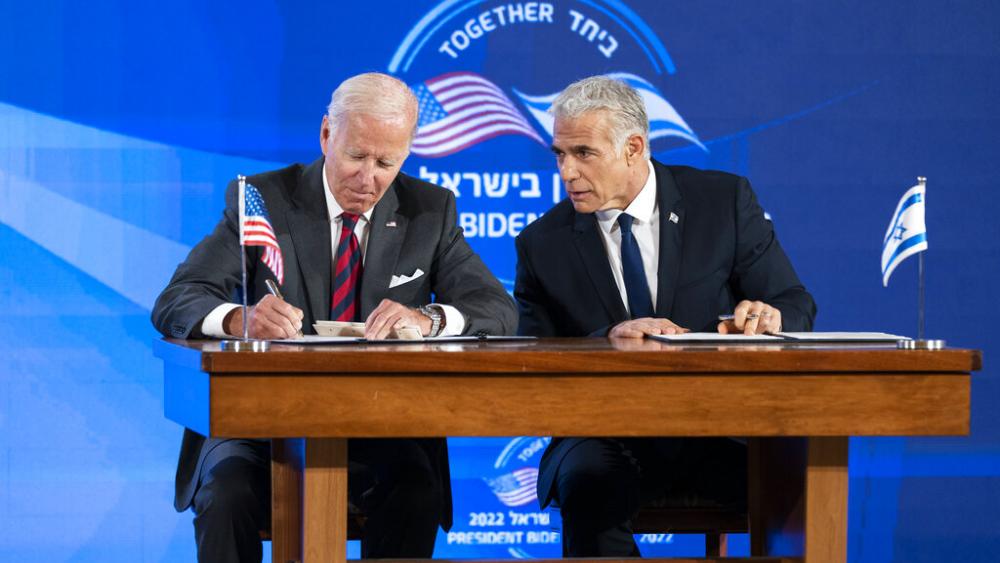 JERUSALEM, Israel – Today, President Joe Biden entered day two of his visit to Israel. The trip’s goal is to strengthen the relationship between the US and Israel.

On day one of president Biden’s trip, he declared his loyalty to Israel.

“The connection between the Israeli people and the American people is bone deep. It’s bone-deep,” said Biden.

After the welcoming ceremonies, he toured a display of Israel’s anti-missile systems including the Iron Dome and the laser Iron Beam system.

On Thursday, the meeting between President Biden and acting Prime Minister Yair Lapid resulted in what they call the "Jerusalem Declaration," a strategic partnership that reaffirms the "unbreakable bonds between our two countries and the enduring commitment of the United States to Israel’s security.”

Lapid believes the relationship will affect the region.

“From here, from Jerusalem, the eternal capital of the state of Israel.  You will travel to Saudi Arabia.  Your visit to Saudi Arabia is important for Israel and for the entire region.  For our security and for future and for the prosperity of the Middle East.," said Lapid.

The declaration is seen as the centerpiece of Biden’s visit. While it includes wording about using “all elements of national power” to prevent Iran from becoming a nuclear power, some critics question whether the Biden administration has been confronting or courting Iran.

“We are 18 months into the US administration of Joe Biden’s presidency. He has been engaging the Iranian regime in Vienna, talks trying to re-enter the 2015 JCPOA Iran deal to no success,” says CBN News contributor Ellie Cohanim. “And this is the common link throughout the region, with the moderate states that they are all being threatened by the Iranian regime, and the real question hanging over his head is if he’s going to address this threat in a serious way.”

Israel's Channel 12 asked Biden about former statements that he would not allow Iran to get a nuclear weapon. President Biden said Wednesday night that military force is on the table as a “last resort.”

“The only thing worse than the Iran that exists now is an Iran with nuclear weapons,” Biden said during an interview with Israel’s Channel 12. When asked about using military force against Iran, Biden said, “If that was the last resort, yes.”

Cohanim points out that since Biden entered the White House, Iran has only moved closer to getting a nuclear bomb – a reality Biden's administration says is a result of the Trump administration unilaterally abandoning the Iranian nuclear deal in 2018.

“It’s exactly what has taken place in these last 18 months. As the US has been engaging in these indirect negotiations, through Russia and China believe it or not, with the Iranian regime. The Iranians have advanced their nuclear capabilities. They’ve also advanced their ballistic missile testing. They are just becoming more of a threat to the region and also to the United States,” Cohanim says.

“Joe Biden has the moments right now, the opportunity to correct course for the United States, to really stand against the Iranian regime. That would be by putting the military option back on the table. To put a deadline on these endless negotiations and to stand firmly with our allies in the region,” says Cohanim.

Biden said in a Thursday press conference with Lapid that the United States is "not going to wait forever" for Iran to rejoin the deal.

“Joe Biden has indicated, or the White House has indicated, that he will be visiting a site in Jerusalem, Israel’s capital where he will not permit Israeli officials to attend, where he will meet with the enemies of Israel, those who continue to be enemies of Israel and then not allow Israeli officials to be with him. That’s actually outrageous,” says Cohanim.

Thursday night, Biden will attend the opening of the Maccabiah games, also known as the “Jewish Olympics.” He will meet with Palestinian Authority President Mahmoud Abbas on Friday and then on to Saudi Arabia to meet with the crown prince.