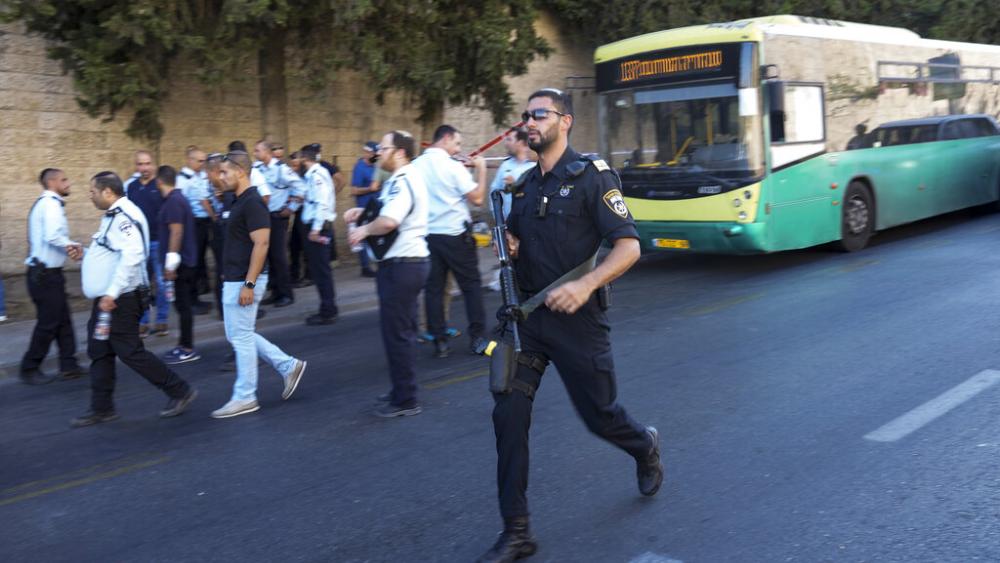 Israeli police officers work at the site of an attack in Jerusalem, Tuesday, July 19, 2022. AP Photo.

JERUSALEM, Israel – Israeli police say a Palestinian terrorist stabbed a man on a bus in Jerusalem on Tuesday before being shot dead by a bystander.

The assailant attacked a man in his 40s with a screwdriver during a bus ride, police said. The victim was moderately injured in the attack and taken to a nearby hospital.

A Ynet news photographer shot the alleged attacker before officers arrived at the scene.

“I got out of the car, loaded my gun and realized it was a terror attack. The stabber came to me, I did not hesitate and fired one bullet at him. I heard him praying in Arabic,” Meshi Ben Ami told the Kan public broadcaster.

“I would like to wish a speedy recovery to the victim who was injured in the stabbing incident in Jerusalem. I congratulate the Ynet photographer who happened to be at the scene and acted resolutely to neutralize the terrorist and prevent injury to other people,” he said.

“We will not allow terrorism to rear its head and disrupt the routine of our lives. We will settle scores with anyone who tries to harm innocent civilians,” Lapid added.

The Hamas terror group called the stabbing an “act of heroism” but did not claim responsibility for the attack.

“The attack once again emphasizes the failure of attempts to stop the resistance in the occupied West Bank and the city of Jerusalem,” a Hamas spokesperson said in a statement.

Just hours before the attack, Israel carried out airstrikes on the Gaza Strip in retaliation for a gunshot fired into southern Israel from the Hamas-ruled territory. The military said the bullet hit an industrial building in southern Israel but no one was injured in the incident.

While no one claimed responsibility for the bullet, Israel holds Hamas responsible for everything that happens in Gaza.

Gaza terrorists also fired rockets into southern Israel over the weekend. Israel’s military said it responded by pounding Hamas targets, which will “significantly impede” the terror group’s ability to manufacture and fire rockets at Israeli civilians.