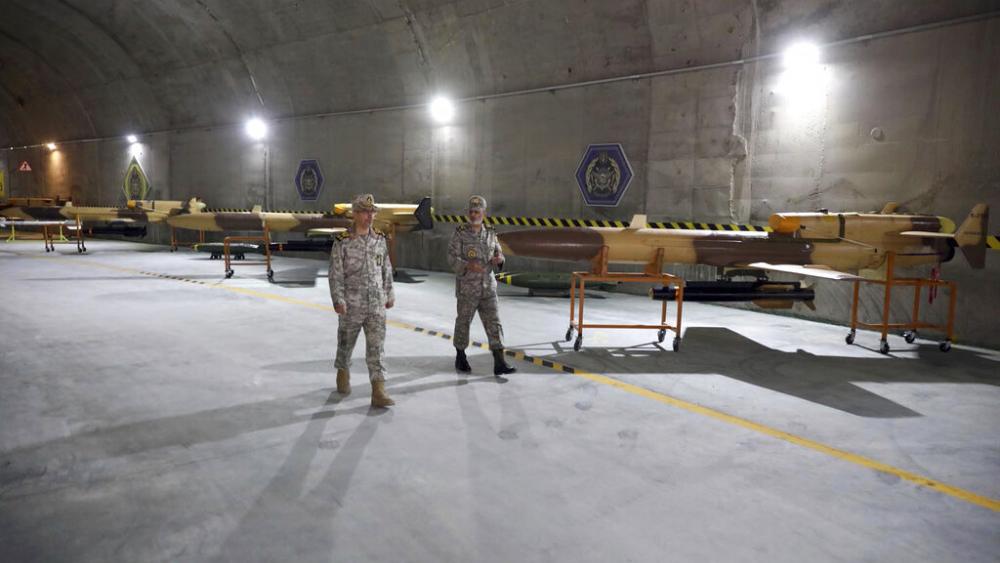 In this photo released on Saturday, May 28, 2022 by website of the Iranian Army, Iranian officials visit n underground drone base tunnel of the Army in the heart of the country's western Zagros Mountains. (Iranian Army via AP)

JERUSALEM, Israel —The White House believes Iran is preparing to send hundreds of unmanned aerial vehicles — including armed drones — to Russia for use in its war against Ukraine.

US National Security Adviser Jake Sullivan told reporters on Monday that the war is inflicting “severe damage” on Russian forces, and Moscow is turning to Iran for help.

“Our information indicates that the Iranian government is preparing to provide Russia with up to several hundred UAVs, including weapons capable UAVs, on an expedited, expedited timeline. Our information further indicates that Iran is preparing to train Russian forces to use these UAVs with initial training sessions slated to begin as soon as early July,” Sullivan said.

It's unclear whether Iran has already transferred the weapons to Russia, he added.

The news comes as President Joe Biden prepares to visit Israel and Saudi Arabia this week.

Biden has said the trip would primarily focus on national security issues facing the Jewish State and the budding relationships between Israel and its Arab neighbors.

The president also hopes to reset relations with Saudi Arabia, a reversal of his campaign pledge to make the kingdom a “pariah” for its human rights abuses and the 2018 murder of dissident journalist Jamal Khashoggi.

Biden defended his decision to visit Saudi Arabia against backlash from human rights groups in a Washington Post Op-Ed, arguing that the US must work with Saudi Arabia to compete against Russia and China.

“We have to counter Russia’s aggression, put ourselves in the best possible position to outcompete China, and work for greater stability in a consequential region of the world. To do these things, we have to engage directly with countries that can impact those outcomes. Saudi Arabia is one of them, and when I meet with Saudi leaders on Friday, my aim will be to strengthen a strategic partnership going forward that’s based on mutual interests and responsibilities, while also holding true to fundamental American values,” said Biden.

Biden also said his team is already working with Saudi Arabia to help stabilize oil markets in the face of rising gas prices around the globe. It’s unclear if Biden will be able to secure a pledge for more oil from Saudi Arabia, and experts say such a commitment will do little to bring down oil costs because the kingdom already has a very limited spare capacity.

Still, Biden aims to present Saudi Arabia as a strategic partner in the Middle East, especially since the kingdom, like Israel and the US, sees Iran as a growing threat.

The Wall Street Journal reported in June that Biden administration officials held a secret meeting in March with top military leaders from Israel and Arab countries to discuss how to counter Iran’s growing threat to the region. That meeting included military leaders from Saudi Arabia, Qatar, Jordan, the United Arab Emirates, Egypt and Bahrain, the report said.

While Washington hopes to build on Israel’s growing relationship with its neighbors – which was made possible through the Abraham Accords – it does not appear Saudi Arabia is ready to normalize ties with the Jewish state yet.

The White House said on Monday that normalization between the two nations will be a “long progress.”