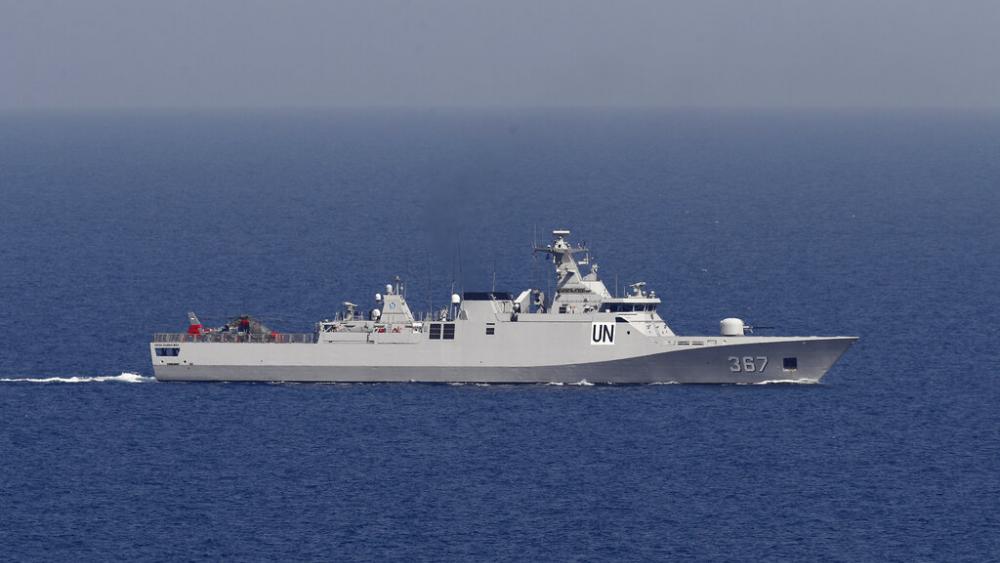 A UNIFIL Navy ship patrols in the Mediterranean Sea next to a base of the U.N. peacekeeping force, while Lebanon and Israel resumed indirect talks over their disputed maritime border. AP Photo.

BEIRUT (AP) — The leader of Lebanon’s militant Hezbollah group threatened Thursday to strike a gas rig Israel is setting up in the Mediterranean Sea and that Lebanon claims is in a disputed maritime area between the two countries.

Israel says the location is part of its U.N.-recognized exclusive economic zone.

Hezbollah’s Hassan Nasrallah, a staunch Iran ally, denounced in a televised address what he described as Israeli provocations in the maritime area.

His speech followed a warning by Lebanese President Michel Aoun last Sunday who said that maritime border negotiations between the two countries have not ended, adding that any move by Israel — such as drilling in the Karish field that Beirut calls disputed — will be considered “a provocation and hostile act.”

Earlier this week, Energean Power, a floating production, storage and offloading unit belonging to the energy exploration and production company Energean, arrived in the Karish field. The company is listed in London and Tel Aviv and the ship’s arrival triggered alarm in Lebanon.

Aoun and Lebanon's caretaker Prime Minister Najib Mikati invited a U.S. envoy mediating between Lebanon and Israel to return to Beirut to try and work out an agreement. Amos Hochstein, a senior adviser for energy security at the U.S. State Department, is expected to arrive in Beirut the next few days.

The U.S.-mediated indirect talks between Lebanon and Israel have been stalled for months amid disagreement within Lebanon over how big the disputed area is.

Nasrallah said Israel should wait for the results of the negotiations and that any drilling that takes place before an agreement will be considered a direct assault on Lebanon.

“All options are on the table,” he said, adding that all security measures that the Israeli military takes will not be able to protect the gas rig.

The ship and its owners, he said, should know that they are “partners in the aggression on Lebanon taking place today,” Nasrallah said, calling for its immediate withdrawal from the area. “They bear full responsibility for what could happen to this ship, both in material damage and to its crew.”

Israel and the powerful Hezbollah group, which is armed and funded by Iran, are bitter enemies that fought an inconclusive, monthlong war in 2006. Since then, the border area has remained tense but mostly quiet.