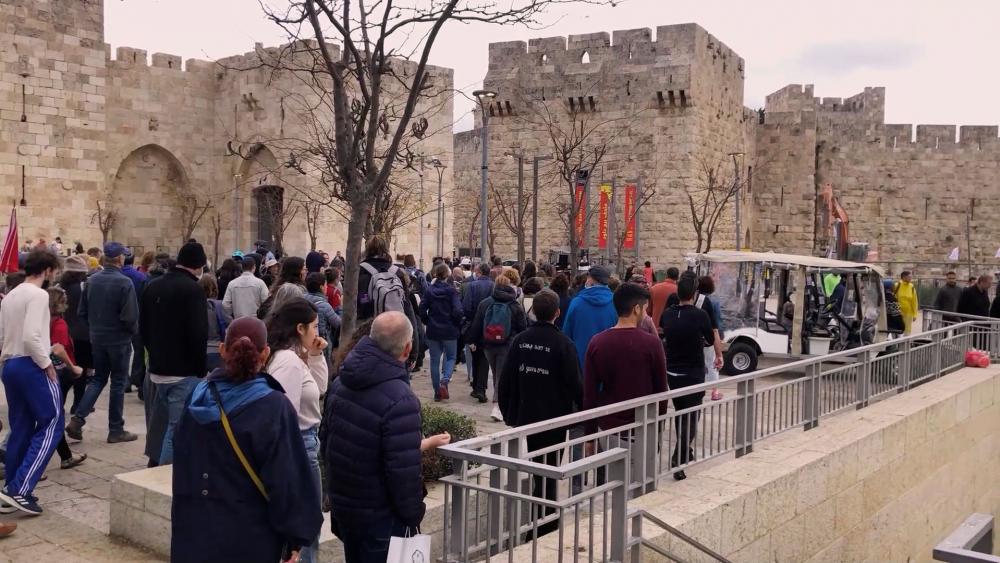 Tourists at Jaffa Gate in Jerusalem, Photo Credit: CBN News.
6314874220112
Israelis and Tourists Both Celebrate as Visitors Return to the Holy Land in Pre-Pandemic Numbers

JERUSALEM, Israel – When COVID closed Israel’s borders in 2020, it virtually shut down businesses depending on tourism.  As restrictions lifted in March of this year, the long wait for visitors ended and Christians from around the world are flocking back to the Holy Land.

Tour buses once again line the streets of Jerusalem, while boats full of tourists are back on the Sea of Galilee.

Galilee Worship Boats Captain Daniel Carmel welcomes the change."(It’s) not like in the year of 2019, but it is so blessed. Hallelujah! We have groups and we have no complaints,” he exclaimed.

CBN News joined Carmel and a group of more than 40 Brazilians, many who were making return trips to Israel. Sara Limasilverio from Sao Paulo first visited in 2008 as a 15-year-old.

“It feels amazing, and I was waiting for this moment,” she said. “Our trip changed like three or four times because of the pandemic. But now that we’re here, we’re enjoying every single moment. The presence of God, it’s so beautiful. And the joy of the Holy Spirit on us, it’s amazing,” she continued.

For two years Israel’s borders were virtually closed to tourists, with few exceptions. But since all the restrictions were lifted in March, it’s as if the floodgates were opened, with visitors returning from all over the world.

Sonia Farro came with her Catholic prayer group from Costa Rica. “I think it's great. I think it's beautiful, amazing to walk in the land of Jesus Christ. We are Catholic and of course for us [it] is a gift from the Lord,” she said.

Margaret, a pilgrim originally from India, now lives in Little Rock, Arkansas, and was making her first trip to Israel. She had been dreaming of visiting for more than 30 years. “Both myself and my husband, we both wanted to visit, but unfortunately, he passed away. So, my son brought me here this time,” she explained

Silvana, who came from Italy, was eager to see the place where Jesus was born in Bethlehem. When she arrived, though, she found there was much more to see. “Now I understand that there are also other parts of Israel that are interesting for the Bible,” she said.

The Bikki family also is originally from India, but lives in Detroit. Srinivas Bikki is back after 8 years.  “It’s a holy place, and you know, I would like to visit as many times as possible,” he said. “It gives so much joy, right?  To be here and to walk through the Bible. We read the Bible, but to see, you know, with your own eyes, it’s a different experience.”

Sanjana Bikki, Srinivas’ daughter, was visiting for the first time. “I just thought it was really surprising how, when we were crossing from Jordan to Israel, like I know this is like the Promised Land, but you can quite literally see how the barren land just turns into full – like yeah, there's so many plants and there's so much life, like all of a sudden just right over the border, and it's just crazy to like see that,” she said.

Adam Arbel from Israel’s Ministry of Tourism says visitors from the United States in July and August surpassed the 2019 totals for those months.

“Incoming tourism to Israel has steadily increased since we fully reopened our gates [a] few months ago,” he told CBN News. “Most of the tourists from the United States are evangelicals.”

That includes Passages – an organization that brings Christian university students to the Holy Land.

“It's such an incredible experience and opportunity to be able to come to the Holy Land as a Christian and as a college student,” said Elizabeth Youssef from the University of North Carolina. “And it's never something that I ever thought that I would have the opportunity to do, and it really has just been a life-changing experience, and being able to actually like, see the places that I've been reading about, like my entire life,” she added.

Another UNC student, Landon Rice, remarked, “I am overwhelmed (by) the beauty of this land, but also just the cultural and religious history, and how it's all kind of interwoven together.” Rice noted that he also learned more about the geopolitical conflict in the Middle East and added, “It’s all kind of centered here in Jerusalem.”

Given Israel’s popularity with international tourists, Arbel said the government acted rather than just wait for the pandemic to end.

"During the COVID we took the opportunity to upgrade our tourism sites to improve the tourism infrastructure and to build new hotels," he explained.

Another downturn resulted from the war since high numbers of Russians and Ukrainians usually visit Israel. Fortunately, others are expected to take their place.

By the end of 2022, Israel expects the year’s total number of visitors to reach about two and a half million. As tourism continues to climb steadily each month, leaders are happy that the Holy Land is back on the global priority list.